Hey dreamers! Did you take your vitamins this week? Did you take your pet to the vet? Way to be responsible. I did neither, but yesterday I ate the most delicious fries. They had hot peppers and garlic and duck(!) and other ingredients I cannot pronounce but do not regret putting in my mouth. Though they did give me terrifying nightmares. But today is a new day! More specifically, it’s that lovely day when we remember what we said to each other in the past week. We had some good times, huh?

First off, Laura reminded us that some elusive Autostraddle merch is back (the “straddle this” shirts, guys!)! We expect you all to be wearing AS swag to brunch this weekend, okay? Or maybe a pretty sundress? Lizz, fresh from her stickering tour across the pond, recapped PLL 304 and 305 even though there weren’t too many homosexy parts. Lemon saw Beasts of the Southern Wild and Jamie and Gabby watched United In Anger and you should too. Crystal introduced us to Sally Whitwell and hit us with another Music Fix while Carmen reviewed Frank Ocean’s new album. Rachel treated you to some aural pleasure with her For Queers By Queers playlist and Lemon gave us another reason to like Willow Smith. Laura showed us how to make a DIY beauty bar and Lizz showed us how dress to get wet with the best of the best boyshorts.
Then Malaika had us obsessing over afros and Kate reminded us that it’s still okay to obsess over Lisa Frank. We talked about a queer love story in Bollywood and watched Abby Wambach strip down for Sports Illustrated. Whitney gave tips on how to stay close to faraway friends and Riese talked to The Nanny Diaries authors Emma McLauglin and Nicola Kraus about their new Britney-inspired book. In news that doesn’t necessarily surprise us, Jan Brewer was mean to the gays (though she got called on it this time),  The NY Daily News used some wildly offensive language in a case involving a transgender maid and Mitt Romney looked like a tool, perhaps intentionally, during his speech to the NAACP. We let out a collective groan as TRLW Season 3 premiered. But don’t worry, our drinking game and the power of the clam pasta recipe will help ease the pain. Also, HBO is doing a documentary on relationships so how about you and your ladyfriend audition and actually make us look good? Riese read more things and Dina talked about the limits on health resources for queers in Queensland right now. Keep your chin up though, now there’s a lesbian super PAC looking to push our agenda in politics and some conservatives are even getting on marriage equality train. Oh, and Episcopals like us too!  Plus, True Blood, boobs, picnic noms, Comic Con, Amy Poehler and awards for excellence in gay journalism  — what more do you want from us? How about this — Allison Weiss is coming to A-Camp and maybe you still can too! And remember when you said that thing that made us happy?

The This Is Why We’re Sponsored By o.b. Award to NeverDaughter: “That moment when you realize that you’re totally gonna have your period this weekend.”

On Abby Wambach Is Naked In This Video:

The Versatile Award to kpee: 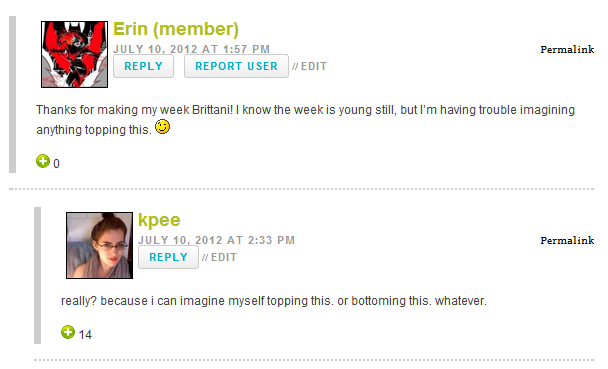 The Only If Your Life Is Directed By IFC Award to meghan: “Does just living in LA qualify as watching this show?”

On True Confessions of a Queer Lisa Frank Enthusiast:

The Most Colorful TrapperKeeper Award to Linda: “Also, the model in the center of that ad and the caption ‘Wear Lisa Frank and Share the Lifestyle!’ …LOL. Lisa Frank: reppin’ queer girls since 1980.”

The Do They Have A Box For That On the Census? Award to AG:

The You Had Me at Meat Tornado Award to birobot: “I’m sorry, but it is impossible for me to dislike anything that has Ron Swanson dancing.”