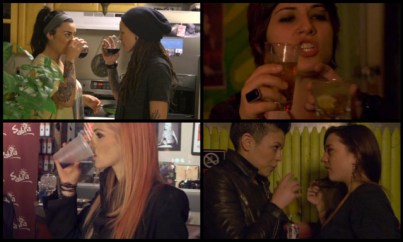 Well, it’s Thursday, July 12th, the day I’ve been dreading since the moment I heard that The Real L Word would premiere on Thursday, July 12th. If you’re just tuning in, here’s the gist: I hate this show (and reality TV in general) but unfortunately am apparently quite adept at recapping it and because said recaps garner ‘mad hits’ for this website, I persevere.

However, recapping The Real L Word requires massive doses of mind-altering substances. One of those substances is alcohol. I’m tempted to make a Real L Word Drinking Game that advises you to drink excessively if you plan on watching The Real L Word, but when I did that for Glee, I ended up drinking so much that I had to not drink again for another two weeks.

I also considered Brittani’s suggestion of “drink every time you see a black person,” but I don’t feel like that would get you drunk enough to watch this show.

So, here’s the game! Add your suggestions in the comments.

+ Cast member declares that they are in love

+ Anyone has sex in the shower or other body of water

+ Every incident of “Whitney Self-Inquiry” (e.g., “Will I hook up with Sara? Maybe.” “Do I have feelings for bananas? I do.” “Do I even fucking care anymore? No I don’t fucking care.”)

+ The “east coast / west coast” “rivalry” is mentioned or a cast member discusses the differences between the two cities.

+ Any appearance by an Autostraddle-associated human

+ Anyone references or engages in sex with a dude

+ Anybody is wearing earrings you could fit your fist through

+ Kacy & Cori are in a scene that does not take place on their couch, at a restaurant or at the doctor’s office.

+ Somer is late for something 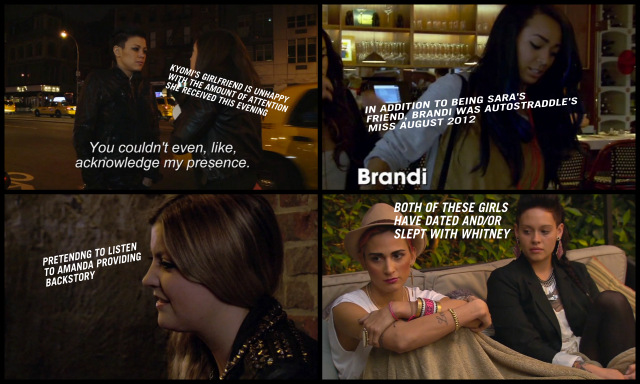 + Somebody cheats on their significant other

+ Somer is on time for something

+ Somer quits or is kicked out of Hunter Valentine

+ Alyssa talks about herself in an interview

+ The show inspires you to cry real tears