Mitt Romney made an asshat of himself yesterday at the NAACP Convention in Houston, Texas, as he pledged to eliminate Obamacare and told the audience that if they had been searching for a man to make things better in the African American community, they were looking right at him, going so far as to helpfully instruct the audience “You take a look.” These and other ill-advised messages to the nation’s most influential civil rights organizations were soundly booed. However, he was met with enthusiastic applause when he brought up his oppositional views on gay marriage, despite the fact that the NAACP passed a resolution in support of marriage equality nearly two months ago.

Early in the speech, Romney claims to “hope to represent all Americans, of every race, creed and sexual orientation.” Except apparently the gay ones who want to get married. He attempted to parlay this into an appeal to black voters, whom he assumed are “pro-family” in the way that means “anti-gay,” with a quote from NAACP executive director Dr. Benjamin Hooks: “The family remains the bulwark and the mainstay of the Black community. That great truth must not be overlooked.” Romney went on to say, “Any policy that lifts up and honors the family is going to be good for the country, and that must be our goal. As president, I will promote strong families, and I will defend traditional marriage.”

It seems Romney did not get the memo from the young conservatives for the Freedom to Marry that gay marriage is actually in line with the Republican Party’s traditional values such as “limited government, personal freedom, and family values.” In fact, according to Human Rights Campaign spokesperson Fred Sainz, Romney doesn’t even approve of civil unions, an extremist position he doesn’t even share with former President George W. Bush.

Not surprisingly, Romney’s pledge to fight marriage equality was praised by the National Organization for Marriage. NOM president Brian Brown said, “Governor Romney has it exactly right that marriage as the union of one man and one woman is a pro-family policy that uplifts American families, especially in the black community.” Lacking from Brown’s praise was, of course, exactly how the black community is uplifted by discrimination against gay people. 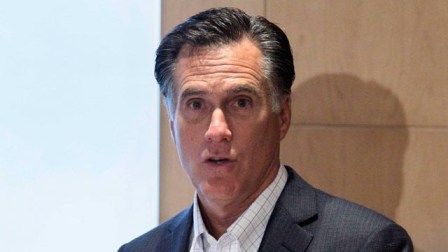 The applause Romney received for voicing this opinion was merely the eye of a shit storm of the audience’s displeasure. But it was a shit storm that he planned to walk into. Shortly after his speech, Romney confirmed on Fox, “I think we expected that.” And it was an expectation that was politically calculated. According to Rachel Maddow, “It seemed like Mitt Romney wanted to get booed… He wanted to wear that around his neck like a badge of courage. It looks like he is not wasting any time in doing so.”

Later that night, Romney processed his feelings about the boos at a fundraiser. He said, “Your friends who like Obamacare, you remind them of this, if they want more stuff from the government tell them to go vote for the other guy — more free stuff. But don’t forget that nothing is really free.” Then again, this is coming from a guy with a net worth of two hundred million dollars, which probably makes everything feel free. Romney’s motivation for giving such a speech to the NAACP remains sketchy. It seems like a risky move for a politician, but considering that 96% of African Americans say they would vote for Obama, he didn’t have a lot to lose. It seems that his words were meant for an audience other than the one in front of him, to show his supporters that he isn’t tailoring his platforms to fit the people he’s speaking to. So if anyone in Romney’s camp had any doubt that his hyper-privileged and homophobic views were in danger of changing, they can now rest easy.

sign up for our newsletter
Related:2012 presidential raceDaily Fixmitt romney