Every time my family gets together, my grandma finds a lull in the conversation to ask me if I’m still a Democrat. I usually say yes, and that I’ll die a dirty liberal. She then makes some offhanded remark about how she’ll always be a Republican. Still, she asks every time. Last Sunday night, I finally said, “Why would I vote for someone who hates me?”

But maybe I’m wrong. At the very least, I’m not completely right. Enter: A new campaign from Freedom to Marry.

Freedom to Marry is a non-partisan marriage equality activist group, “working to win the freedom to marry in more states, grow the national majority for marriage, and end federal marriage discrimination.” The website lists the steps needing to be taken to gain equal marriage rights in a handy-dandy Roadmap to Victory. They also have talking points on why marriage matters, and who supports marriage equality.

In a new effort to combat this he-man-gay-haters-club image the GOP has going for them, young conservatives are working with Freedom to Marry to introduce a campaign for marriage equality, focusing on how allowing same-sex marriage is directly in line with traditional GOP ideologies, such as limited government, personal freedom, and family values.

The idea for the campaign arose from meetings last year that Freedom to Marry hosted with conservatives and libertarians. It was made clear in those meetings that young conservatives are increasingly in support of marriage equality. In fact, in pretty much a million polls, the numbers show that young people overwhelmingly favor marriage equality. That’s pretty good news, right? 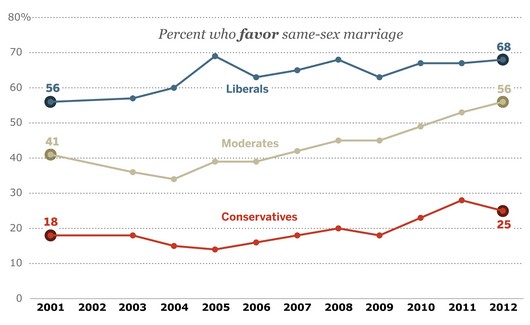 “The one thing we found… is there were a lot of young people who came, and they pretty much all supported the freedom to marry… They felt there wasn’t really a place for them — an organized place for them to be both conservative and support gay and lesbian couples’ freedom to marry. So this was an outgrowth of that.”

Young Conservatives for the Freedom to Marry is being lead by a group of nine young conservatives, both gay and straight. The leadership committee includes Tyler Deaton, a lobbyist and political consultant, Margaret Hoover, a Republican consultant and CNN political commentator, Nicole Neily, the vice president of Dezenhall Resources, Torrey Shearer, a government relations professional, and Craig Stowell, a Marine Corps veteran who you may recognize from this speech he gave in New Hampshire during the marriage equality debate there. There are a few others on the committee, and it’s clear to see that the campaign has chosen public figures wisely in regards to their experience and accessibility to young people as well as Republican congressional members. 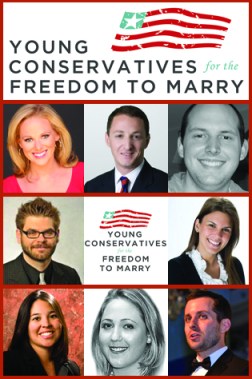 Via Freedom to Marry

GOP members fear that if the Republican Party doesn’t shift its views to accommodate young conservatives, it could lose support over time. Torrey Shearer agrees, openly opposing the House GOP’s decision to defend the Defense of Marriage Act. He said, “[The Republican Party] is a little out of touch,” adding that young conservatives are more focused on economy than social issues.

In arguing that marriage equality and conservatism can coexist happily, the campaign has been focusing on traditional GOP ideologies. Shearer said, “We need to emphasize the Republican Party’s history with limited government and personal responsibility and personal freedom…”

Another member of the leadership committee, Tyler Deaton, said, “…when two people want to join together for life and build a family, that’s an attitude conservatives should embrace.” Aligning same-sex marriage with GOP ideals is almost ingenius. I think this is an infinitely more effective approach than “Love is love is love” or “Let’s give them all the same rights but we won’t call it marriage.” This is something young conservatives (and older ones, alike) haven’t seen before. By taking out the ‘moral’ question of marriage equality and instead communicating it in Republican lingo itself, this campaign may have found a way to get someone to listen. 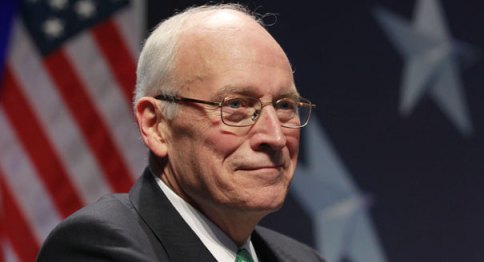 If this guy can support marriage equality, there’s hope for everyone. via Politico

Freedom to Marry’s website also has a list of popular conservatives in favor of marriage equality, including Laura Bush, Former RNC Chairman Ken Mehlman, and, perhaps most importantly, Carrie Underwood.

Deaton said, “There are a lot of people in the Republican party right now who are trying to decide what the next step will be… This is our next step: The Republican Party should embrace personal freedom, should embrace the freedom to marry.” Oh man, I agree with a young conservative on something. Don’t tell my grandma. 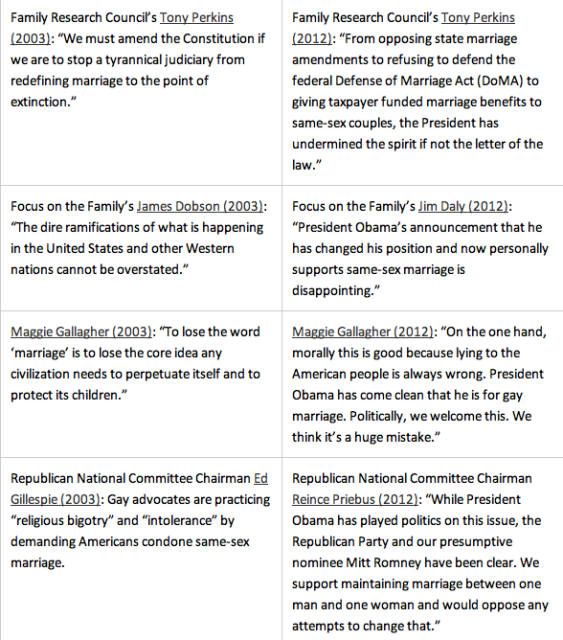 But back to the question of ‘morality’ that’s always at the heart of the GOP’s argument. It’s incredibly interesting to see how social conservative views have changed in less than a decade. They may have come a long way from “same-sex marriage will be the death of our nation,” but they still find it “disappointing.”

This campaign is for positive change, but what is it ultimately advancing? It might not be enough. The social conservatives of this nation have been around for a while: Focus on the Family was founded in 1977 and Jerry Falwell founded Moral Majority in 1979. Their message has always been clear — maintain a Christian moral foundation in American politics. They do this with a lot of money.

Regardless of what is right or good or fitting in nicely with GOP traditions, it comes down to money, doesn’t it? For example, in 2011 Focus on the Family spent just over $100,000 on things like broadcasts, publications, and events. The National Organization of Marriage has a specific Marriage PAC. It’s this kind of monetary status that will change the marriage equality game, unfortunately.

This Freedom to Marry campaign is important and groundbreaking in that many public figures are coming together in support of marriage equality and furthering an awareness of how marriage equality can line up with GOP values, but ultimately, I doubt much will be accomplished. Freedom to Marry is an important organization with a lot of great goals, but this facet, this campaign’s message, will be hard to hear over the very rich and “philanthropic” social conservatives in the Republican Party. At the end of the day, there will still be people like Mitt Romney and Focus on the Family’s Jim Daly, whose minds won’t be as easily swayed by popular opinion. Not when God’s on their side, after all.

The Young Conservatives for the Freedom to Marry campaign officially launched with a reception last night on Capital Hill, and you can like their Facebook page here (it’s called YoungCons4Marriage, which just makes me laugh).

They’re also hoping to host a brunch at the Republican National Convention. I think the brunch is a great idea, obviously.