Welcome to this humble recap of Supergirl episode 604, Lost Souls. This episode had some of my favorite scenes of the albeit short first half of the season so far, so let’s hop into our pods and hope we don’t get knocked off course, shall we?

Previously on Supergirl, a Phantom got loose on Earth and started spreading its Phantom-ness faster than syphilis in the Middle Ages, M’gann almost got Phantom’d, Kara got stuck in the Phantom Zone and found her father stranded there and also a fifth dimensional imp named Nyxly.

Speaking of the trapped trio, Kara, Nyxly and Father Zor-El use impy powers to portal to the anchor; the Phantom Chills are starting to get to Kara and dad is worried, but they’re almost home, Kara can feel it. 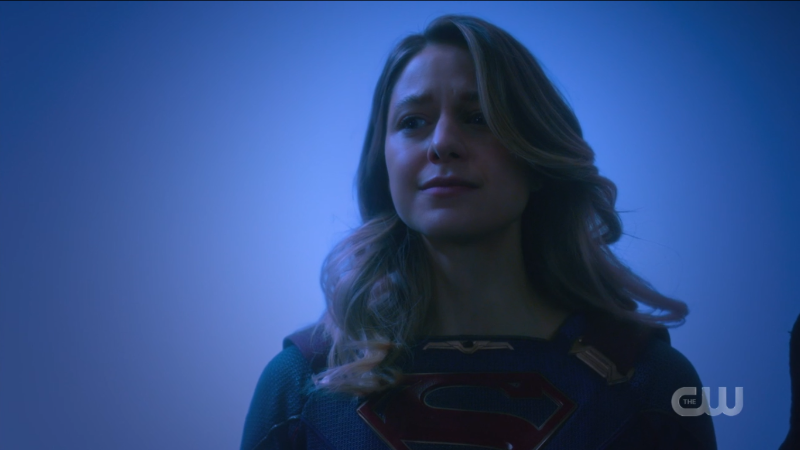 Kara Danvers IS love in a hopeless place.

Back home, M’gann is recovering in the Tower’s med bay and seeing a den of icicles and soul particles and Phantoms, oh my. Alex and J’onn come back to report that there are an increasing number of Phantoms and they have to stop the spread before it becomes…a global pandemic. Genuinely furious they included that line but they made up for it later so I’ll let it slide I guess.

Nia walks in with Lena in tow, having just completed the full tour of the Tower I wish we also got, and everyone officially welcomes Lena to Team Superfriends. M’gann tells the newly assembled team about her visions and that she thinks she’s connected to the Phantoms in a way that could lead them to Kara, and Alex and Lena are equally thrilled about this. Also, Lena was so excited about her official first day on the team, and casually built a long-distance phantom trap backpack. Brainy thinks it’s just like Ghostbusters but Lena points out that this is real. 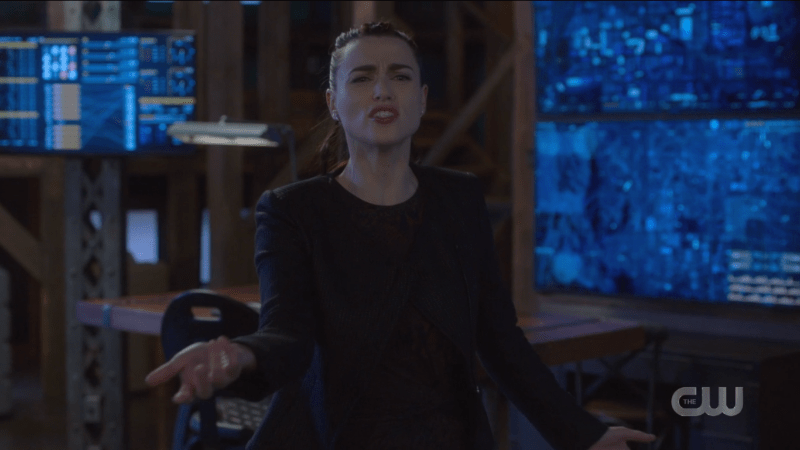 So Alex and Lena stay behind to monitor things while the Team goes out to stop more Phantoms. They get there in time to stop the original Phantom from getting away, but not before a woman is turned. They start to fight it but Nia gets distracted by another vision of Midvale High and the Prime Phantom shows up, bigger than ever for having feasted on so many souls. The Prime takes its newly sired Phantom and bamfs the heck outta there.

M’gann and J’onn chase the soul that left the woman’s body to try to find the Phantom Lair, but the closer M’gann gets to it, the more she runs out of steam, until finally she starts to fall out of the sky. Luckily J’onn catches her and brings her back to safety and the Superfriends decide they need to regroup.

In the Phantom Zone, Kara and her pops find the control room they were looking for, but the portal mirror is broken, because of course it is. Kara thinks Nyxly’s magic could fix it, but it doesn’t seem to work. Dad is ready to give up right then and there, but Kara thinks that’s the dumbest thing he’s ever said and he once said “you’ll be safe in this pod.” Kara points out all the unlikely wins they’ve already had; they found an ally, magic, each other. They can’t give up now! 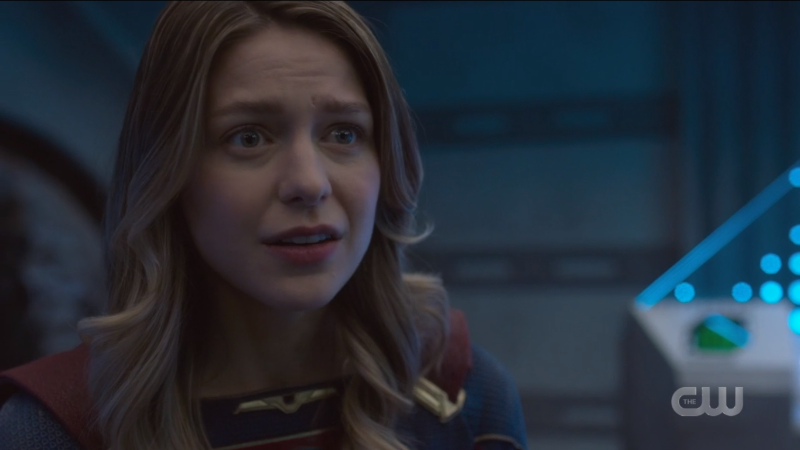 “Please, if we don’t get back, they’ll make Superman the star of this show, too!”

Kara knows her mom and knows she would have had a backup just in case, so they go on a hunt for the emergency portal mirror.

The Superfriends are in a bit of a pickle. They have to find the Soul Chrysalis before it hardens and the Prime’s UberPhantom transformation is complete. M’gann wants to find Supergirl’s location first, but Brainy doesn’t think they have time. Alex says they’ll just have to do both at once. 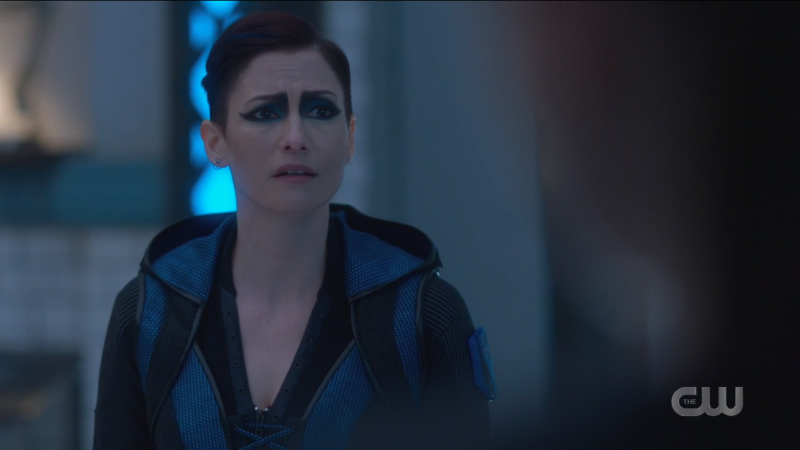 :is distracted thinking about Kelly and Lena…at once:

Everyone looks a little panicky about that idea until Lena chimes in and agrees. 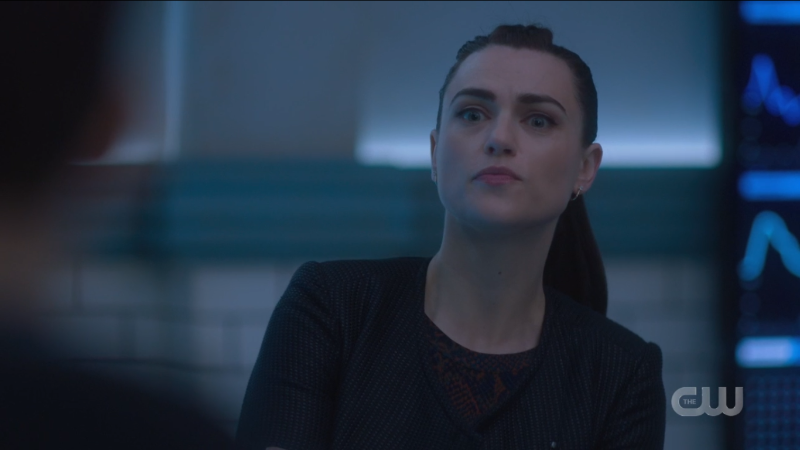 :recognizes a gay in CRISIS when she sees it:

Also, Lena has an idea of how to do just that. So Alex reiterates the orders and the team scatters again. Alex thanks Lena for having her back. It’s nice to have her support, and to not be bossed around by J’onn. 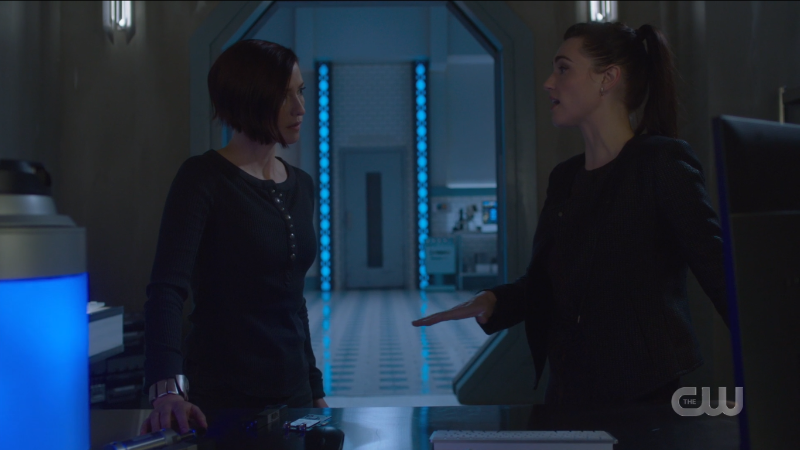 “I just don’t understand how hands can LOOK gay, but they keep saying it!”

Lena tells Alex all the sciencey mumbo jumbo she wants to do with the q-waves and the nanobots and she just needs some of Kara’s DNA. And Alex knows where they can find some. 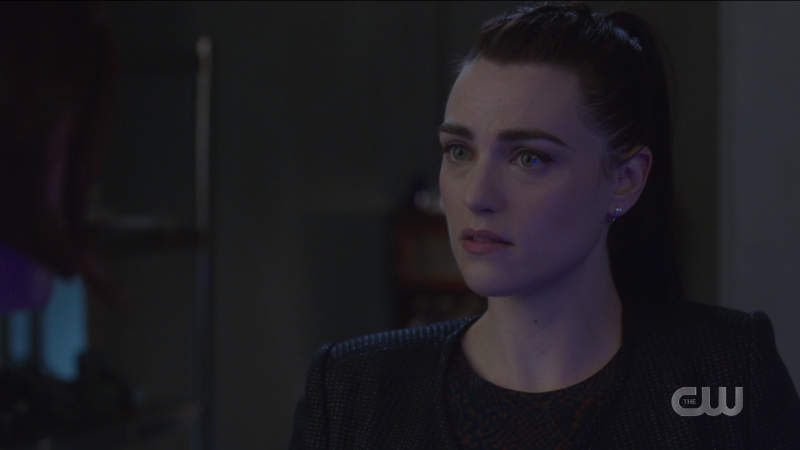 “Where? I already did my laund—oh, uh, what were you going to suggest?”

Brainy and his emotional support donuts go to talk to Nia, who tells him that she saw Midvale again and can’t figure out what it means. He says she’ll figure it out, and she says that she’s just as worried about him. She asks him if the donut marathon he’s in the middle of has anything to do with his newfound excess of feelings and he says he’s fine he just really likes shoving sugar into his metaphorical wounds and is sure this will make him feel better. He’s a genius, just go with it. Prescription donuts. She smiles at him and says she’ll be here when he realizes the donuts are a stopgap not a cure. 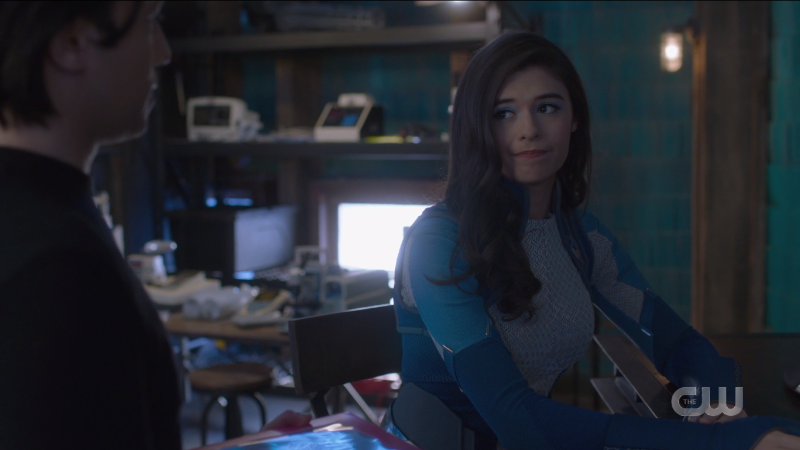 Donuts and Dreamer sure would cheer ME up.

In the Phantom Zone storage rooms, the three lost souls split up, and when Kara runs toward the sound of her dad in distress, she finds him injured and Nyxly being a bit dodgy about what exactly happened. Even more suspicious is that once again Nyxly’s magic doesn’t seem to be working to do exactly what she did once for Kara. Father says to leave him behind, and Nyxly maybe-too-quickly agrees, but Kara thought she lost him once, she’s not losing him that easily now. He begs her to at least go bring the mirror back and get the portal working, begs her in Kryptonian even, so she relents but promises to come back for him.

In the Tower, Alex brings Lena the Legacy Download crystal. She plays it for Lena, specifically the part where Kara talks about how last names and blood don’t make a family, that her friends are her family too. Lena missed Kara’s voice and looks on with wonder as Kara says, “In the end, we always come back together, stronger than ever.” 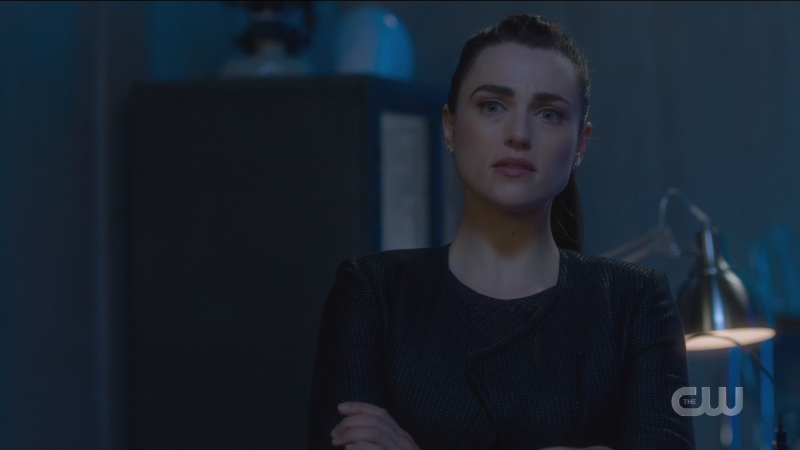 “Do you think her bangs have grown out by now?”

And honestly I don’t care if it’s cheesy, but I love a good found family speech. Gets me right in the feels.

Alex gives Lena the crystal to use for the locator they need to make, since Kara would have had to upload her digital DNA into it, but Lena points out that if she does that, the recording will be gone, and there’s no guarantee it will work. 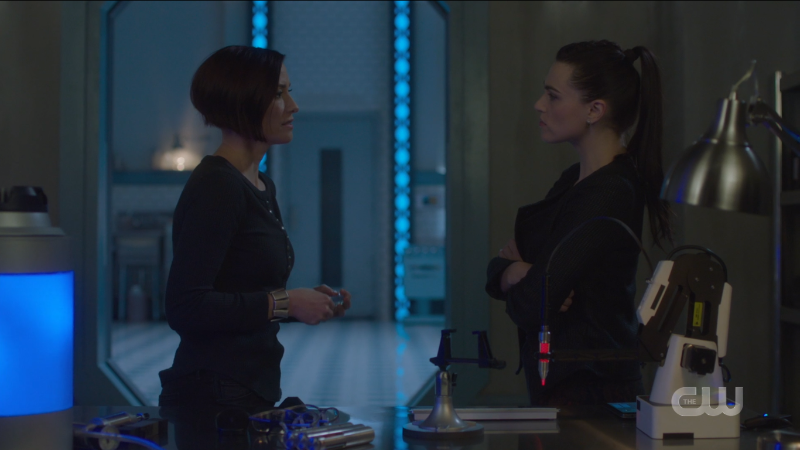 Every time these two made eye contact my heart did a full backflip. Don’t tell Kelly and Kara.

Lena doesn’t want to be the reason Alex loses this actual piece of Kara. But Alex trusts her with her sister’s life, quite literally, and Lena can hardly believe her ears. That’s two whole people that she loves and respects who have said to her face that they trust her. 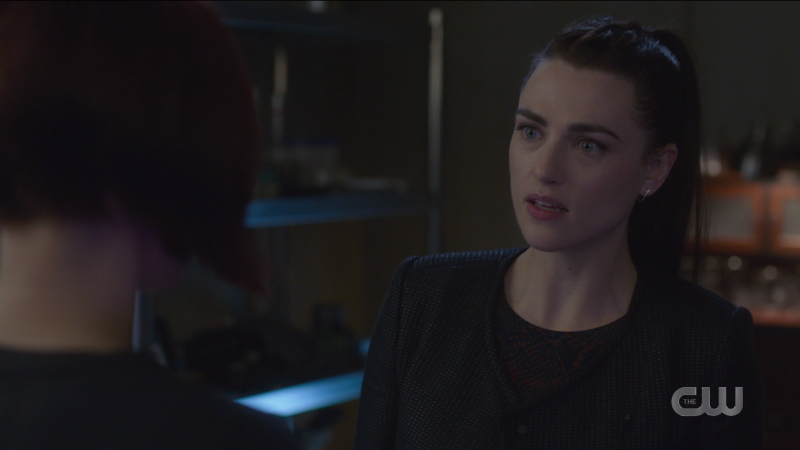 I know I joke a lot about AgentCorp and I do low-key accidentally ship it because I’m a trash panda but I also am genuinely so excited for Lena to have FRIENDS again. As soon as Kara’s back, we NEED a game night.

Lena tells Alex what her plans are and Alex smiles at her like “I’m not leaving you silly” and says she’s staying to help. Lena tells her to “suit up” and gives her some safety goggles and dear GODS they are adorable. 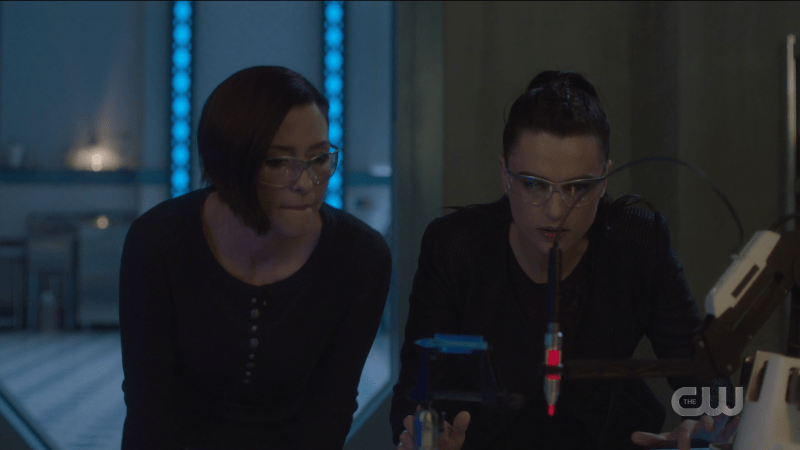 “Obviously you would be Cosima and I would be Delphine.” “Please tell me you’re kidding, Alex. You have that quite backwards.”

And this is all I’ve ever wanted for Lena! She’s a fully integrated, wholly trusted part of the team! She’s such a huge asset and she shares the biggest core value that is a requirement for Team Superfriends: She loves Kara Danvers. Even if in the canon of the show it’s just a best friend kind of love, it’s something she shares with all of them.

M’gann and Nia work together to use M’gann’s residual Phantom knowledge and Nia’s new ability to astral project and after another brief Midvale glitch, Nia sees the chrysalis and notices that they still have some time to find it before it hardens, but not very much. In fact, after she tells Brainy what she saw, he calculates they might have as little as an hour to destroy it.