I first wrote about the new webseries Her Story a few months ago after I had the chance to interview several of the show’s stars and creators. Back then, I said that Her Story was “poised to be one of the most authentic onscreen depictions of trans women ever.” Now that I’ve seen it, I feel confident in saying that it’s not only one of the most authentic onscreen depictions ever, but also one of my favorites.

To quickly sum up Her Story, it’s a webseries of episodes following two trans women, Paige and Violet, who are friends and who each enter into new relationships. We get insights into their lives, their passions, their friendship with each other and their feelings about dating. The series stars Angelica Ross as Paige, Jen Richards as Violet, Laura Zak as Allie and Christian Ochoa as Jake. Richards and Zak also co-wrote the series together.

When I first heard about the show Transparent, I had pretty much no interest in it, I didn’t want to see another portrayal of a trans woman written by a cis woman with the trans woman played by a man. Then, I watched a preview for it and saw Sarah Pfefferman ask her titular trans parent, “So, you’re going to start dressing like a woman?” and Maura responds laughing, “No, no, all my life I’ve been dressing like a man.” That line sold me on the show, because I thought, whoa, I guess they do get it, that’s better than any dialogue about being trans I’ve ever heard in a movie or TV show. This show is like 55 minutes of that line.

Half of my notes were just me writing down something that Paige or Violet said and adding “Jeez, I feel that.” When Violet looks on Craigslist first for “m4t” (men looking for trans) and finds dozens and dozens of fetishizing results and then for “w4t” (women looking for trans) and finds zero results I thought “I’ve been there.” When Violet is asked by a random stranger if she’s trans I thought “I’ve definitely been there,” and then when that same random person asked if she could interview Violet for an article about trans women I thought “been there too.” When Violet asks Paige “do you think me liking a woman makes me less of one?” I remembered how one of the reasons I didn’t come out for so long was that I was afraid that I couldn’t be a trans woman and like girls. When Violet told Allie that she had been “noting how much bigger my hands are and wondering if people have been clocking my voice,” I thought back to all the times I’m been out in public with cis women friends and felt self conscious the whole time. 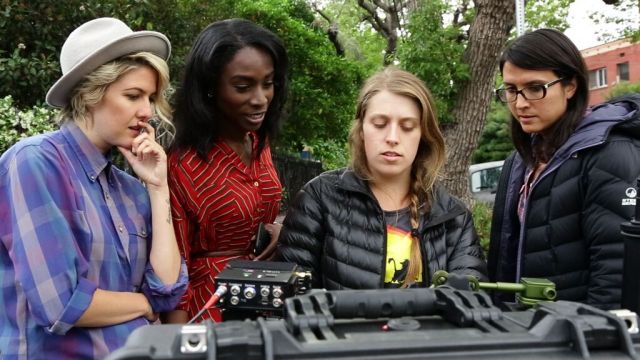 This is one of the best results of the unique place this show is coming from. It’s precisely because the show is written and directed by trans women, starring trans women and featuring trans women on the crew that it’s able to be so authentic and so acutely focused on its trans characters. While watching this show there were two things that I noticed right away, the show is actually about the trans women it says its about and the those trans women seem very much like real trans women. So often I’ll watch a movie or show that’s labeled a “trans movie” and it seems like it’s mostly about the cis people who know the one trans person in the movie. Or the depiction will just ring so false that you wish they hadn’t even had a trans character to begin with. This show does the exact opposite.

Her Story doesn’t hide away from showing that there are definitely members of the cis queer community who aren’t exactly open to the idea of trans women being lesbians. Allie is shown to be a proud member of a circle of queer women friends, she’s active in the LGBTQ community and even writes for a queer newspaper. But she also has a complete lack of trans women in her life until she meets and befriends Violet. She’s shown to be ignorant about how to be friends with trans people and equally ignorant about how serious it is to out a trans woman. But she’s also shown as being willing to learn, and willing to change and willing to grow. The show doesn’t focus on her journey to become a good friend to trans women, though; that’s a side plot in a story that’s clearly about Violet and Paige.

As a queer trans woman, I absolutely loved seeing the relationship between Laura Zak’s character Allie and Jen Richard’s character Violet. It’s so rare that I get to see relationships like this portrayed in media. The two of them have a super adorable, super nerdy dynamic that’s full of chemistry. While I’ve definitely met my share of Lisas (Allie’s cis queer friend who doesn’t consider trans women to be “real” women) while being a part of the queer community, I’ve also made some of the best, deepest, most loving and supportive friendships I’ve ever had.

While I love, love, love Allie and Violet together, I was enraptured by Angelica Ross. Ross played Paige, a lawyer for Lambda Legal who is fighting a case on behalf of a trans woman who was kicked out of a women’s shelter and who meets a new guy named James (played by Christian Ochoa), whom she starts dating. Ross lights up the screen every time she’s on it. Her performance is hilarious, heartfelt and full of some of my favorite lines (and line deliveries) in a long time. 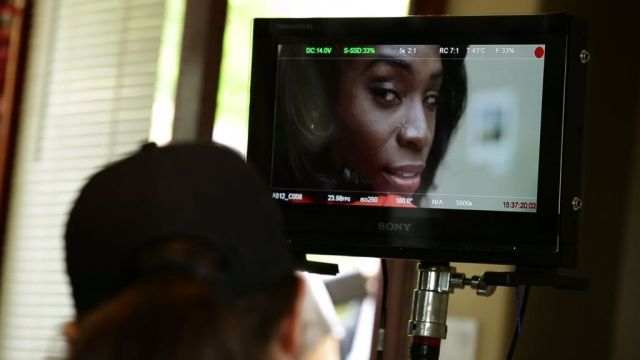 One of the best parts of the series comes when Paige confronts Allie’s transmisogynistic friend Lisa, played by Caroline Whitney Smith. Lisa’s done something that she clearly thinks was standing up for women like herself, but is really putting trans women in danger. The way Lisa sees it, Paige, and other trans women, might identify as women, but they’re “biologically male” and for her, “that is a difference” that matters a whole lot. Lisa represents a pretty big part of the queer women’s community. She’s proud to identify as a queer woman, and she’s proud to fight for those who she considers her sisters, but she also definitely does not consider trans women as belonging in that group.

I loved the specific way that Paige called Lisa out; it wasn’t “if you insult me” or “if you disrespect trans women,” it was “if you do anything to put the lives of trans women at risk” which is exactly what it is in real life. Every time I see someone talk about how transmisogynistic jokes or misgendering or outing trans people isn’t that big of a deal and that trans people should stop being so sensitive, I think about how we’re not being sensitive — we’re literally worried about our safety, and the safety of our sisters. Transmisogyny isn’t just a joke we can brush off. It’s a real thing that really affects the lives and safety of trans women. 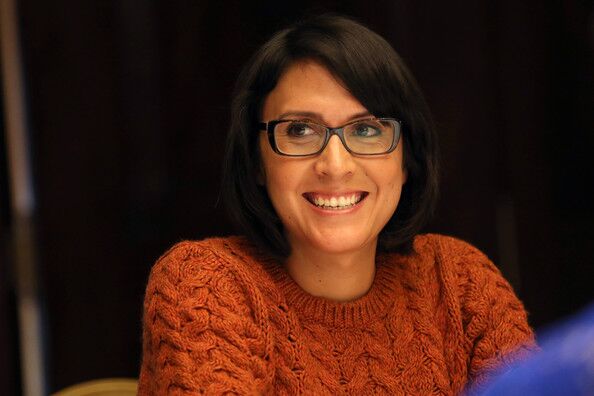 I also want to say that even aside from being a great show about trans women, this is just a great show. It’s beautifully shot (director Sydney Freeland, who also did Drunktown’s Finest, does a wonderful job here; she has a real vision for capturing her characters in the best way), the jokes are funny, the emotions are real, the characters make you root for them and the story and characters move and grow in a very satisfying way. Also, I want to make sure to give a shoutout to the stylists and hair and make up people — I love the style on this show, everyone looks great. Derya Derman, Ginger Diercks, Olivera Markovic and Erica Volltrauer did a great job with the costumes and wardrobe and Jessica Eisenman, Shannon Schotter and Rikki Techner did a great job with the makeup. I was jealous of the way pretty much everyone looked in every scene.

Honestly, my biggest issue with the series was one scene where Allie is sleeping with her face resting on a white pillow and when she wakes up, her eye makeup is perfect and hasn’t smeared on the white pillow ruining it. Girl, tell me what kind of eyeliner you’re using, because that is not how things turn out when I go to bed without washing my face.

In a way, the premise behind Her Story is speculative fiction. It asks what would it look like if we lived in a world where a TV show about trans women not only starred trans actors, but also was written, directed and created by trans women. This isn’t just a new frontier, this is a bright and wonderful one. This is the kind of trans TV show that we’ve been waiting for. I can’t wait to see what Richards, Ross, Zak and Freeland do next. Whatever it is, it’s sure to be great.

There’s this one line where Allie’s talking about how she became the person she is today, and she says that something “made me realize the power of a true story well told.” That’s the perfect summation of this show, a true story well told that is full of power. In showing two trans women who find love — one with a man, one with a woman — Her Story is helping trans women everywhere to feel like we’re going to be able to find love and happiness, and cis people everywhere feel that there’s no shame in and nothing wrong with loving a trans woman. One of the goals of the creators of Her Story is to be able to turn this into a full series and get picked up so that they can continue to make this great show and make it well. I’m hoping and wishing that Hollywood takes note of this series and that happens. Her Story debuted online today and you can stream all the episodes for free on Youtube.