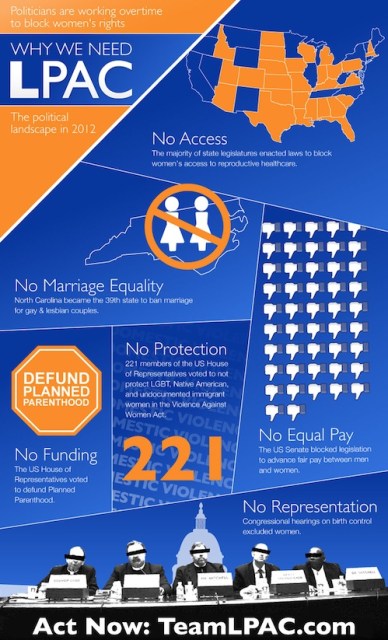 Today, a very specific kind of history was made when the first-ever political action committee was formed by lesbians to serve lesbian interests in the political sphere. Named LPAC, it joins a host of other “super PACs” which will attempt to influence election and legislation outcomes, and support candidates they agree with while opposing those they don’t.

Super PACs are a hot topic this election season, because of a recent series of legal decisions which give them virtually unlimited freedom in collecting donations. The culmination of Citizens United v. Federal Election Commission, SpeechNow.org v. Federal Election Commission, and American Tradition Partnership v. Bullock means that PACs can accept unlimited contributions from corporations, unions, or individuals. This has been highly controversial because it means that if a wealthy  individual or even a company, like a defense contractor, has a vested interest in a certain candidate winning, they can put as much money as they want into supporting that person’s campaign. Granted, they still can’t donate directly to the candidate, and there are limitations on the ways in which super PACs can interact with the candidates they support; they’re not supposed to be able to “coordinate” or plan campaigns together, so everything a PAC does has to be on its own and independent of the campaign they’re supporting.

This series of court decisions has created “super PACs,” which can’t donate directly to the candidates they support nor “coordinate” with them, but can still pour tons of money into resources to help get them elected. For the most part, this system tends to reward those people with the most privilege (and money) with political agency. Which is why it’s fascinating that LPAC has been formed to combat marginalization, and try to give some political agency back to queer women. The LPAC’s goal is to raise at least $1 million for the 2012 election, and use it to support “causes that appeal to lesbian voters.” There are several high-profile lesbian political figures on the board of LPAC, from Sarah Schmidt, a businesswoman and consultant, to Laura Ricketts, co-chair of the DNC’s LGBT Leadership Council and National Leadership Counsel for Lambda Legal, to Urvashi Vaid, former executive editor of the Gay and Lesbian Task Force and Director of the Engaging Tradition Project at the Center for Gender and Sexuality Law at Columbia Law School. Jane Lynch and Billie Jean King have also given public support to the project.

Interestingly, unlike other gay-affiliated political organizations, LPAC doesn’t have the stated goals of electing openly gay officials, and it doesn’t have a specific party affiliation. It’s explicitly declared itself to be bipartisan, and its supporters and members don’t have to be lesbians.

Its criteria for candidates — men or women, gay or straight — are that they support equal rights for LGBT women and their families, and that they also back sexual and reproductive rights for women and access to health care. 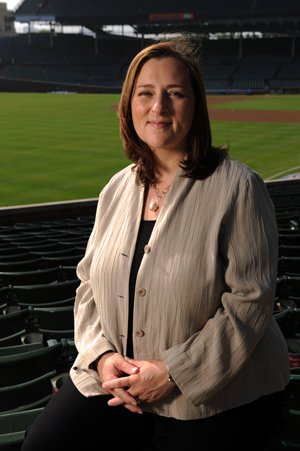 Laura Ricketts is also co-owner of the Cubs, and is currently the only openly gay woman to own an MLB franchise. Her entire family is reputed to be wealthy and politically active, but she seems to be at odds with the rest of her family. Her father, Joe Ricketts, backs his own super PAC which opposes Obama and earlier this year considered putting together an attack campaign against Obama based on his relationship with Jeremiah Wright. Laura, however, is one of Obama’s “bundlers,” or donors of large sums of money. Although she clearly feels a personal investment in Obama as a candidate, it doesn’t appear that the LPAC has pledged any kind of support for him specifically; it seems that the PAC will focus on individual actions of financial support that will further causes of LGBT equality and women’s rights.

So far, LPAC has raised $200,000 of its goal. Since women and lesbians aren’t often the group with the most disposable income, it will be interesting to see how much they’re able to raise. But the truth is that most political power and progress is inextricably connected with money. While so far much of progressive politics seems to have been centered around hoping that the people with money will come to agree with progressive ideas, maybe it’s worth it to try putting the money in the hands of people who are already working for a progressive future.