I don’t really go to the movies very often. It’s expensive and, really, who has the time? The second to last movie that I went to see was Snow White and the Hunstman, which was a terrible mistake. (It would have been a significantly better experience if I could have just put on earmuffs and watched KStew run around the screen with a sword in her hand.) But last week, my friend lured me out of my apartment and away from the free movies on my computer to see Beasts of the Southern Wild, a film that — at the time — I had never heard of. 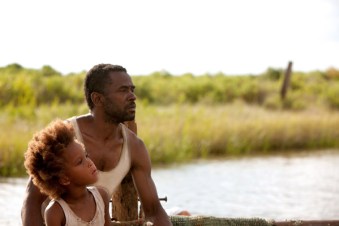 Hushpuppy with her dad

Beast of the Southern Wild is a beautifully shot, apocalyptic fable about a young girl named Hushpuppy who lives with her father in a fictional delta inland off the Gulf coast called The Bathtub. Our original impression of The Bathtub from the opening montage is that it is both rich in culture and counterculture. “The Bathtub has more holidays than the whole rest of the world.” Accordingly, Hushpuppy’s world is vibrant and animated. Hushpuppy herself, a precocious child and narrator of the story, finds joy in listening to the heartbeats of living creatures and learning about the great beasts of the past. At the same time, the people who make up the community of The Bathtub are at obvious odds with the people on the mainland on the other side of the levee, whom they have lived in spite of for years. This relationship to the mainland fuels the firey sense of independence that The Bathtub has adopted in order to survive. This idea is the heartbeat of the entire film.

It soon becomes clear that a storm of apocalyptic proportions is moving in on The Bathtub. The mainland has ordered a mandatory evacuation (although that doesn’t become clear until later), but Hushpuppy’s father — who has heart disease — is adamant about staying put: “I’m your daddy, and it’s my job to take care of you, OK?,” he says as he tries to fix rubber floaties to Hushpuppy’s tiny but strong arms. But the truth is is that he can’t. Hushpuppy knows this. Everybody knows this. But what Hushpuppy’s father has instilled in her are the tools with which to take care of herself. He teaches her how to fish, how to shell a crab, and how to be “the man” and “the king of the bathtub.” There is never any question about whether or not it is appropriate for Hushpuppy — a girl — to learn to be a “beast.” She just does. 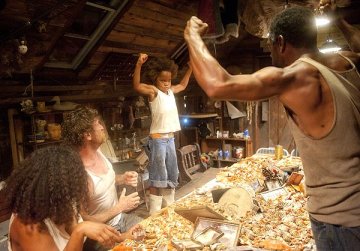 And that’s what makes Beasts so different than any other movie I have ever seen. Unlike Snow White, where I kept hoping to see Snow White save herself, in Beasts taking charge of one’s own salvation isn’t a question. It’s a necessity. And Hushpuppy knows this to be true from day one: “Everybody loses the thing that made them. The brave men stay and watch it happen. They don’t run.” Hushpuppy always knows that she is among them, the “brave men.”

Too often in other movies–especially in movies about women–the main plot-advancing sentiment is something like this: “Is she gonna do it? Is she gonna realize that it’s OK to save herself? Or is she gonna sit around waiting for someone else (a man) to save her?” And while this is better than the alternative, female characters who are sitting around waiting for a man to save them from the opening scene, this is not necessarily interesting, progressive, or feminist. (Which is my definition of a movie worth paying for. Word to the Bechdel test.) Because, honestly, the base assumption in our society is still that women don’t know this about themselves. That they need to be reminded that they are capable of doing shit. Usually by a man.

Beasts makes no such assumption, which is why Beasts of the Southern Wild blows every other movie I have ever seen out of the water and you should really go see it.