After Noman Robin witnessed, along with hundreds of others, the public beating of a transgender woman for using the women’s toilet in a shopping mall, he decided to make Common Gender, a new Bollywood film that’s taking Bangladesh by storm.

It was clear to Robin that there was an important story to be told: like so many queer folks, members of the “hijra” community are among the most marginalized in South Asia. Hijra, a word often mistranslated as “eunich” but which actually encompasses a wide variety of feminine-of-center identities, is often thought of as a “third gender.” Though they are accepted as a facet of society — traditionally they sing at births and weddings — their role doesn’t eclipse the widespread discrimination they face day-to-day.

Take, for example, the story of Mitra, recently detailed by the Global Post. Mitra, a member of the hijra community, has found it hard to escape the social stigma that comes along with her gender identity, even though she is educated and holds a degree in hotel management. “‘I was very happy, because I thought, “No one is going to keep me from getting a job.” But, much to my despair, I found that life was much more difficult.’ Hotel managers refused to give Mitra a job because she was a hijra and she was forced to turn to sex work to pay her bills.” Hers is a common story. In June, members of the hijra community came together at the first Hijra Habba to discuss shared issues, make demands of the Indian government–such as a third option for gender on legal documents–and to raise public awareness of their rights.

Enter Common Gender, a film centering around this marginalized but vocal community. The story follows Sushmita, a hijra who falls for a Hindu boy and suffers rejection by the boy’s parents. It’s a film without any star power and an “art-house” label, according to Enamul Karim, the film’s distributor.

I don’t know about y’all, but I anticipated this movie to go over like a greasy school lunch. I’m not the only one; the film’s distributor decided to contain the release to a mere six cinemas for the premiere two weeks ago. But guess what? The film’s playing to full houses and doing so well that cinema owners are extending its run and screening it nationwide. Karim also adds that an Indian producer has expressed interest in buying the film rights. 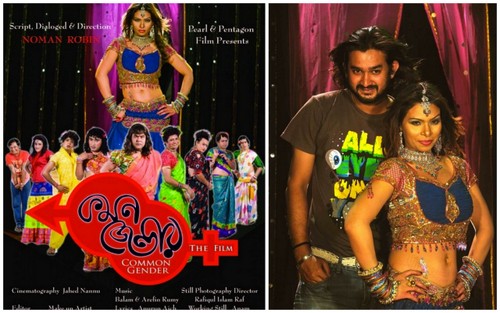 So far there’s no word on an international release, but if you’re in India, keep your eyes open for Robin’s coming-soon-to-a-theater-near-you smash hit. Could all of these events indicate a cultural shift for the hijra communities of India? I can’t wait to find out.