Summer is simultaneously the best and worst time for being outside. Sprinklers! But also sunburn. Beach days! But also mosquito bites and heat stroke. But a picnic is always a good idea. Sit in the shade! Bring a blanket! Cancel all your other plans! See, don’t you feel better just thinking about it? It’s not the first time we’ve suggested you go on a picnic, but hey, it also might not be the last. So grab your best gal and a blanket and also don’t forget some stones to weight down the corners of your blanket, and you’re ready to be made in the shade with some delicious picnic snacks from now til sunset.

Having something to drink isn’t the most important part of a picnic, but it can be the most delicious. Much like this lemonade. 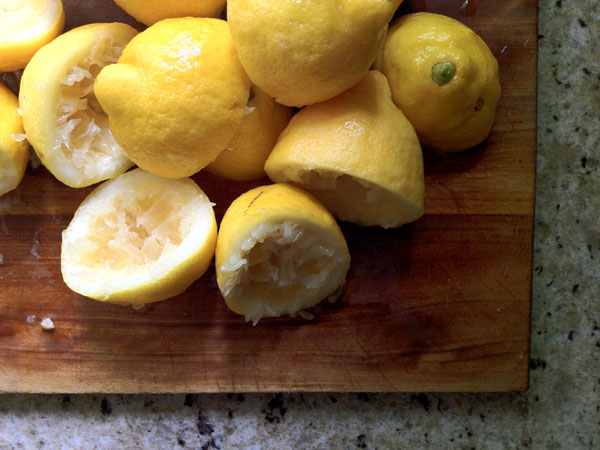 Simple syrup or maple syrup (or one cup of water and one cup of sugar)
2 cups freshly squeezed lemon juice (from eight lemons with a real juicer; from 12+ with a hand juicer and willpower)
5 cups cold water
Handful of fresh mint leaves, whole, washed
Ice
Vodka (to taste)

1. Simple syrup is two parts sugar to one part water and it takes five minutes to make. Boil the water, and slowly add the sugar, stirring constantly. As soon as all of the sugar dissolves, turn off the stove and remove the pot from the heat (if you boil it longer, the syrup will thicken). When the syrup cools, you can put it in a jar and keep it in the fridge for about six months. For clear syrup, use white sugar; for better tasting but darker-coloured syrup, use raw sugar.

2. Juice the lemons. I was using a wooden hand juicer instead of an electric one, so I went through more lemons, but the results were about the same. (If you don’t have any juicer whatsoever, you can use a fork. It will just take a little longer.)

3. Pour the lemon juice into a pitcher or something transportable. Add five cups of water and 1/2 cup of simple syrup (more or less to taste). Stir in the mint leaves and add a few pieces of thinly sliced non-juiced lemon. Stir to mix.

4. Ideally, you would serve this over ice, but at a picnic, that’s not always possible. Nevertheless, fill a glass (plastic cup, water bottle, etc.) with ice. If you want vodka, now’s the time to add it. (If you prefer bourbon, use maple syrup instead of simple syrup, scrap the mint, and add 1 to 2 shots, to taste.) Fill the rest of the glass up with lemonade, garnish with mint if you’re feeling fancy, and serve.

Avocados are basically just the best thing ever, no? This is a super simple yet wholly satisfying sandwich you can make in about ten minutes flat. The recipe calls for half of most of these veggies so maybe just go ahead and make two. Also, you can toss a tomato or some sprouts on the thing if you want and it would probably be pretty dang good. And it’s vegan! 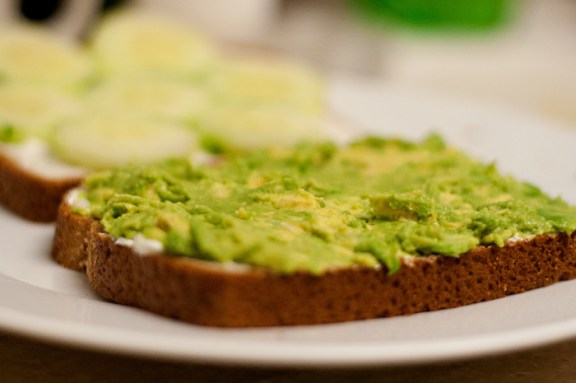 1. Slice all the veggies.

2. Spread hummus on your slices of bread.

3. Add avocado and mash lightly onto bread with a fork.

4. Add cucumber slices, then the onion to taste.

5. Drizzle hot sauce over the veggies.

by Rachel, via Isa Chandra Moskowitz and the Post-Punk Kitchen

Potato salad that’s still creamy and delicious but doesn’t use mayonnaise (or weird fake mayonnaise)? Yes please. Also, if I had to design my perfect-world menu, it would be all avocado everything, so this potato salad is 100% a winner. 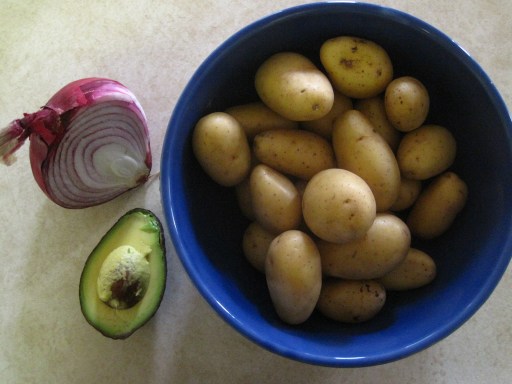 1. Put your potatoes in a pot of water and bring to a boil. Lower it to a… smaller boil? for 15-20 minutes, checking to see if they’re done by looking to see if you can poke a fork into one easily. You don’t want to overcook them, because overcooked potato salad is essentially just mashed potatoes. (I boiled my potatoes in veggie broth as opposed to water because I feel like it makes them more flavorful, but maybe I’m a crazy person!)

2. In the meantime, get out your food processor, and blend together the avocados, lime juice, salt and cayenne until they’re creamy and blended. (The original recipe suggests that you also add the tomatoes and onions but make sure that they don’t get too blended, but that sounds hard, so I just put them in chopped up by hand.)

3. Once your potatoes have cooled, mix them in a bowl with your avocado dressing and chopped tomatoes, onions, and cucumbers. Voila! Taste for salt, but probs you’re done. This will get a little watery if you eat it more than 24 hours later, but for the most part, you’re good! Put it in the fridge for a few hours to chill, and then take it to your picnic and get all up in it. 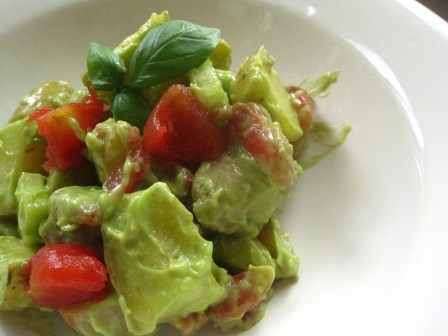 Tabbouleh is basically always tabbouleh no matter what you do to it, which is why I swapped in quinoa. This also keeps for three to four days in the fridge if you store most of the dressing separately, making it excellent for bringing a lunch for non-picnic occasions. 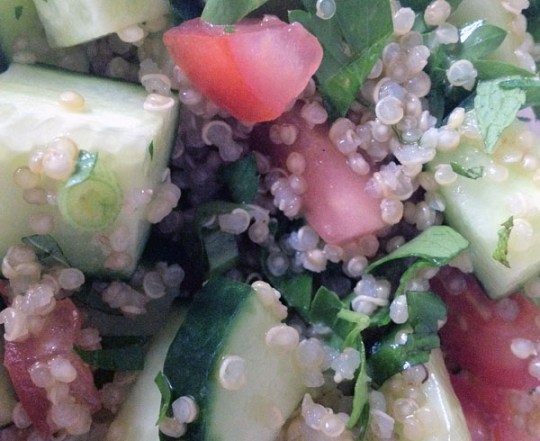 1. Bring 1 1/4 cups of salted water to a boil, add the quinoa, reduce the heat to medium low, cover, and simmer until the quinoa is tender, which will take about 10 minutes. Remove from the heat and let it stand for a few more minutes before fluffing it. Spread it out on a baking sheet to let it cool, or alternatively, forget about it on the counter for a while.

2. In a glass measuring cup or bowl, whisk the oil, lemon juice, and garlic together. Season with salt and pepper.

4. Add the cucumber, tomatoes, parsley, mint, and green onions to the quinoa, and toss. Season with salt and pepper, and drizzle with the rest of the dressing. Serve.

Featured image via Fig and Fauna.