In case you don’t watch it: True Blood is an HBO show during which humans, vampires, fairies, werewolves, and other “supes” (that’s short for supernatural if you’re out of the loop) have sex with each other and also often try to kill/eat each other in Bon Temps, Louisiana.

Initially, the writers of True Blood were fairly responsible about addressing issues of race, gender, and sexuality – basically All The Things that queer and other marginalized peoples care about, which is how I initially got hooked on the V. The vampire plight as the gay plight extended metaphor was well thought-out; the main characters were diverse-ish; and the women were allowed to talk to each other about topics other than men (mostly).

And the show also gave us Tara Thornton, played by the beautiful and talented Rutina Wesley. Tara is the BFF of the main character. Tara is also a woman of color. Popular television shows on networks like HBO are totally whitewashed and it’s consistently super problematic (see: Girls), so I was really hoping that this would change and Tara would be a character written with the respect she deserved – because truly in the beginning she breathed fire into the show. She was unapologetically the smartest person in town, she called white people out on their racist bullshit and she stood up for herself and for her friends. Her character was filled with anger because she had some major things to be angry about, like child abuse, and her anger made her stronger. 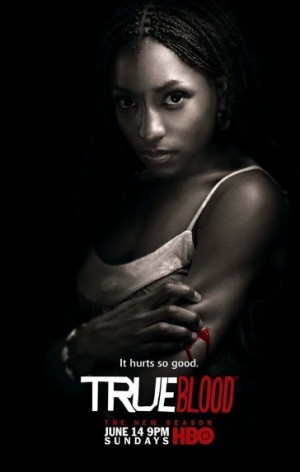 But as the seasons progressed, and we got to know Tara more and more, a disturbing pattern emerged: the more complex her character became, the more she was punished. As her insecurities were revealed one by one, a supernatural creeper would show up to take advantage of her based on whatever weakness had just been revealed.

And most upsetting of all, these various traumatically violent and rapey subplots all involved Tara’s literal enslavement by not one but SEVERAL different supernatural creatures, all of whom are white. If this had happened to her one time amidst a plethora of various other plot lines, it would have been concerning. But the fact that Tara’s enslavement has become the central theme of her subplots throughout all the seasons is horrifying. I am not a woman of color nor am I a rape survivor, so I’m not in any way claiming that I can speak to these experiences with authority. But I do feel confident in saying that True Blood approached a chance to respectfully write a major queer female character in probably the worst way possible.

For example: Tara is kicked out of her house by her alcoholic mother, and so because of her emotional vulnerability and loneliness, she is hypnotically controlled by the evil maenad Maryann. Maryann forces her to do nasty things like eat a human heart pie and build a giant meat statue. While under Maryann’s influence she falls in love with a human named Eggs, who is also controlled by the maenad, and very unfortunately dies. While grieving the loss of Eggs, Tara is kidnapped and held hostage/raped repeatedly by a sociopath vampire named Franklin who wants to make her his forever slave bride. 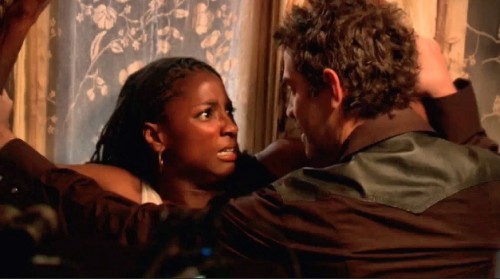 After Tara escapes from Franklin, she’s at her breaking point and leaves Bon Temps. And then the writers give us a teeny tiny gift: they patch up the wounds on her spirit by bringing her back the next season as a lady-who-likes-ladies. A queer lady! No one saw that coming. Tara herself probably didn’t see it coming. But hey, when life hands you lemons, why not start carpet munching? Actually I don’t really think that; I think based on her superior arm structure that she was always destined for lesbianism.

So, it gets better, right? Not yet. Despite being given a super hot cage-fighting girlfriend (symbolism!) and a long-lasting post-orgasmic glow to her face, things only get worse for Tara, and her girlfriend isn’t even on the show for a whole season. Then at the end of the last season, Tara’s girlfriend is killed and Tara actually gets shot in the head while trying to defend Sookie. Oy! 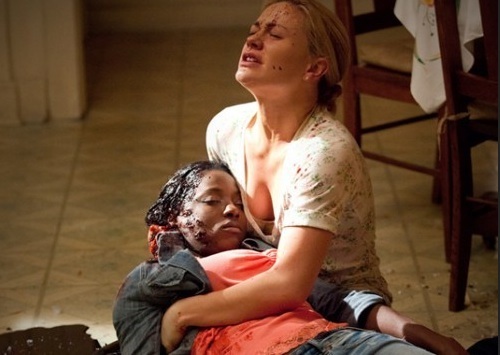 Much like last season’s attempt to heal Tara’s soul wounds by making her a lesbian, this season so far says that the only way for Tara to be a survivor and rise above all she has been a victim of is to make her a VAMPIRE. To the margins of society with ye, O damaged woman! It seems the writers couldn’t conceive of a female character who could survive several seasons worth of enslavement and rape and still be a successful human. So time to try a different form of existence. And time to Other her even further.

Fortunately/unfortunately, depending on your general outlook on life, Tara is turned into a vampire by Pam, who is a) another prominent queer female and b) not a Tara fan – she tried to kill her a few times. So now I think we are supposed to be excited that two main queer ladies are thrown together for a shared storyline, which I guess is nice because usually they are isolated from other sisters in straight-land. But also there’s this thing in the vampire world where the vampire who made you actually owns you and can control you forever until they decide not to. And Pam needs someone to bartend, so. Again, Tara finds herself held hostage by someone who doesn’t have a problem abusing her. 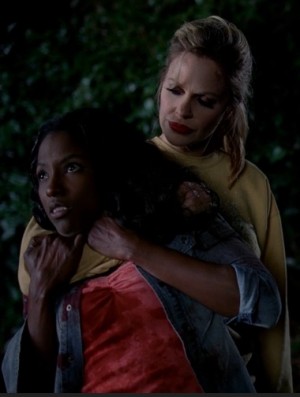 This is all to say that despite this season’s repetitively problematic premise for Tara, I have hope and you should too. And here’s why: True Blood has new blood in the form of a writer named Angela Robinson. You might know her as the writer and director of the cult classic lesbian espionage film D.E.B.S. She also created some episodes of a show some of you may have heard of called The L Word. Do you see where I’m going with this? Robinson is a professional lesbian, and a lesbian of color, at that. Do you trust her with Tara’s fate? I would like to trust her. I’m getting old and I need someone to rely on (sorry, that terrible Keane song is stuck in my head).

She wrote Sunday night’s episode and if you haven’t watched it yet, you should go do so right now and then get back to me. But basically this is the most lesbian-ish episode to date, and there isn’t even any making out. Jessica, another vampire, gives Tara a speech that’s totally an It Gets Better talk only the word “gay” is swapped out for “vampire” and sexual attraction is replaced with, um, hunger for blood. It’s tender and hopeful.

And while Pam is still being super abusive to Tara and controlling her every move, there is a notable shift. Robinson wrote a scene in which Tara is wearing Pam’s black glitter corset, and Pam watches her walk into the bar in slow motion. Pam is noticeably aroused by the sight. In this behind-the-scenes video, Robinson says that it’s intentional:

“Tara, at the end of the last episode, has just fed on a human. And then Tara borrows some of Pam’s clothes… I scripted it in slow-mo because I really wanted Pam to see her vampire that she made, and being kind of hot for Tara for the first time, like seeing her with whole new eyes.”

So for the first time, Tara gets to feed on someone, rather than the other way around (literally and abstractly). Even though Pam is standing over her shoulder telling her how to do it, Tara is in charge of this human’s life. And that feeling of complete control over someone else’s life force gives her new power and confidence – even though she’s technically enslaved. Drinking someone’s blood on this show, as long as they are consenting, is erotic. And so the power that Tara gains from the experience is a power that all of the other females on the show have already been given regardless of species. I’m talking about sexual power.

Sure, Tara has had sex and crushes throughout the course of the show, but she has never really been in control of the situations. Meanwhile, everyone in the American South wants a piece of Sookie Stackhouse no matter what that damn girl does, says or looks like. And all the other women pretty much get what they want from the men around them by batting an eyelash or two (except Marnie the witch, but that’s another story for another time). But Tara? Tara has unrequited love and resents people who are attracted to her. She’s been depicted as a sex object to be owned and abused, but now she is starting to be depicted as someone who has the ability to use sex as a currency to attain power. 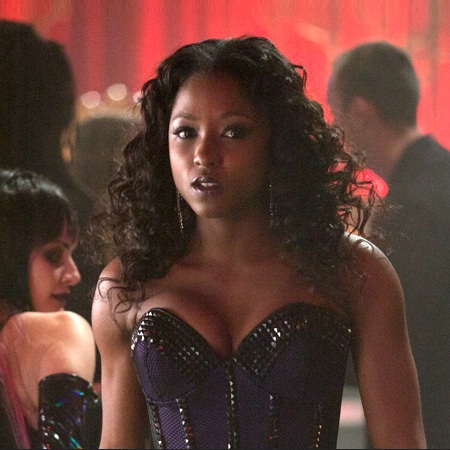 Rarely on a show that’s not specifically for queers do we get to see an actual lesbian woman using her sexual power over other lesbian women. I predict that now that Pam’s got the tingle for Tara, things will start looking up. But if sexual power is going to be the road to Tara’s liberation, is that problematic? Or should she use what she has to get what she wants, just like literally everyone else on this show does?

This begs the question whether or not it is “right” and/or implicative of privilege for a normatively attractive girl to use her sexual power to get ahead in life. I’m pretty sure this is something that has plagued feminists for basically all of time. And it’s especially complicated when you throw in queerness, race and vampires.

I am hoping above all other hopes that True Blood gets this situation under control. Now that she’s a lesbian and a vampire, it’s not like there are many more things she can come back as if this season once again wears her into the ground. Angela Robinson, will you liberate Tara from the cycle of enslavement that others have forced her into? And will you do so in a way where all the things – queerness, femaleness, race, a history of sexual abuse, vampires – are respected? Say yes. We need this.