Greetings shining stars! This week shall forever go down as the week Autostraddle raised $40,000 in 21 hours. Do you have any idea how amazing  you are?! You deserve all the kittens, all the gifs and all the drinks! The fundraiser still has 44 more days to go too, so if you haven’t given yet or are willing to spare some more change, please do so! The more dollars you donate, the more amazing Autostraddle will be and the more likely you’ll get see a Tinkerbell tattoo on Alex’s ass! So pretty much everyone wins.

And show of hands, who’s excited about the Olympics? Tonight I’ll be watching the opening ceremonies with my friend Goldschlager while my digital antenna cuts out every time a car drives by my apartment. I’ll mostly be looking for the 20 out Olympians competing in the Games (I mean Jessica Landstrom and Megan Rapinoe, you guys). And did you see our open thread of the U.S. women’s soccer match against France?

Also this week, Lizz was back at it recapping Pretty Little Liars 306 and Riese brought us episode 302 of our collective nightmare, TRLW. If TRLW dramatics aren’t enough for you, maybe you should check out the soapy Kentucky-based webseries Girl/Girl. Or better yet, episode 3 of Words With Girls.

Carmen posted an adorable Get Baked DC Brunch Diary and Stef gave us advice for dealing with too many mangos.* Sarah told us to read “No Straight Lines: Four Decades of Queer Comics” and then Crystal doled out ten more lesbian romance novels that belong on your bookshelf or Kindle. Malaika explained why she loves Rick Mercer but loathes Stephen Harper and Ash told us more about her ComicCon adventure. Katrina reminded us who run the world (spoiler alert: Brown Grrrlz). Oh, and have you heard of THEESatisfaction? You should probably also listen to our Heatpocalypse playlist.

Vanessa urged you to Add Your Queer Voice to the Sketchbook Project and Rose schooled us in the history of female composers. Speaking of incredible female history-makers, Sally Ride passed away and we learned that she was one of our own. We even made a tribute playlist about it.

Eddie Griffin harassed a lesbian during a performance and you probably heard about the terrifying attack against a lesbian in Nebraska. Then Congress banned future gay marriages on military property because they don’t like us to win a thing and Michele Bachmann said more ludicrous things because that’s her thing. Oh, and some homophobes are concerned that a lesbian judge ruling on homosexual issues in Illinois is biased because apparently it’s only fair for heteros to rule on our rights.

Need a moment to process all that? We understand. When you come back you should maybe check out some tips for fighting stress and remember that Riese and o.b. love you and want to you be healthy and happy. Feel a little better? Okay now go watch Jessica Clark get naked on True Blood and our buddy Hannah Hart at a panel at the Rooster Teeth Expo. The Courage Award Ceremony is pretty inspiring too and so are these numbers showing how great gay weddings are for the economy.

On We Need Help: Our Big Fundraiser to Build A Better Autostraddle:

The Is Someone Chopping Onions? Award to Cassandra: “Saving Autostraddle Part II. I like this because you’ve saved me at least twice. I think we should do a fistbump of repaying debts.”

The Make It Rain Award to Ariel: “Have to go back and actually read this article/watch the video as I saw the word fundraiser and immediately started throwing my money at the screen.”

The Priorities Award to Dizzy: “Today both my ex and Autostraddle asked me for money. Guess which one of these I will be giving to? :)”

On 20 Out Gay Olympians:

The Because Fashion Award to Sawyer: “The UK has a guy in a top hat on a horse. You know what would be even more awesome? Putting the top hat on the horse.”

On Real L Word 302 Recap: A Leap of Faith Into A Puddle of Nonsense:

The Let’s Make A Stew Award to tct: 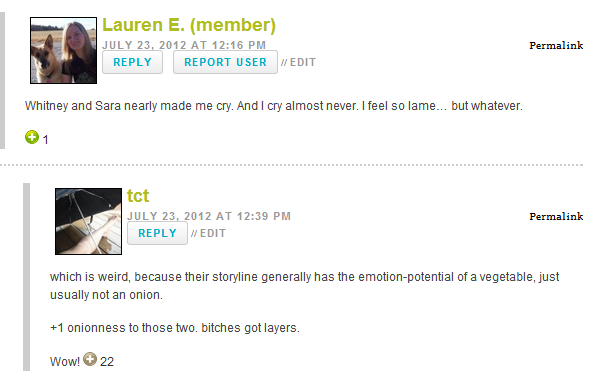 The We Need A Support Group Award to anwa: 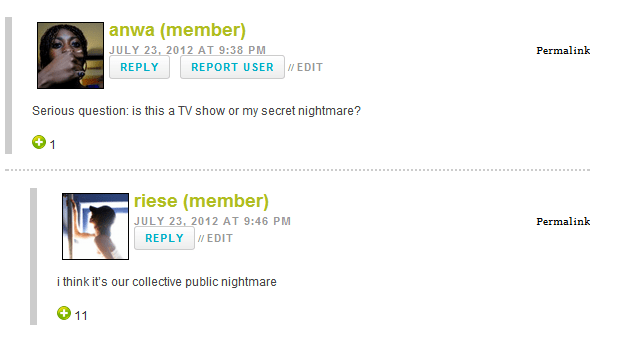 The This Is Our Only Hope Award to Fulton: “I think the best explanation for the recurring intersections is that IFC actually intended TRLW to be a modernized WeHo lesbian interpretation of “Rosencrantz and Guildenstern Are Dead” following that play’s focus on the various doings of the idiot minor characters while Hamlet/Autostraddle goes on around them. And Gary Oldman could totally be Whitney with the dreadlocks.”

On You Have Too Many Mangos:

The Alice Is Our Spirit Animal Award to wasteunit: “Oh Alice, spreading joy and mangoes and legs all over the land!”

On Why Queer Kittens Need A Better Autostraddle:

The Tag Team Award to everyone on this punderful thread: 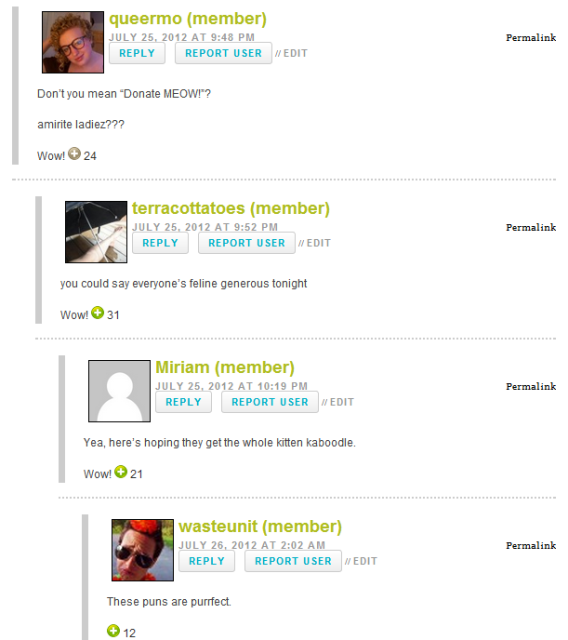 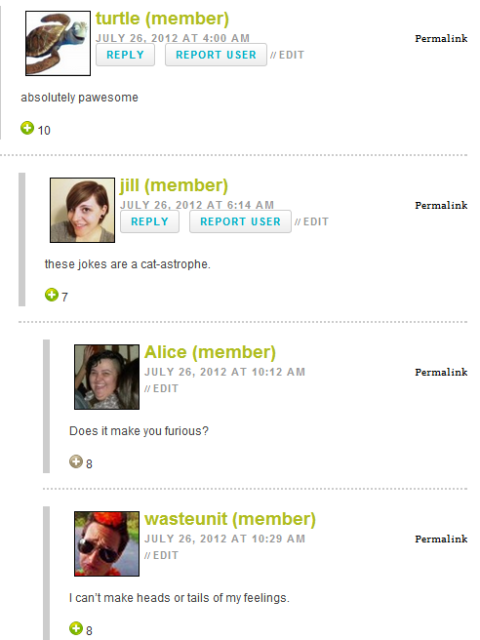 *There is no such thing as too many mangos (or too many comment awards).