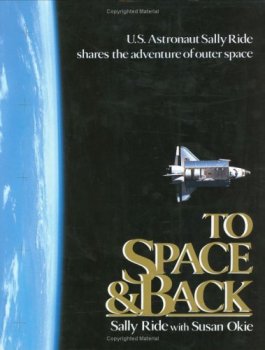 The book was called To Space And Back. It was big, with glossy photographs taken by real astronauts in outer space, and diagrams that showed what the inside of a space shuttle looked like. Where did I get it? Maybe it was a present, or something I picked out at a museum gift shop. We went to a lot of museums in the 80’s.

The book was by Sally Ride, the first American woman to travel into outer space. I loved the hell out of that book because it was a story about a woman doing a thing people said women couldn’t do, and I wanted to be a woman like that some day. A woman like Sally Ride, like Amelia Earhart, like Joan of Arc. I’d never been good at science, or even all that interested in it, but because of Sally Ride I became interested in outer space and started begging my parents to send me to Space Camp (they never did). I had this idea, because I was a child and a therefore fundamentally ridiculous human being, that if I was an astronaut, I would get to fly rocket ships with Sally Ride herself. Have I mentioned that I became obsessed with Sally Ride? I was obsessed with Sally Ride. Sometimes her hair looked like my Mom’s hair, which made her easier to draw. I drew a lot of pictures of Sally Ride.

As a little tomboy in the 1980’s, when I thought about what I wanted to do with my life I never imagined I’d be doing something that involved a lot of other women (unless I succeeded in inventing my Women’s Professional Baseball League). There weren’t a lot of models for that kind of life. Instead I imagined a life like Sally Ride’s — being the only woman in every photograph, on every team, in every meeting. I was already used to that kind of thing because I was always doing activities that somehow landed me as the only girl in so many little rooms. Sally Ride was my hero, of sorts, and I was confident that she’d like me a lot when we met, which, of course, never happened. I mean, I’m genuinely terrible at science. 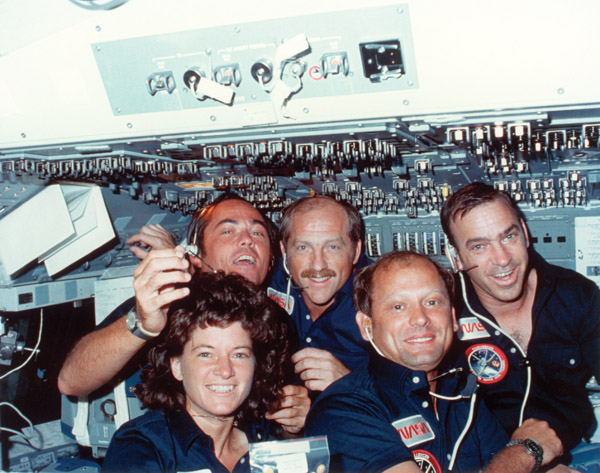 Today, following a 17-month battle with pancreatic cancer, Sally Ride died at the age of 61.

“What’s it like to be in space?” “Is it scary?” “Is it cold?” “Do you have trouble sleeping?” These are questions that everyone asks astronauts who have been in space. The experience is hard to describe. The words and pictures in this book will help you imagine what it’s like to blast off in a rocket and float effortlessly in midair while circling hundreds of miles above the earth.”

– From the introduction to “To Space and Back,” by Sally Ride with journalist Susan Okie. 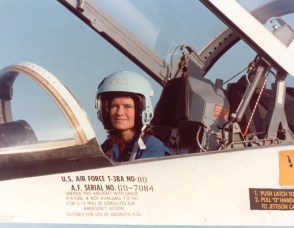 Sally Ride was pretty special from the get-go — bright, curious, ambitious. Born in Encino, California, in 1951, as a teenager she earned a scholarship to the prestigious Westlake School for Girls in Los Angeles and then went on to get a B.A. (English & Physics), master’s degree (physics) and Ph.D. (physics) from Stanford University. As a young woman she was also a prolific tennis player who idolized Billie Jean King. She actually met her partner of 27 years, Tam O’Shaughnessy, playing tennis when both girls were 12.

In 1978 she joined NASA, one of six women and 35 people total chosen from the over 8,000 applicants who responded to a newspaper ad seeking new people for the space program. She completed four years of Astronaut training before June 18th, 1983, when aboard the Space Shuttle Challenger, she became the first American woman in space. She flew again on The Challenger in 1984.

In 1986, teacher Christa McAuliffe, meant to be the first female teacher in space, was one of seven crew members who died when the Space Shuttle Challenger exploded 73 seconds into its flight. The space program was put on a 32-month hiatus and Sally Ride was chosen to head the operations subcommittee of the presidential commission investigating the accident. Neil Armstrong was Vice Chairman of the commission, called the Rogers Commission after its Chairman William P.Rogers. After the investigation, Ride moved to NASA headquarters in D.C. to lead their first strategic planning effort and found their Office of Exploration.

She retired from NASA in 1987 and quickly began making her mark on land; working at the Stanford University Center for International Security and Arms Control, teaching physics at UC-San Diego and serving as director of the California Space Institute. 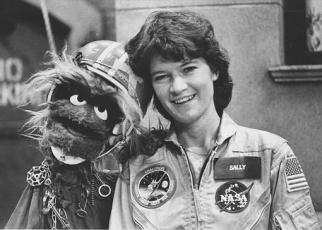 sally ride on the muppets

In 2001, she founded Sally Ride Science, a company that aims to “make a difference in girls’ lives, and in society’s perceptions of their roles in technical fields,” creating innovative science education programs and products “that educate, entertain, engage and inspire.” The Sally Ride Science Camp offers “hands-on” science camps for middle-school-aged girls at Universities in California and Massachusetts. In 2009 she partnered with ExxonMobil to create the Sally Ride Science Academy and became the Education and Public Outreach lead for NASA’s GRAIL MoonKam, which enables kids all over the country to solicit and study photographs taken from satellites orbiting the Moon.

Ride devoted much of her adult life to being an advocate for women in science, speaking about how to nurture girls’ interest in science and scientific careers and developing programs to foster these tiny trailblazers into becoming strong ambitious women like Sally Ride. Can you even imagine how many girls she’s inspired, now? What a life.

Although Sally Ride married another astronaut, Steven Hawley, in 1982, they divorced in 1987. She spent the last 27 years in a relationship with Tam O’Shaughnessy. Tam is the Chief Operating Officer and vice president of Sally Ride Science.

In a 2006 interview for the Academy of Achievement, Sally Ride was asked what it was like to be up there in space, or what she saw when she had time just to look. This was her answer:

The view of earth is absolutely spectacular. And the feeling of looking back and seeing your planet as a planet is just an amazing feeling. It’s a totally different perspective, and it makes you appreciate, actually, how fragile our existence is. You can look at earth’s horizon and see this really, really thin royal blue line right along the horizon, and at first you don’t really quite internalize what that is, and then you realize that it’s earth’s atmosphere, and that that’s all there is of it, and it’s about as thick as the fuzz on a tennis ball, and it’s everything that separates us from the vacuum of space.