For many people, Sally Ride’s death at the age of 61 yesterday was the first time they found out she was in a relationship with a woman, although Sally Ride and Tam O’Shaughnessy had been together for 27 years. A Sally Ride Science spokeswoman has confirmed that while Ride was married to a man, Steven Hawley, for five years, Ride did in fact identify as gay. Furthermore, if Ride had been with O’Shaughnessy for 27 years at the time of her death, their relationship dates back to while Ride was still married to Hawley. But while O’Shaughnessy was the chief operating officer and executive vice president of Sally Ride Science, and the couple co-authored a number of books together, most of America is only now finding out that one of America’s most famous women and feminist icons was gay.

Ride’s sister, Bear (who also identifies as gay), chalks it up to her sister’s sense of privacy (although not a desire to stay closeted), pointing out that many people in Sally Ride’s life didn’t even know she was dying of pancreatic cancer. Bear says that “Sally didn’t use labels. Sally had a very fundamental sense of privacy…” A spokeswoman from Sally Ride Science has confirmed that “there had not, to her knowledge, previously been published acknowledgment of Ride and O’Shaughnessy’s relationship.” Bear says that her sister “never hid her relationship,” but also notes earnestly that “Sally’s very close friends, of course, knew,” although the fact that only a few close friends knew after a full 27 years makes Sally and Tam seem even more private. 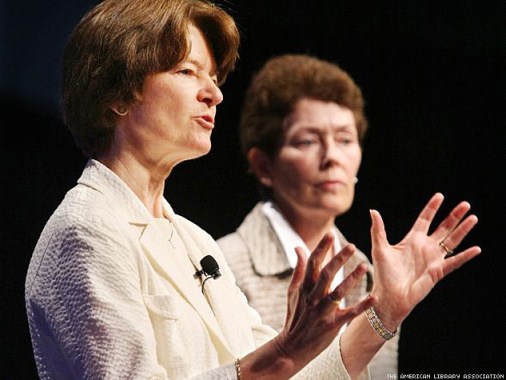 sally and tam, via the american library association

Ride’s romantic relationship with O’Shaughnessy began in 1985, when being an out public figure was much harder to conceive of than it is today. It seems as though while not necessarily remaining intentionally closeted, Ride may have taken the route that many public figures have for decades, and chosen to conduct her personal relationships outside of the eye of the public, without disclosing anything about her sexual orientation at all. But even if the only factor influencing Ride’s decision was a desire to maintain privacy, given that it was 1985 and given how hard Ride had to work to become the hero that she was to so many, one has to wonder: was being out even really an option for her?

In its profile of Ride, The Advocate notes that if Ride had been out when she was becoming a NASA astronaut in 1977, it’s very unlikely she would ever have made it to space, “as the government believed gays represented security risks thanks to potential blackmail situations.” And while most of Ride’s public career has been in supporting young people in pursuing interests in the sciences, our culture isn’t particularly kind to out gay people who want to work with children. And while thousands of young girls wanted (and still want) to be the next Sally Ride, little girls aren’t encouraged to want to be like lesbians when they grow up, even if that lesbian broke barriers for women and worked her whole life to make the sciences more accessible to women. Human Rights Campaign president Chad Griffin said that “it’s a shame that Americans were not able to experience this aspect of Sally while alive.” But did Sally Ride really have the option to share this aspect of herself while she was alive and still accomplish what she wanted to?

The Atlantic has wondered whether Sally Ride’s will be one of the last “coming out obituaries;” if we are finally moving past the point in our history where famous people are “only revealed to be gay at the end of a long life, or after death.” It seems fair to say that if Sally Ride had been born in 1981 instead of 1951, she would have had more choices about how to live her life as fully and openly as possible. But it’s also hard to argue that choices for women are now unlimited, or that two little girls who play tennis together today at 12 will be able to fall in love as grownups without worrying that it will impact their ability to become pioneers, or role models, or everything else they want to be. After all, because of DOMA, even coming out doesn’t mean that Tam O’Shaughnessy will receive legal recognition as Ride’s partner or wife; she’s not entitled to any federal benefits, despite standing by a genuine American hero for 17 months of battling cancer. 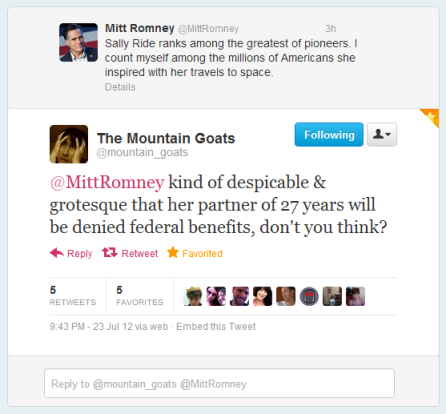 Sally Ride used her life to campaign for women and girls to have access to every kind of success, even in math and science, not to champion LGBT rights. But if looking back at the story of her life as that of a gay woman can highlight the challenges that queer people face, and if the knowledge that the woman who stood by her for 27 years is now left in the cold by the government that Ride served can help people understand the challenges that continue to keep us from living equal lives, then Sally Ride is a champion for LGBT people after all.