Two weeks ago I received an invite to the annual International Gay and Lesbian Human Rights Commission’s Celebration of Courage award ceremony and immediately agreed to go. Shortly after, I began to ponder the awkwardness that might follow in attending a fancy gala where I knew no one in real life other than Charlotte Bunch and would likely be milling about with queer famous writers/politicians/professors of note.  There we’d be,  just me and my glass of champagne. Seeing as this is not the Real (or fake) L word, this is not as sexy a scenario as one might think, but moderate social anxiety aside – onward and upward!

The evening recognized two lesbians for their outstanding work for human rights, Congresswoman Tammy Baldwin and Chilean Judge Karen Atala who received the Felipa De Souza Award. As you may recall, Tammy Baldwin is on track to become the first openly gay non-incumbent elected Senator in the United States, and has fought vigorously for women’s rights supporting the Ledbetter Fair Pay Act and defending the Violence against Women Act (VAWA), aggressively striking back against the War on Women, all while representing the less than lefty state of Wisconsin.  As coverage of the event by the Advocate explains, Baldwin also established the LGBT Equality Caucus in 2008, co-chaired by Barney Frank, which has now grown to over 100 members. 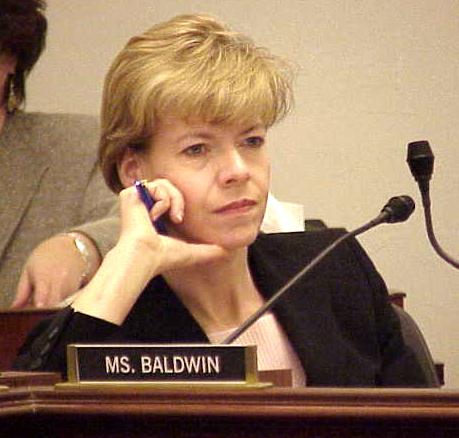 Tammy Baldwin is a candidate in Wisconsin for Senate this year

Hosting the event was Maulik Pancholy who you probably know from his roles in 30 Rock and Weeds and probably don’t from Whitney.   Presenting the awards were recently married powerhouse NY City Council woman Christine C. Quinn and Professor Suzanne B. Goldberg of Columbia Law School. So many lesbians in  power suits, so little time.

IGLHRC’s acting executive director Jessica Lynn Stern also addressed the crowd, opening with a statement about her coupled status and confirmation that no, she is not a swinger so sorry ladies! Stein continued,

In lofty terms, we at IGLHRC would say that our mission is to end human rights violations based on sexual orientation or gender identity, but in daily terms, we promote something much simpler: story telling. After 22 years of experience advancing LGBT rights worldwide, our breaking news for you tonight is that the oldest tool in the books is the best one. The most powerful tool for social chance is our own voice, telling our own story.

Most moving for me was the story told by Judge Karen Atala of her experiences defending her right to mother her three daughters as a lesbian in Chile. Her actions defending her rights as a mother and lesbian led to a landmark ruling at the Inter American Court awarding her monetary compensation of $50,000 plus $12,000 in court fees for the years spent defending her human rights. 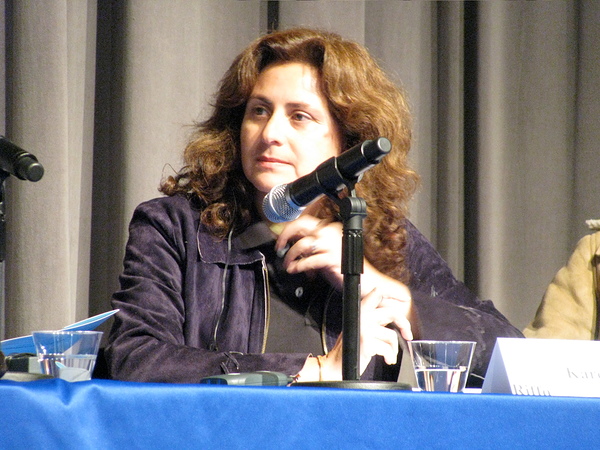 Atala read her incredibly moving speech in Spanish while an overhead prompter translated:

I’m a Chilean woman, of Palestinian origin, a lawyer by profession, a judge by trade, a mother and a lesbian. These are some of the characteristics that define me and only one of them was enough for the Excellency Supreme Court of my country to deprive me of custody of my daughters in a 2004 ruling. They determined that my female partner and I constituted an exceptional family model, one that does not have value in the Chilean society.  According to the ruling, only traditional, heterosexual families have value, and because our family is different, they ruled that my daughters would be exposed to stigmatization and be outcast by society.

In my position as a judge, I never doubted the institution, the empire of Law and its technical character. It also never crossed my mind to lie about my lesbian relationship, to disguise it as a “friendship”. The truth prevails before everything that is the measure that guides my work, that’s why I didn’t deny my sexual orientation during the custody hearings. However, that truth was not politically current in those days.

Also in attendance was the outspoken Ugandan LGBT activist Val Kalende, who helped found the LGBT organization Freedom and Roam Uganda (FARUG). Her activism was documented in a short video showcasing the work of some human rights defenders who have worked in collaboration with IGLHRC and has been widely documented. 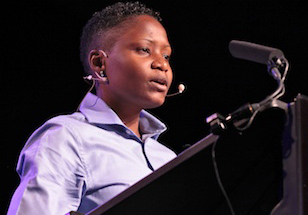 To learn more about the different types of work IGLHRC is involved with across the globe, find out what projects the organization is involved with by country. You can also watch the gala streaming online and see event photos.

sign up for our newsletter
Related:Daily Fixgay rightshuman rightsinternational news