The opening ceremonies aren’t for two more days, but women’s soccer starts today! Have you looked at naked pictures of Abby Wambach recently? When was the last time you celebrated the fact that Megan Rapinoe is an out lesbian? Women’s soccer! I’m excited. 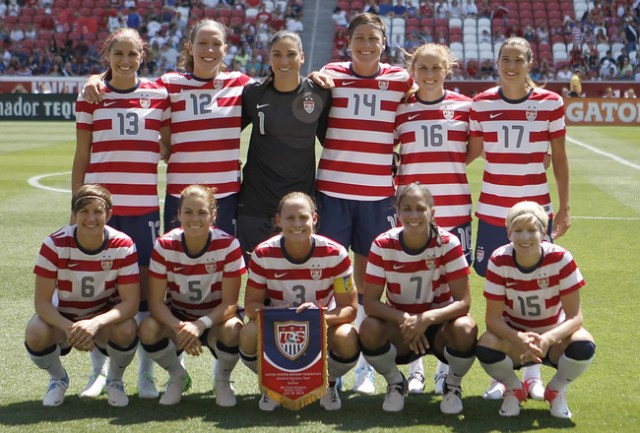 all in our places with bright shiny faces

The U.S. team begins their Olympic journey against France today 25 at 12 p.m. ET, and the game will be broadcast on NBC Sports, thank the baby Jesus. The U.S. women are in Group G along with France, Colombia and Korea DPR, which, to be honest, shouldn’t be too terribly challenging after today. After group play finishes on July 31, the team that wins the group will advance to the quarterfinals. The schedule is outlined here, BUT LET’S NOT GET AHEAD OF OURSELVES. Today, the teams are playing in Glasgow, 400 miles away from London and at the heart of all of my secret “Lip Service” fantasies.

The U.S. needs to do well in this tournament for a lot of reasons, primarily to redeem themselves for their bummer of a second-place finish at last year’s FIFA Women’s World Cup and to help establish a fanbase for a new, solid women’s professional league. This is a really important tournament, and we will all collectively cry and go back to watching “The Real L Word” if they lose. The team looks sharp, but it won’t be an easy road, especially not today. The LA Times reports:

One of those teams is France, which has won 17 consecutive matches since losing the third-place game at last summer’s World Cup. The French have outscored their opponents, 61-4, over that span and shut out their last seven foes, including a 2-0 win over World Cup champion Japan six days ago.

In order to fully prepare yourself for the game, I strongly recommend watching / marathoning this video, which has so many gif-worthy moments that I can’t even narrow it down to my top ten favorites. I will say this: Learning that Amy LePeilbet can’t dance was a what-if-God-were-one-of-us moment for me.

All right, let’s get this party started and talk about the game! The Canadian women are also playing Japan at the same time, so maybe we can talk about that, too!