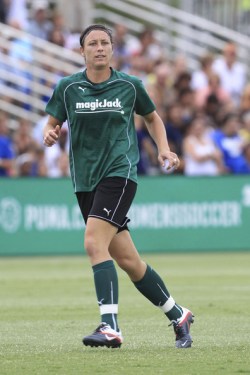 Abby Wambach and the Order of Terrible Team Names

Do you want the good news first or the bad news first? Ok, the good news is that the US Women’s National Soccer Team won the CONCACAF Olympic qualifying tournament and will be heading to the London Olympics this summer! They beat Costa Rica 3-0 and Canada 4-0! They played really well!

The bad news is that the team came home to a legal nightmare and a canceled Women’s Professional Soccer season.

ESPN has a full timeline of the events, but the short version is this: The WPS, American’s premiere women’s soccer league, was struggling financially. The Washington Freedom team was saved from certain doom by Dan Borislow, who bought the team, moved them to Florida and promptly renamed them “magicJack” after a product he invented. During the season, he violated tons of league ordinances and made a lot of players and league officials angry. The heads of the WPS voted to terminate him in the middle of the season. The franchise was disbanded after the season, leaving Wambach, Hope Solo, Megan Rapinoe, Christie Rampone, and the rest of the magicJacks team-less. Borislow is now carrying out a class action lawsuit against the WPS for violating their own bylaws, saying that the WPS tried to oust him immediately rather than wait for the end of the season. On Monday, the WPS announced that they were suspending the entire 2012 season because of money problems. 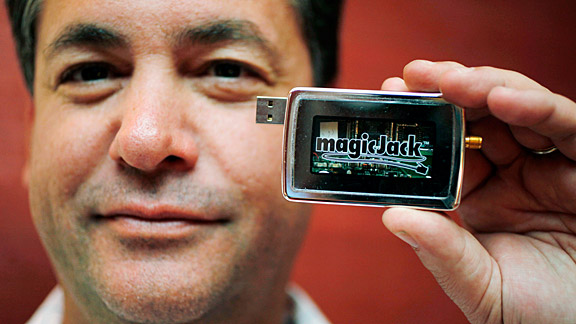 To give you an idea of some of his violations, after only one home game, Borislow was cited for “failure to display sponsor sign boards, failure to upload video to the league’s site for scouting purposes, lack of an ambulance and EMS staff at the game, failure of the coaching staff to wear required Puma attire, an undersized field (league minimum is 66 yards wide), lack of seating for a minimum of 5,000 fans, lack of press accommodations, lack of player availability to the media, and a past-due balance of $53,166.67 owed to the league.” He spent most of the rest of the season suspended.

Until recently, the nature of the players’ grievances against Borislow were unclear. A few days ago, however, forward Ella Masar posted on her blog about some very specific things that happened to the team under Borislow’s rule, including refusing to pay for a surgery she needed and a very unsettling request for players to call him “Daddy.” She also accuses him of blackmailing them into silence by threatening to cut the team if any of the players did not support him. So far, no one has refuted Masar’s claims.

Even so, it’s possible that there is more to the story than what we’re seeing. Abby Wambach, who was magicJack’s player-coach, is fully supporting Borislow. In an interview during Kansas City’s Women’s Sports Award Celebration, Wambach said:

“I’ve always been a proponent of Dan because he and [Western New York Flash owner] Joe Sahlen stepped in at a time when we needed them. People are quick to point fingers and blame. Dan is considered the villain in this, with all the media attention it’s gotten. The truth is that the responsibility is all of ours. Nothing rises or fails with one person. We all need to step back, look at ourselves, and take responsibility for all of the things. Nobody is talking about the amazing things Dan did and how he treated his players. Everybody focuses all the attention on the negative. And that’s not how we’re going to get the WPS back and running. You can’t build something great on negativity. It has to be in a positive manner.”

Also, you should watch the commercial for magicJack (the product) that she made when she was on magicJack (the team), because it’s hilarious and awkward and relevant.

Women’s Professional Soccer CEO Jennifer O’Sullivan, who became CEO in late September, is hopeful that the WPS will recover and host a 2013 season, but nothing is guaranteed. It all depends on money. Whether there is a season next year or not, it is valid to say that the WPS probably shouldn’t have broken the rules that they made up. Womp womp.

But see, here’s the thing at the crux of it all: Regardless of whatever money and legal troubles the WPS is having, a lot of people are suffering because of this season’s suspension. Current players are out of a job, up-and-coming players who aren’t quite good enough to join the national team are out of the game, and the fans are out of luck. The loss of a professional league is especially rough because of the success the US national team has had over the last year; a second-place finish at the Women’s World Cup is nothing to sneeze at, and it could have turned the WPS into a more legitimate and successful league. The proof is in the pudding: before the World Cup, the magicJack team was playing to crowds of less than 1,000, but crowds of nearly 5,000 started showing up after the national team’s second-place finish. And really, is it too much to ask for a generation of girls to grow up with a professional soccer league that doesn’t end as abruptly as the ill-fated WUSA? My primary emotion is frustration, and my secondary emotion is that I really just want to watch Amy LePeilbet play soccer.

Thank you to Hannah Needleman for fact checking/ making me sound smarter than I am.