I was genuinely surprised when I saw that Last Tango in Halifax was returning for a fifth season. Partly because its existence had blurred a bit in my brain after a three-year hiatus, with happy associations severely frayed by the bizarre and unnecessary death of Kate, one of British TVs few lesbian or queer women of colour. Mostly because I thought showrunner Sally Wainwright was so utterly consumed with the production of Gentleman Jack that she couldn’t possibly have time for anything else. On the back of her meticulous dedication to bringing the story of Anne Lister to glorious life (and her eventual realisation that she messed up big-time with Kate’s lesbicide) it only seemed fair to let Wainwright off the hook and give her cozily madcap family drama another go.

Series Five picks up with all the cast settled into the lives we left them with. Retired lovebirds Alan and Celia finally have their own place looking out over the beautiful Yorkshire countryside but, seven years into their unlikely marriage, cracks may be starting to show. Caroline is juggling life as a single mum with turning round a troubled school while Gillian’s expanded her farm and has a house full of grandkids. Both step-sisters agree that despite being single and run off their feet, they might be the happiest they have ever been. Obviously, declaring this in episode one is a cast-iron guarantee that more than a few obstacles will be thrown in their way. 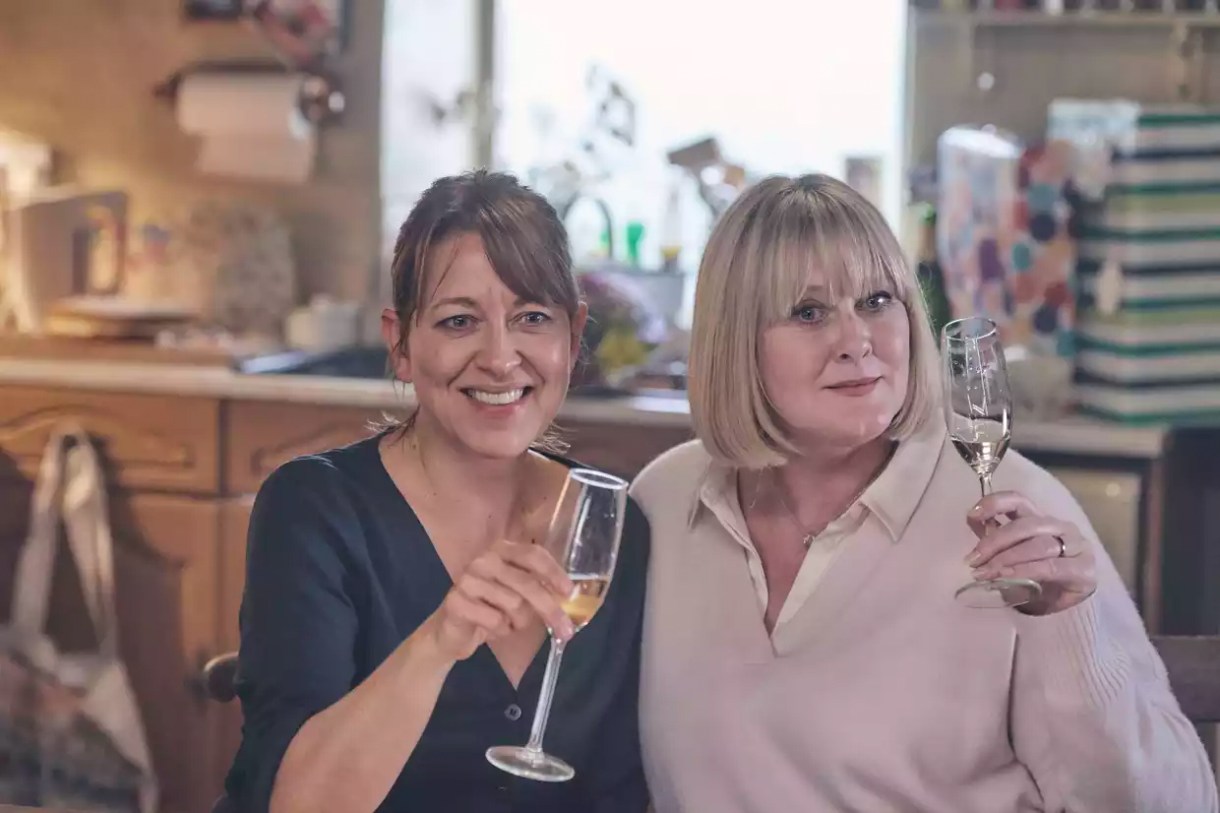 As always, Caroline’s relationships are given equal weight with everyone else’s, and her cagey responses to questions about her love life show she’s got her eye on someone. That someone is Ruth, the head of English at her school, played by out bisexual actress Lu Corfield (who you may recognise as the bonkers one in the abortion clinic in Sex Education or, if you are unfortunate enough to have seen it, last year’s dire British prison drama, Clink ). If at first it looks like a retread of the perilous path we went down with Kate, prepare to be thrown a few through curve balls as Caroline navigates her feelings for Ruth as well as fielding several declarations of love from some expected and rather less expected sources!

If you were a fan of the early seasons and can find it in your heart to forgive its transgressions, you will find the same joys as before. The things that this does well, it does very well: dialogue and delivery so real you kind of want to punch the screen to make people get to the end a sentence. Any scenes between Gillian and Caroline remain the highlight for me, and this season shows how they’ve really become rocks for each other. As grand (and rare) a sight it is to see a 50-something lesbian rocking our TV screens, seeing two fully-realised middle-aged female characters being there for each other feels equally special. When Caroline shows unprecedented vulnerability and uncertainty over Ruth, Gillian’s there providing encouragement; when both characters realise that despite their best efforts, all it takes is one thing to knock their confidence, it’s each other they turn to. Most importantly, Gillian tries every episode to persuade Caroline to go to Hebden Women’s Disco (modelled after the real life Todmorden Women’s Disco, near to legendary lesbian hot spot Hebden Bridge) and undoubtedly the most compelling reason to get to the end of this short, four-part season is to see if this happens.

This is a show that always interweaves outlandish storylines with the mundane details of everyday life. The more far fetched parts rarely succeed for me and this season is no exception. Trifling and overblown plots include Alan’s brother Ted returning from New Zealand under a cloud of mystery, and a young rapscallion Alan meets that looks like he got lost on the way to an audition for Oliver Twist . Conversely, the more realistic aspects are so realistic it hurts: blissfully, there are no homophobic comments from Celia, but only because she’s too busy being a selfish hag about her new kitchen and Alan’s job, while Alan flounders in response and they bicker over every triviality. I should also warn that perhaps in an effort to show how Caroline has softened in recent years, her wardrobe has switched from her sharp headmistress outfits of yore to an array of shapeless, pastel coloured ponchos and blouses that she could have stolen from Tina off The L Word , a vision you may find traumatic. 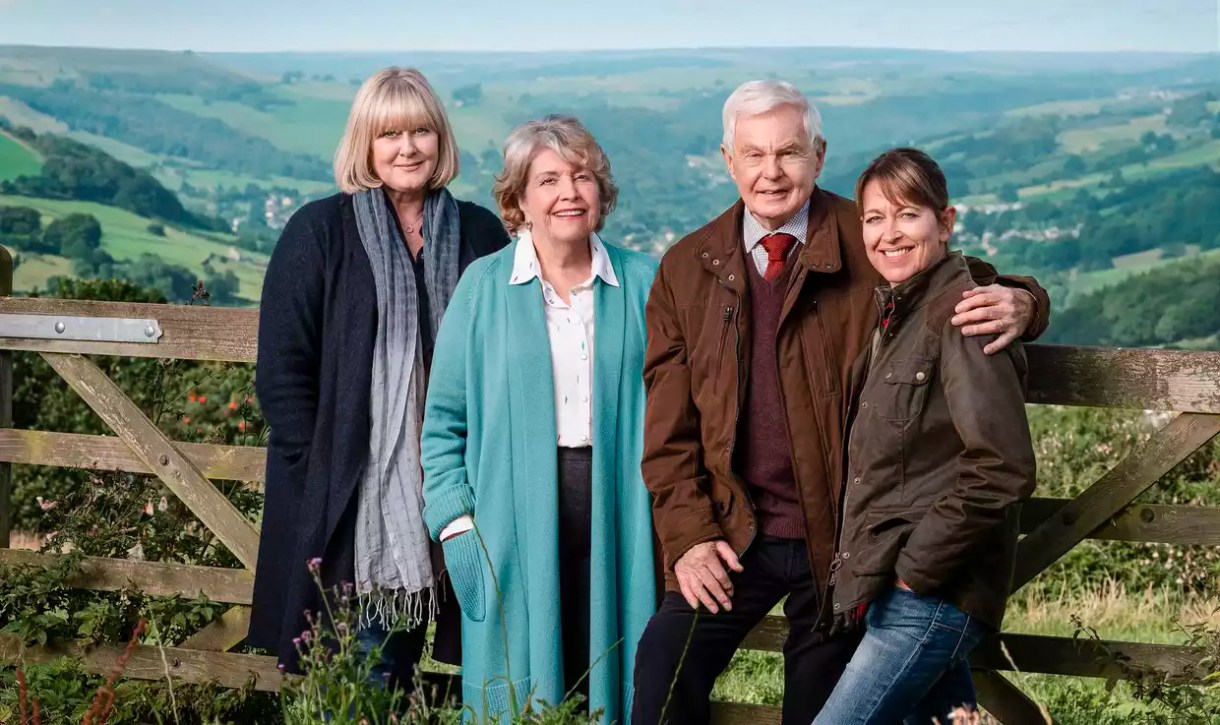 Sally Wainwright hasn’t ruled out the possibility of future episodes, even though the packed schedules of herself and the cast make it unlikely it will happen any time soon. I would not be averse to the idea based on this run: the characters remain compelling and the quality is there, even if it doesn’t quite have the sparkle of early seasons.

As a side-note, the Banksy-style giraffe that appears on Gillian’s barn in episode two was painted by queer artist Anna Jaxe, after Sally Wainwright saw a mural Jaxe had painted of Anne Lister on a building in Shoreditch. So keep up your Anne Lister fan art everyone – who knows where it will take you.

Season Five of Last Tango in Halifax is available now in the UK on BBC iPlayer, and forthcoming in the US.

Join A+
Related:last tango in halifax