Once upon a time two friends wanted to create an art project where everyone could participate and no one felt excluded. These friends, Steven Peterman and Shane Zucker, decided they would hand out blank sketchbooks and ask people to fill them up. When the people were finished with the books they’d return them to Peterman and Zucker to be displayed in an accessible library. They called it The Sketchbook Project and issued an open call, hoping people would participate.

That was five years ago. Today there are 28,000 finished sketchbooks in the project from artists in more than 130 countries. There is a library in Williamsburg, Brooklyn to house all the books when they are not on tour. There is a 12 foot trailer and 15 person van to transport the books from city to city when they are on a tour, of which there have been four in total, one that is happening right now. 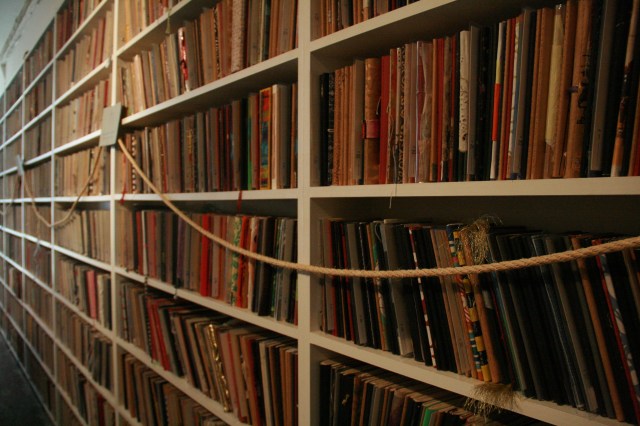 This is the Brooklyn Art Library. Those are handmade sketchbooks from all around the world. Tell me you don’t want to go to there.

When Peterman and Zucker started, they were art school students at Savannah College of Art and they just wanted to put together an exhibition. They did so successfully, so they ran with it and opened a storefront and decided to make it work. I spoke with Peterman when he took a couple of days off from the current tour, and he laughed as he told me about his beginning. “Shane and I made like, $100 off tips from the bar [at the first exhibition] and we thought we could open a business with that… we were a little ambitious.” They founded Art House Coop, put on two shows, then rented a storefront in Atlanta. “We had to pay rent, so we had to make it work,” said Peterman. They made it a goal to create interactive participatory projects, and they never looked back.

At my request, Peterman told me about some of the books and participants he found most intriguing over the years. “I think it’s really interesting [when] people use it as a way to connect. A guy came to one of our shows in San Francisco last year and his wife, who was in Iraq and who he hadn’t seen in a year, had done a book. He got to see her book, and it was really cool and really emotional for him.” Peterman also described a scenario where somebody was going to propose via his sketchbook, but then he never showed up! “That was a little strange,” he said. Well sure, I guess it is strange, but do you know what that means ladies? It means you can still be the first person to propose to your girlfriend via The Sketchbook Project! 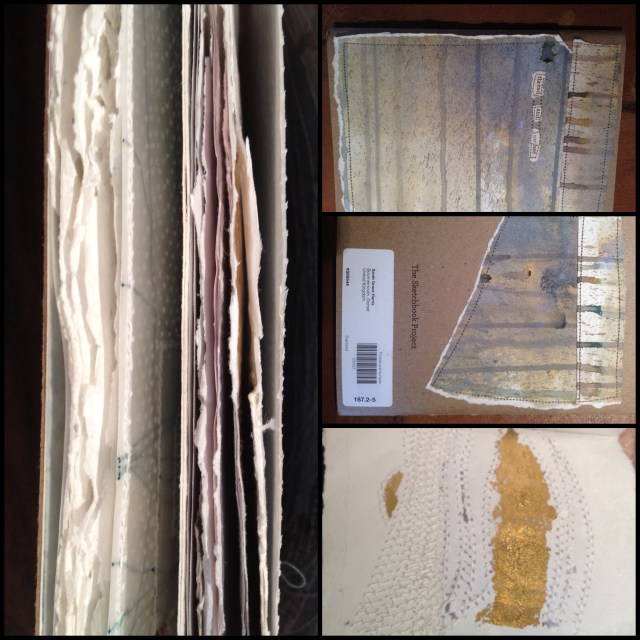 This is Sarah Grace Harris’s sketchbook. She is based in the UK and is clearly awesome. 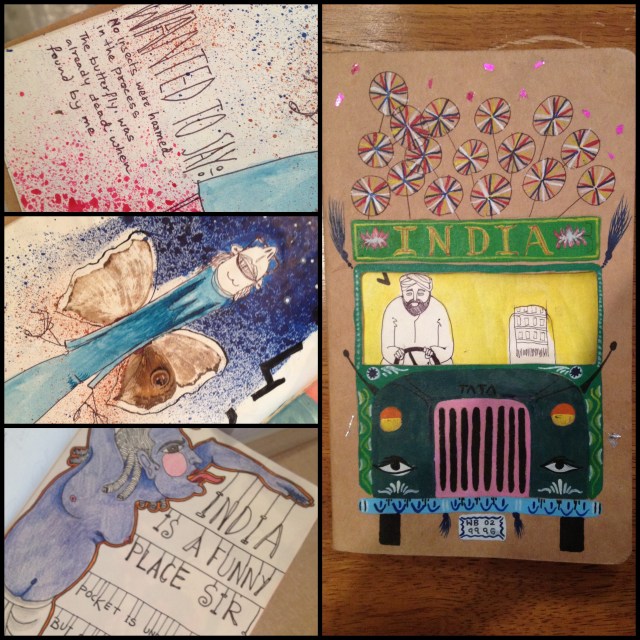 These are pages from Jit Chowdhury’s sketchbook.

So you know what I’m going to tell you to do now, right?

You need to be a part of The Sketchbook Project. Trust me. Not an artist? Doesn’t matter. If you’re human, you can make this work.

Because you’re awesome and your words and art and ideas should exist in the world. Because I’m obsessed with the idea of queering conventional spaces just by showing up, and this is the perfect venue to do just that. Because it feels good to have a creative project and a deadline. Because you’ll feel like a badass when you tell cute girls your work is housed in a library and traveling the world on tour! Because apparently an adorable creative teacher assigned this as a project to her 3rd grade class, and if they can do it, so can you!

If The Sketchbook Project feels a little bit overwhelming, you should at the very least check out some of Art House Coop’s smaller projects and consider participating in one of those in the future (they’ve done a lot of amazing free community engagement projects but are most well known for The Sketchbook Project.)

You can also catch the end of the 2012 tour when they visit Toronto (right now!), Philadelphia, Atlanta, Florida, Austin, London, and Australia. If the tour isn’t coming to your city, don’t fret — the sketchbooks can be digitized, many of them are available for viewing online. Take a peek and start thinking about how you will fill your sketchbook. I can’t wait to see your work in the Brooklyn Art Library come 2013.