It’s been a good month for queer hip-hop. Dudes are kissing dudes in music videos, Autostraddle dropped a bangin’ female rap timeline, and everyone’s in a tizzy over Frank Ocean, who, let’s be real, definitely deserves tizzies. But what’s cooler than a male hip-hop artist who made some awesome music, broke into the mainstream and then confessed to an unconventional past love on Tumblr? Well, what about a queer female hip-hop artist who made some awesome music, has never hidden her identity, and is gaining mainstream success anyway? No, wait, I think we can do even better. How about TWO queer female hip-hop artists who make awesome music together, have never hidden their identities, are still in their twenties, and have matching Thriller tattoos? Meet my new favorite band. 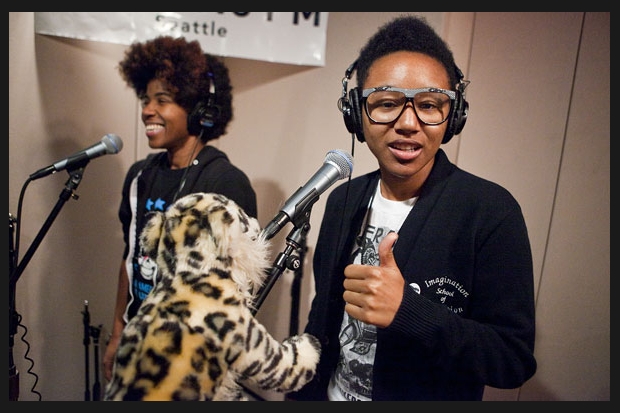 Caption: Cat, other cat, and Stas. via Spin.com

THEESatisfaction is one half Stasia “Stas” Irons and one half Catherine “Cat” Harris-White. Stas and Cat love Shakespeare, ancient mythology, outer space, Sun Ra, TLC, thrift stores, and each other. All of this is apparent in their music, which contains sonnet-worthy cadences, otherworldly funk, vocals that pour down from the heavens, and all the soul of a worn out button-down. It’s hard to categorize, but since we’re smushing words together, I think it’s fair to call it hipafrofunkjazzfeministrapneosoulhop.

Exclusive: The members of THEESatisfaction cutely trade off listing things.

The pair met in Seattle, where they went to different colleges but performed at the same open mics. They swapped digits, and music, and soon they were singing their favorite songs to each other, and then writing their own songs, and making their own beats, and recording it all on GarageBand. By the time they got signed to Sub Pop in 2011, they already had 6 EPs online and were a staple of the Seattle hip-hop scene, playing shows constantly and collaborating with the likes of Shabazz Palaces and Mash Hall. Their major-label debut, awE naturalE, was released in March, and it’s a half-hour mind trip, a heady mix of patchwork homage, sonic futurism, identity politics and party beats. Take “Enchantruss,” which marries references to slave songs, Octavia Butler and All in the Family to a backing track made of chopped-up baby talk. Or first single “QueenS,” in which Stas and Cat equate dancing with political awareness over the best buildup since “Sandstorm.” This album could soundtrack your beach party or your WAGS thesis defense. 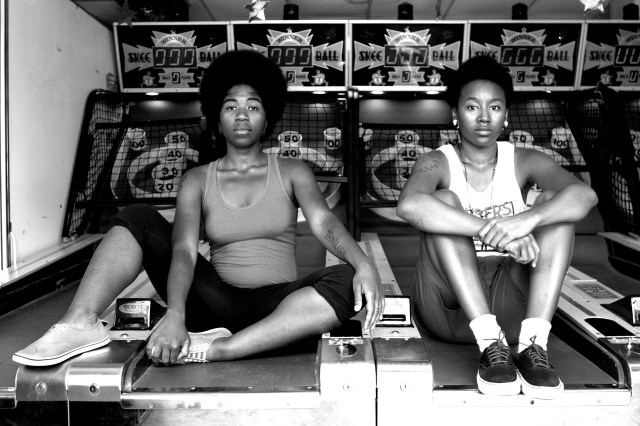 Erudite, yet somehow ready to party. via Charla Harlow

THEESatisfaction has a way of making these disparate ingredients strengthen each other rather than getting in each others’ way. They’re fantastic at playing their voices and personalities off of each other, taking turns echoing or supporting each others’ syllables, or handing the thread of a story back and forth like a seasoned comedy team. When Cat told MTV, “Stas is the cook, I’m the baker,” she was talking about food, but the metaphor applies – Stas darts around the beat, pouring out liquid raps and salting songs with perfectly timed “oohs” and “ahs.” Cat hangs back and lets everything rise, carried by her dreamy voice. When they play live, they dance like they’re singing a round.

They do share a racial and sexual identity, and they make this a vital part of their music. It’s not downplayed or overemphasized, though – it’s just there, which is refreshing in an entertainment industry that sometimes seems equal parts closet and rainbow megaphone. As Stas told The Quietus in March, “We’ve embraced our weirdness. Growing up, we were both queer black women. It was kind of difficult to, like, go through high school having all those attributes. Being weird, being called “weirdos” and “queerdoes” and all kinds of things . . . it’s something we embrace.” Cat added: “Basically, it’s who we are. And it will have to be dealt with by the world!”

“We kind of wanted to take the media into our own hands, cause we don’t see a lot of black women being highlighted in a certain way on television – music videos in particular. It’s usually just one shade or one type all the time. So we wanted to fuck around with it.”
– Stas

This attitude is so kickass, and the fact that the world is now more willing to “deal with,” and in fact embrace, this group than ever before fills me with hope. Sub Pop let them produce their whole album on the strength of internet demos, sent them on tour, and hired pioneering black female journalist dream hampton to direct the music video for “QueenS.” The mainstream music press has extolled the group for their lack of posturing, placing them in opposition to shockmongering groups like OddFuture. When you’re queer, black, female, and thoughtful about all of it, lyrics like “I am the bitch on the side” contain so many layers of meaning, there’s no need to manufacture swag (are they singing to the straight community, or the white community, or the patriarchy, or a girl who can’t commit?). And they’ve gained fans of all stripes, which makes their shows eye-opening on another level – “people who are used to being around a bunch of queer people, or used to being around a bunch of straight white people, they all have to stand in a room together in order to see us,” Cat points out. Someday, when the entire world unites in peace and harmony and mutual understanding while watching THEESatisfaction play the first hip-hop show on the moon, don’t say I didn’t warn you. Bring yourself.