I have a new goal in life: I absolutely need to be featured on Underground New York Public Library.

This goal comes with a few personal feelings: I’d like the photograph to be taken on a day when I’m looking particularly cute; it would be great if I could be wearing a floral print dress and sandals as opposed to my gym clothes. I’d like to be reading an impressive book (like, say, The Hunger Games or anything by Alison Bechdel) not something boring like my Instapaper on my iPhone (though to be fair, thanks to Riese my queue is actually never boring.) Of course my feelings don’t really matter — if Ourit Ben-Haim happens to find me on any given day and snaps my photo, I’ll become another image stored in the quite, underground story she is creating and sharing. And I’ll be grateful to add to that larger tale.

So let’s back up. What is Underground New York Public Library and who is Ourit Ben-Haim? 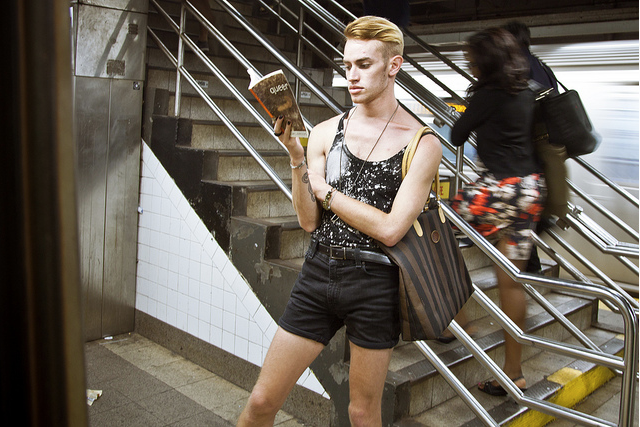 Underground New York Public Library is, according to its website, “a photo series featuring the Reading-Riders of the NYC subways.” That means if you have ever read a book while taking a NYC subway, you may be part of this project. Ben-Haim is the photographer and curator. In the “about” section of the site she explains, “I’m fascinated by how we apply ourselves to stories and discourses. In so doing, we shape who we understand ourselves to be.”

If you like books and street photography, UNYPL is going to be your new happy place. Like a regular library (though to be clear, UNYPL is not affiliated with The New York Public Library), there are “library hours.” Ben-Haim posts daily Sunday-Friday. She posts regular features including a Sunday Morning Bible, a Tuesday Translation, a Friday eReader, and unsolved titles. The translation posts and the unsolved titles are my favorite: the tumblr community pitches in and together everyone tries to shed some light on the mysterious book covers. The library is closed on Saturday. 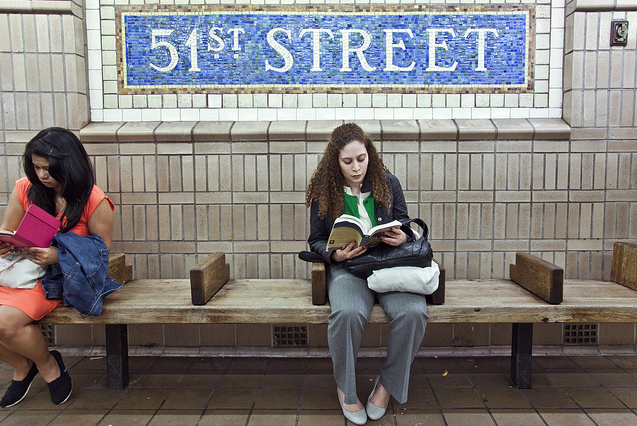 As a photographer who is personally terrified of street photography because of a bad experience trying to shoot an artist on Venice Beach when I was 14, I was dying to know if Ben-Haim gets nervous shooting strangers. In an effort to capture the “true reading experience,” she does not alert her subjects before she takes their picture. Clearly this is a question that interests a lot of people, as one of her FAQs answers the question, “Is it wrong to take photographs of people without their permission?” When I emailed Ben-Haim to ask how she approaches strangers, she answered simply and poetically. “Who is a stranger, really? We’re all connected,” she wrote to me. She went on to say it’s a difficult question to answer without having a long conversation, but her experience in general is very pleasant. A man did yell at her once, but to read her account, even that experience ended positively.

Ben-Haim presents herself as calm and thoughtful in her posts on UNYPL, and that same peaceful voice came through in her emails to me. When I asked if she has big plans for the project in the future, she said that she does have plans but is also content right now. In what is sure to be the most lovely meta next step, she is putting together a book of her photographs. “I want to show how we’re all connected,” she wrote. When I asked what she is currently reading herself she demurred, but shared that she plans to do a self-portrait series in the late fall, with books that have been or are currently particularly meaningful to her. 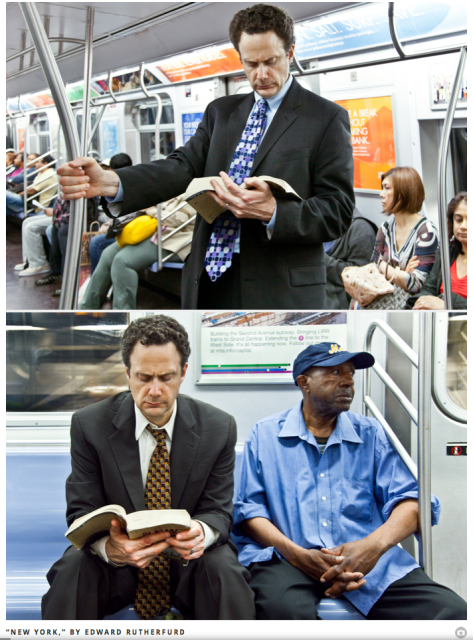 I also asked if she had a favorite photo in UNYPL. She wrote to me that she never knows how to select favorites, but directed me to one of her “most beloved moments” from the library, pictured above. She first shot this man in the middle of May, when he was at the beginning of “New York.” She found him again in June and he was working toward the end. He happened to notice her and expressed interest in the project, then told her why he loves the subway: “There’s a stillness here,” she writes that he said. “The atmosphere is just great.” Ben-Haim writes that she agrees with the man, citing him and her other reading riders as “part of what makes it so.”

So whether you live in New York or not, dive in and enjoy the stillness and peace at UNYPL. You might be surprised by all the stories you find without having to read a single word.