Greetings, you strange, rainbow colored earthlings! If you haven’t noticed yet, it’s Pride month on this planet of ours, where Autostaddlers from all over the world (and I mean all over the world) will be meeting up to celebrate. And girl do we have a lot to be proud of. A lot of kick-ass herstory for starters! Riese showed us these portraits of lesbian writers and Sawyer wrote about Vita Sackville-West and her writing and wooing. Lizz took us to the MTV Movie Awards and Carmen sat on Kanye’s throne — no word yet on when she’s coming back down. We won a thing w/r/t DOMA, even though Mitt Romney thinks our issues are just “shiny objects” and some 14-year-old radio host thoroughly offended us and the rules of English grammar. But, like, Michelle Obama, the NY court and *gasp* a Baptist Pastor in Texas seemed to have all the right answers. Meanwhile, there were girls kissing girls on your television and girls in their rooms and girls building things on your computer screen. Crystal gave us our weekly dose of  sweet lady music, Laneia geared up for Bonnaroo and Riese made your reading list even longer. Intern Grace is pretending not to be sick, but hopefully she had a chance to cuddle up with a book and/or its (hopefully) great movie adaption. Speaking of movies, Julie and Brandy returned to your box office with The Hunger Games and speaking of being hungry, have you tried this turkey chili or these peanut noodles? And while you do that you can even listen to one of these eight podcasts that aren’t This American Life. Oh God, you guys! Aren’t you just swelling with Pride right now? Now go put on your rainbow onesie with tiny unicorns on it and we’ll see you out there!

On Pride Month and Autostraddle Meetups:

On DeAnne Smith and That Pesky Time Thing:

The Brief, Drunk History of Homos Award to Bra: “I just read “A Brief History in Time” by Stephen Hawking and watched an old epi of the “L word” when Jenny slept with Marina. Seriously, I just at this moment (not too sober) learned the everything in time and vaginas. I do not think I can emotionally handle this kind of relative gravity of understanding. OMG, Albert Einstein, Wanda Sykes, Kelly Clarkson!!!!” 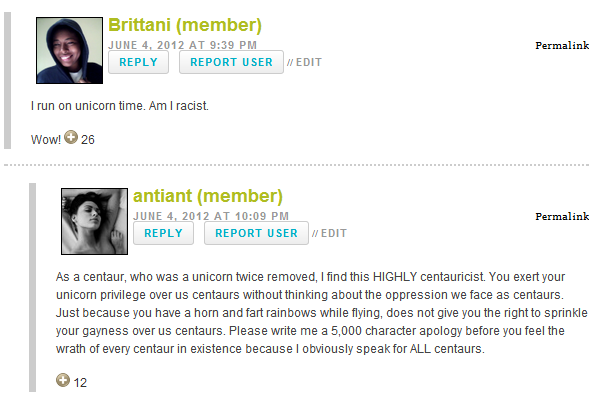 The Shore Thing Award to Jess: “i’ve never wanted to be a grain of sand so much in my life.”

On The MTV Awards Liveblog:

The He’s No Stranger to Scissoring Award to Emma: “Johnny Depp is my dream woman.”

The Spotter Award to Abbey: “There’s some major Autostraddling going on in that last video. Approved.”

The That Homophone’s a Homophobe Award to Morgan: “aw what a waste of a last name that looks like cowgirl[…]”

On Girls Kissing on the Teevee and Other Important Stories:

The We Should Probably Check On Her Award to novastar: “Dianna Agron: ‘I’ve kissed girls before, it’s fun.’ And then paperOflowers physically exploded.”