For her project a girl and her room, photographer Rania Matar took pictures of teenage girls in The U.S. and Lebanon in their rooms. She says of the series:

“This project is about teenage girls and young women at a transitional time of their lives, alone in the privacy of their own personal space and surroundings: their bedroom, a womb within the outside world.” 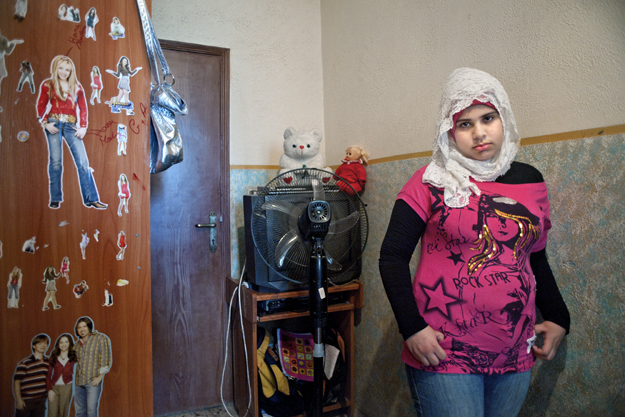 In May, Matar published a book featuring the series. It’s called “a girl and her room,” and I have it and I like it so much. I think you would like it too. It’s heavy and beautiful. The book contains the photographs from the series, two essays by other authors, and sometimes a line or two of text from each pictured girl. The photographs are so full of wonder but also hesitation, nervousness, uncertainty.

Matar has photographed so many girls in so many bedrooms, so many adolescents in their nests, looking at the camera or in mirrors or at the ceiling or at a book or looking forwards or backwards or both at the same time.

So many girls, so many rooms: Sidoine has purses hung on her wall in Belmont, MA, and between the purses she’s pasted logos like Sephora, Hollister, Zara, Abercrombie. Rocio in Dorchestor, MA, is small and pregnant, posing between a True Blood poster and a photograph of Rocio with her friends. Reem and Raneia share a small room with pink walls in the West Bank, and their bed stretches from wall-to-wall and is draped in a neon green comforter, and one plays a violin and the other holds a violin, ready to smile or not.

Art curator Susan L. Stoops wrote of the series: “A Girl in Her Room is a powerful statement about the persistence of Western ideals of beauty and the proliferation of media images and commercial products directed at young women and their insecurities — “Am I beautiful?” “Am I loved? Who are my friends? Who are my role models?” 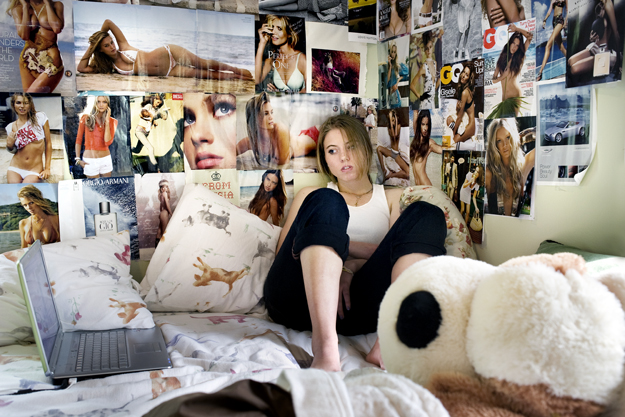 When I returned home from my first year of boarding school, I returned to a room decorated for the girl I used to be and I felt ashamed of it, retrospectively embarrassed for the 10th-grader who’d plastered her closet in pictures of Jared Leto and Claire Danes, encircled the top of her walls in Absolut Vodka ads and created a dancing parade of Delia*s models over her bed.

When I’d moved into my dorm at boarding school I’d brought that girl with me, and her Leonardo DiCaprio shrine lasted just about as long as the haircut I’d arrived with because my best friend informed me immediately that my decor was too “teeny-bopper.” He was right. But it wasn’t just what he’d said, either, it was about me, too: I was growing up, getting serious about things like poetry and the future, and now I needed to be surrounded by artsy black-and-white postcards and artsy black-and-white photographs of my friends/muses. I needed to be surrounded by things that were real, not things that were fake. I needed to figure out how to tell the difference.

And when he’d said that, it reminded me of what Angela Chase said about dying her hair red in the first episode of My So-Called Life — — “When Rayanne said my hair was holding me back, she wasn’t just talking about my hair. She was talking about my life.”

To me, my room has always been my life. I’ve always been an introvert, a reader and a writer, which means I spend a lot of time in my room alone, and I like to look at things that inspire and excite me — poems, photos, pages from ‘zines, contact sheets, collages, birthday cards, things I’ve collected along the way from the people I love.

As a teenager, though, I marked my territory by filling every inch of available wallspace with seemingly everything I’d ever enjoyed looking at, ever: an impressive collection of Airwalk advertisements starring Jenny McCarthy, a poster from the last school play I’d been in, photographs from middle school graduation, oasis stickers, CK One ads, a muppets poster, old photos of my parents, picture-strips from the photobooth at Cedar Point.

Sometimes I think my room still looks like the room of a teenager. When you’re an adult you have all kinds of agency and can go wherever you want so there becomes this stigma of preferring to stay right where you are. Here I am, though.

Raina Matar was born and raised in Lebanon and moved to the U.S in 1984. Most of her work, like her first book Ordinary Lives, focuses on women and children in the Middle East. She hopes to “give a voice to people who have been forgotten or misunderstood.” Matar lives in Massachusetts, teaches documentary photography at the Massachusetts College of Art and Design and spends summers in Lebanon, teaching photography to girls in refugee camps there.

Matar has four children. She started photographing her daughters and their friends after being fascinated by their transition from girlhood into adulthood — “the adult personality shaping up, and the self-consciousness now replacing the carefree world they had known and lived in so far.”

She noticed how self-conscious the girls were around each other and so began asking to photograph them alone, in a location of their choosing. Many chose their rooms: “I realized that was the nexus of a project. The room was a metaphor, an extension of the girl, but also the girl seemed to be a part of the room, to fit in, just like everything else in the room.”

First she photographed girls in the U.S.: “I was discovering a person on the cusp on becoming an adult, but desperately holding on to the child she had barely outgrown, a person on the edge between two worlds, trying to come to terms with this transitional time in her life and to adjust to the person she was turning into.”

Then she decided to take the project to the “two worlds I experienced myself as a teen and a young twenty-year old: the United States and the Middle East.” It personalized the project for her, and she “became fascinated with the similar issues girls at that age face, regardless of culture, religion, and background, as they learn to deal with all the pressures that arise as they become consciously aware of the surrounding world, wherever this may be.”

The first thing I do if you invite me over is investigate your bedroom: your books, photographs, the items on your dresser, if you have one. I love bedrooms, especially the ones with lots to look at. I envy my friends with spare, minimalist bedrooms where everything is hidden and neat, just like it was at IKEA, and all the photos are framed and not tacked onto that slab of corkboard I’ve been carting from apartment to apartment for fifteen years. But I also wish, when I enter their rooms, that there was more to see.

I’m just obsessed with rooms. I have a tumblr I made just for keeping track of rooms I like.

“When I photograph the girls, almost in all instances, I forget that I am not one of them, as if I am instantly thrown back in time,” Matar told PhotoEye in a recent interview. “Then I pass a mirror and it is a call back to reality for me.”

A Girl and Her Room is currently being exhibited in Germany at the Leica Gallery in Solms, where it will remain for the remainder of the month. In the fall and winter, there will be exhibitions in Boston, Atlanta, Portland and Daytona Beach.

The book is on sale now.