Almost exactly a year ago, CeCe McDonald was walking with four friends past Schooner Tavern in Minneapolis. A group of people (who are white) standing outside the tavern noticed McDonald and her friends (who are black) walking by, and announced this with a series of racist and transphobic slurs, ranging from the n-word to “look at that boy dressed like a girl.” McDonald and her friends tried to walk away, but one of the taverngoers, Molly Flaherty, hit McDonald in the face with a bottle, giving her deep lacerations. A fight ensued, and when McDonald tried to leave the scene, Flaherty’s boyfriend, Dean Schmitz, pursued her. He had been one of the voices shouting slurs; when she saw that he was following her, McDonald pulled a pair of scissors from her purse and turned to face him. Schmitz ended up dying of a chest wound that night, and McDonald’s life has been a nightmare ever since.

McDonald was arrested, and according to TransGriot, was “denied medical treatment for her injuries, was interrogated for hours, placed in solitary confinement on top of that and forced to sign a confession that she later recanted.” Molly Flaherty wasn’t arrested until May 11. Flaherty is charged with “second degree assault with a deadly weapon and third degree assault causing substantial bodily harm;” McDonald was charged with first-degree manslaughter. 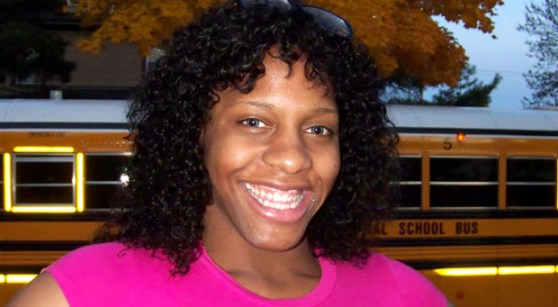 When she refused to accept a plea deal on that charge, because she maintains that her actions were taken in self-defense, she was charged with second-degree intentional murder. Yesterday, June 4th, McDonald agreed to plead guilty to second-degree murder, and accept the minimum sentence of 41 months in prison. Right now, McDonald is incarcerated in a men’s prison. Although CeCe is a transgender woman, the State Department of Corrections has said that “because he is being housed as a male with Hennepin County… We will intake him as a male at St. Cloud prison.” The state has also said that “the state will initiate an effort to make its own determination of McDonald’s gender” and choose a later prison assignment based on that, but their egregious misgendering of her in their formal statement doesn’t necessarily bode well for that process.

The instances for outrage are nearly innumerable — the fact that the violence visited upon CeCe and her friends has never been treated as a hate crime, the fact that CeCe’s actions have never been read as self-defense by the legal system, the fact that the state’s response to a transphobic attack is to further misgender and endanger one of its victims, and the fact that information about the dangers of daily life for trans* people and Schmitz’s own criminal history and swastika tattoo weren’t deemed admissible in court are all reason for anger. Taken together they form a mosaic of how deplorable the situation is for trans women of color, and how McDonald’s intersecting marginalized identities have meant that the system meant to protect her worked against her at every turn.

When CeCe McDonald and her friends were attacked, it formed part of a narrative that’s familiar to many different demographics: people of color being attacked by white people, gender-based violence, and transphobic violence. CeCe McDonald is a woman of color who defended herself against a white man, and she’s also a transgender person who defended herself against transphobic harassment and violence. None of these groups have been able to rely upon the US justice system to defend their rights or physical safety with any sort of consistency, and they are also groups that experience violence with terrifying frequency.

Thanks to the 2009 Matthew Shepard and James Byrd Jr. Hate Crimes Prevention Act, gender identity is now included in the federal definition of a hate crime — to be clear, crimes motivated by a victim’s actual or perceived gender identity (as well as race) are supposed to be legally defined as hate crimes. Minnesota’s self-defense laws, as of February 2012, allow use of deadly force by gun owners in virtually any situation in which they perceive themselves to be in danger, extending gun owners’ rights to take the life of another if they feel their own is threatened literally anywhere, whereas the danger previously had to be inside their own home. One lawmaker, quoted in the Star Tribune, said that “This is about the presumption that the law-abiding citizen has acted in self-defense.”

Of course, Minnesota’s current definition of self-defense wasn’t yet in effect in June 2011. The law regarding self-defense overall in the US states that a person may use “reasonable force” in their own defense or the defense of others. “Reasonable force” is not necessarily deadly — deadly force is only permissible if the person in question has”reasonable fear of serious injury or death.” Some states also have a “duty to retreat” clause, which specifies that the person in question must try to flee the situation and can only use deadly force if they’re unable to. CeCe McDonald did try to leave the scene; one of her attackers chased her, which is when she used force against him.

The force CeCe McDonald used turned out to be deadly; she agreed to a plea bargain on second-degree murder because it was clear that her claim of self-defense would not be taken seriously. Expert testimony about the life-threatening danger that trans women face constantly wasn’t considered admissible evidence in McDonald’s trial; if it was, it would have been abundantly clear that McDonald had excellent reason to “fear serious injury or death.”

In terms of statistics, “of the 22 people who were murdered in 2009 because of their sexual orientation, about 80 percent were people of color and half were transgender women; the other half were overwhelmingly men who defied gender stereotypes.” In the numbers for 2010, 70% of anti-LGBT murder victims were people of color; 44% were trans women. Being a transgender woman of color is one of the most dangerous things you can be in America. The months previous to the attack on McDonald, Brandy Martell and Paige Clay, both transgender women of color, were murdered in possible hate crimes. When Schmitz pursued McDonald as she tried to escape the slur-shouting strangers who had attacked her and her friends, she already had serious facial lacerations, and as McDonald’s friend Rai’vyn Cross explained to Democracy Now, was used to experiencing threats and violence “on a day-to-day basis.” How could McDonald not have feared serious injury or death, and with excellent reason? How can she not expect serious injury and physical danger in St. Cloud prison, incarcerated with a population of men? How can she possibly respond to that, if all her possible responses to violence are going to be read as somehow worse than the violence they are meant to defend her against?

It’s difficult not to compare McDonald’s case to that of Trayvon Martin and George Zimmerman; Zimmerman also claimed self-defense after shooting and killing Martin, who was only 17. Martin was black, and Zimmerman is not; Zimmerman wasn’t arrested until more than six weeks after Martin’s death, and it’s unclear whether he was ever in danger. McDonald is black, and a trans woman, and had already suffered serious injuries; Schmitz was a white cis man. McDonald was arrested at the scene and her bail was set at $500,000, while the group of her attackers left the scene of the crime freely. It’s hard to find the justice in either case, but the two taken together put the logic behind them into terrible focus.

In response to the criticism around the case (Leslie Feinberg was arrested for spray painting FREE CECE on on the Hennepin County Public Safety Facility, and jailed without bail) the Hennepin County Attorney’s Office released a statement affirming that:

“Gender, race, sexual orientation and class are not part of the decision-making process. The charges filed took into account the evidence in this case; this outcome is an example of the criminal justice responding proportionately to a tragic situation.”

If one is willing to be very generous, the county’s aspirations towards making judicial decisions blind to gender, race, and trans* status is at least well-intentioned; it speaks to a desire to provide equal justice for all. But what’s incredibly clear in this case is that gender, race, and trans* status are very much part of the “decision-making process” when it comes to violence, both individual and systemic. To pretend otherwise when considering that violence in a court of law is a betrayal of the people the law is meant to serve, and functions only to perpetuate that gender-based, race-based, and transphobic violence. It is the opposite of justice.

In a particularly jaw-dropping sound bite, Judge Daniel Moreno, who presided over McDonald’s trial, told her “Some have indicated that you feel a great deal of remorse… I hope that’s true, because that is the only thing that could make a difference in your future.” McDonald will likely spend roughly two years in jail. Right now, it seems clear that the system responsible for sending her there feels no remorse. It’s the rest of our shared responsibility to change that, for that seems to be the only thing that really could make a difference in CeCe McDonald’s future, and our own.