This review of Resident Evil has mild spoilers, mostly about the lesbian character. Proceed with caution.

The new Netflix adaptation of Resident Evil had me once again wondering: has queer representation evolved to the point where we can have lesbian villains without lesbianism being villainized? I personally think the answer is yes, when done correctly, though it’s a fine line to walk. The criteria I usually use in my own personal viewing is: a) is their lesbianism being used against them or held over them in any way; b) are they using their lesbianism to do their evil deeds, e.g. seducing someone’s wife, etc; c) would the major actions or plot points be any different if this character were straight. And if the answer to all these questions is ‘no’ it’s usually safe to assume the lesbian villain is just a villain who happens to be a lesbian. And I think Resident Evil does a good job of walking that line. 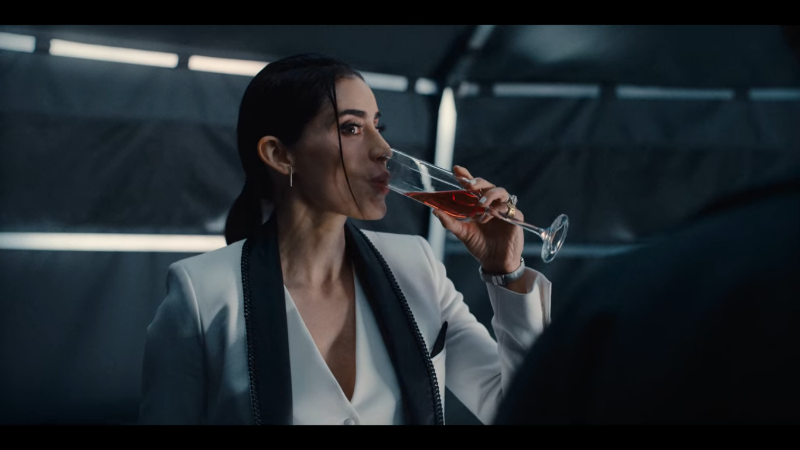 All I’m saying is, if she ripped me a new one for getting her coffee order wrong, I would treasure that memory.

Very specifically, I think Resident Evil does a good job of exposing Evelyn Marcus for the sociopathic CEO she is, while allowing the fact that she’s a lesbian be just that: a fact. One fact on a long list of adjectives that define her, and not one that specifically informs her decisions throughout the course of this show, for better or for worse. I cannot say Evelyn is a… nuanced character, but that’s okay because none of the characters are. This is very much a video-game-turned-series, and we’re here for the existential questions of “at what point could someone have stepped in and prevented the zombie apocalypse” or “would you shoot your kid if they got bitten by a zombie” and other such interesting plot twists. We’re here for stumbling zombie hordes and awful giant spider monsters and humongous mutant gators. We’re here for attractive women smeared with dirt and blood kicking ass and taking names. We’re not here for nuance. 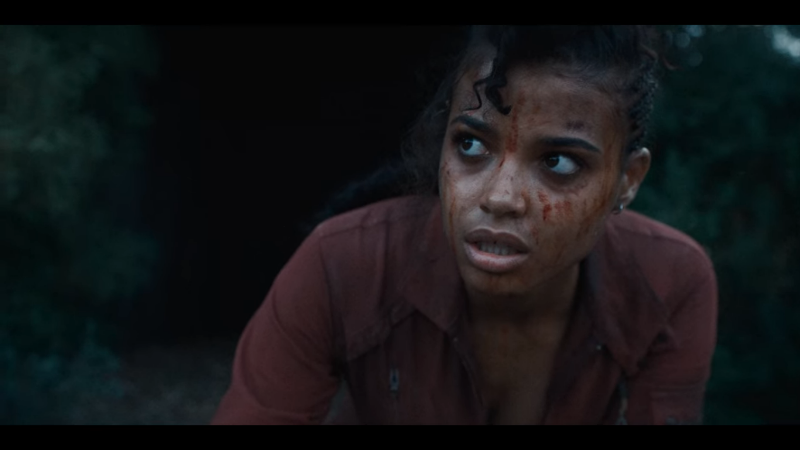 WHY IS THIS SO ATTRACTIVE. Am I broken? Or is it because there’s nothing you could do to Ella Balinska’s face to make me dislike it?

Now, here is where I confess I am not familiar with the Resident Evil canon. I’ve never played the video game (though I’ve heard there’s a giant hot vampire lady that the internet wanted to step on them, so maybe I will someday) nor did I watch the animated series nor any of the seven (7) movies. But I love a post-apocalyptic tale, and I can fuck with a zombie story. So I went into this with little to no expectations; I’m sure some of the Raccoon City/Umbrella stuff was familiar to those who have played the game, but it was all new to me. I actually found the lore interesting; a company whose scientist set out to cure depression and other mental illnesses with a pill called Joy that gets out of hand because of capitalism? Honestly, the general trajectory of the story doesn’t feel too far off from another show I just (belatedly) started, Dopesick. And that’s not sci-fi.

Capitalism is where our lesbian CEO comes in. Evelyn Marcus is the CEO of Umbrella, and she doesn’t care about the pesky little T virus turning animals in their testing lab into undead brain-hungry monsters. All she cares about is making a buck. She inherited a failing company from her father and she’s determined to bring the company to greatness, no matter the cost.

Evelyn Marcus is many things — smart, cold, a sharp dresser with amazing hair game — but she’s also a wife, and a mother. Her wife, Diana, is a nervous woman who dotes on Evelyn when she gets the chance. 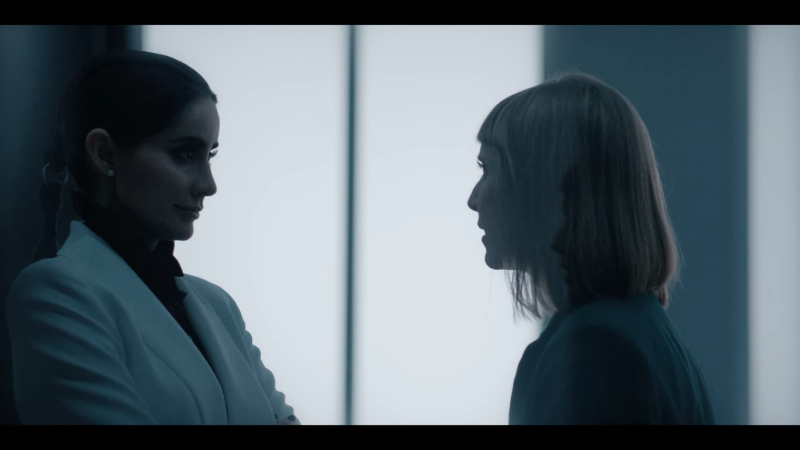 I also think because of when in COVID they filmed, they were limited to how much kissing they could do. Which is sad for me.

But I do wish we had seen more of them together. Because aside from one scene of them doing goat yoga together (which was admittedly cute, to see Evelyn go out of her comfort zone and risk looking ridiculous to do something with her wife) there wasn’t too much insight into their relationship until it all went sideways at the end of the season. And even then Evelyn claimed she did what she did out of love for her wife and for their family, but I only know that because she said it out loud. I wouldn’t have gathered it just from watching. 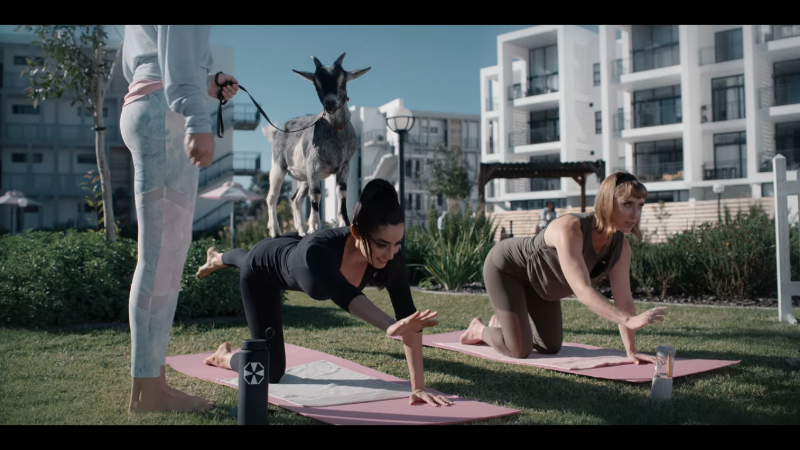 Evelyn doing goat yoga when her employees are scrambling to do her bidding feels correct.

The show bounces between 2022 and 2036, and at first Evelyn’s future fate made me feel a little sad, but then some of her actions in 2022 are revealed and I no longer felt particularly bad for her. She’s a villain, almost cartoonish because of the broad strokes with which all the characters on this show are painted, but gosh did I enjoy watching her tear men down without breaking her high-heeled stride. Paola Núñez wasn’t given all that much to work with on paper, but she made a meal of every morsel. 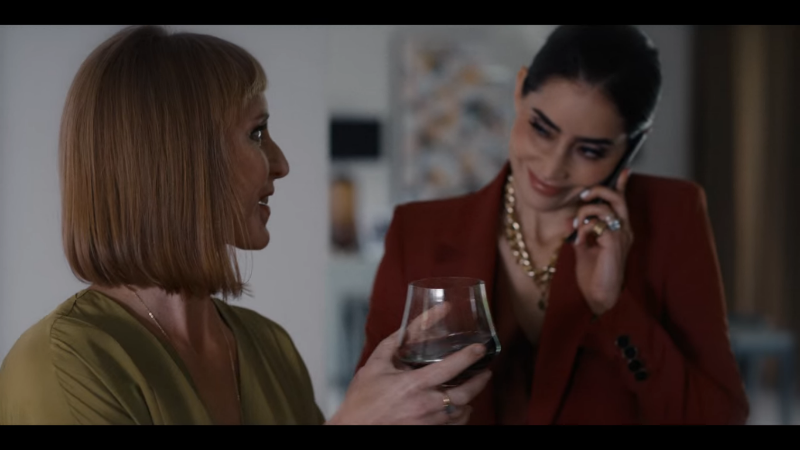 “Just on the phone with my very regular job, definitely not kicking off an apocalypse or anything!”

Overall, my opinion of the show was: I had a good time. Was it the deepest or most thoughtful show I’ve ever seen before? No. But was I expecting it to be? Also no! I enjoyed watching Ella Balinska as Adult Jade run through the dirty streets of a zombie-infested world, even if they inexplicably made her have an American accent. I enjoyed watching Young Jade and Billie unravel the mystery of the company their father works for and realize their whole life has been laced with lies. And I enjoyed seeing what new-to-me monstrosities could be lurking around any given corner. There were even moments where I could really tell it was video-game-inspired and I could imagine what a playthrough of the scene would be like, and I enjoyed that, too.

I have some minor gripes with the show; as I said to my friend when I finished, “I have notes.” It’s a phrase I use when I think the show has the ingredients for success but didn’t quite bake it long enough, or forgot to mix it together properly, or didn’t use ENOUGH of one ingredient. I could have used a little more sister stuff in 2022, a little more of how Billie felt about everything going on, a few more blanks filled in on what went down between 2022 and 2036. And frankly, if the powers that be on this show weren’t promised a second season of this show in contract form before they ended the season the way they did? I’d be furious. Maybe they were banking on the popularity of the video game, and I’ll withhold my ranting until Netflix announces its fate. But if this is where the series ended, it would be a bummer. I like my apocalypse content to end with a dash of hope amongst the ruin, and hopeful is decidedly not how I felt when the end credits of the final episode rolled. It felt like a messy but promising start to a story…not the end of one.

So, all in all, do I wish there was more character development across the board? Yes. Do I wish I had more answers than the show’s eight episodes left me with? Sure. But I went into this show looking for a few nights of gruesome escapism, and gruesome escapism is what I got. The lesbian ice queen was just a frozen cherry on top.

Maybe the real Resident Evils are the lesbian CEOs we met along the way.