Trolls on Twitter got you down? Tired of Mark Zuckerberg’s Real Name Policy? Thinking of a social network with a heavy queer and trans presence, actually approachable moderators, no ads, considerations for content warnings, and a community-oriented open-source ethos? Mastodon may just be your next haunt.

What Even Is Mastodon

Mastodon is a decentralized social network — which means that instead of being hosted and managed by just one organisation, like Twitter or Facebook, various people can set up and run their own versions (or ‘instances’) of Mastodon. Each instance administrator sets their own rules and styles, providing a wide choice of instances to join based on interests and needs. It’s also federated, which means that regardless of your home instance, you are still able to communicate with people from other instances — the same way someone using Gmail can still email people using Hotmail or Yahoo Mail without issues.

Mastodon was originally developed by Eugen, also known as Gargron, who wanted to create a cleaner and more accessible version of another decentralized social network, GNU Social. While Gargron is still the primary developer, Mastodon’s open-source nature means that it’s open to contributions from anyone, such as code, bug reports, or suggestions for features.

Many instance moderators put their own flair on the Mastodon UI, such as renaming parts of the system or adjusting character limits. (The instance I’m on, which is fox-themed, calls status updates “rawr!”, sharing an update “awoo”, and liking an update “lick”.) They also have more tools to manage moderation of their instance, including blocking and limiting membership. 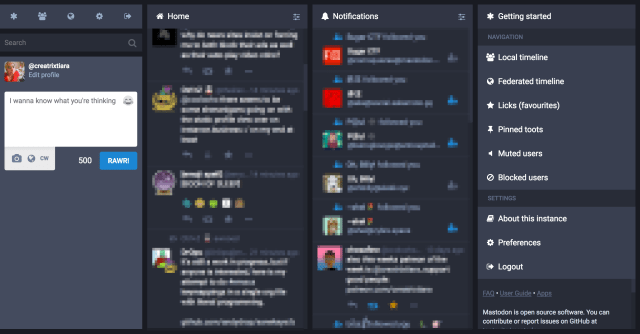 When I asked Mastodon users about their reasons for joining the platform, the vast majority answered: “NO NAZIS”. Indeed, many instances, including mastodon.social, the main Mastodon instance and often the first instance for many users, explicitly ban Nazis and other bigots from their platform. Built-in tools such as content warnings and per-update filtering also give users a sense of control over their content and safety within the community.

The site has had a strong queer and trans presence from the beginning, particularly from those who fled Twitter due to harassment. Many instances are run by queer and trans people, building safer online spaces for people who have faced major problems online for their identity, including very explicit Codes of Conduct. Queer and trans people have also made significant contributions to Mastodon’s code base and development.

That being said, Mastodon isn’t entirely free of problems. Its decentralized nature means that anyone can set up instances — but that means anyone can set up instances, including people with ill intentions. (My first couple of weeks on Mastodon were marked by serious harassment from an instance admin with a significant following in and outside of Mastodon, more so than I had experienced on Twitter.) The Mastodon user base, asides from a number of instances primarily populated with users from Japan or Brazil, can also be overwhelmingly white; this is, thankfully, changing over time as new members come in and Mastodon moderators make a more concerted effort to address diversity within their instances.

My personal experience with Mastodon has been that moderators, developers, and members have been very receptive to feedback, interested in discussions of making Mastodon better, and are also very generous with their time and resources. (In fact, they have been very helpful in developing and editing this article!) Even though people are spread across instances, there’s still a sense of community across Mastodon as a whole, which can be refreshing if you’re tired of just screaming into the void elsewhere.

First, pick an instance. Each instance will have their own style, community, and rules, including restrictions on memberships. Here are some suggestions for instances, based on Mastodon community recommendations:

mastodon.social – Mastodon’s flagship instance and often the first instance many members join. The core developers and community managers of Mastodon are in this instance and are very approachable. Due to its size, sometimes there are temporary shutdowns of registrations; at the time of writing, memberships are still open. 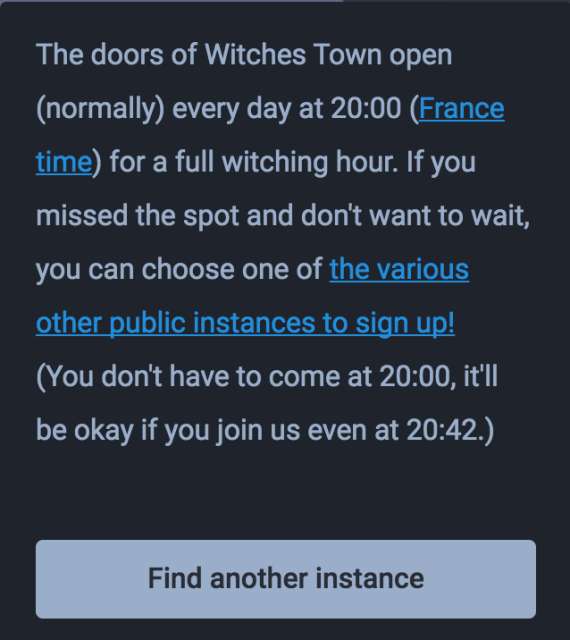 witches.town – based on their About page, they were “made to provide a nice place on Mastodon for queer, feminists, anarchists and stuff as well as their sympathizers.” There’s a significant French-speaking presence though people of all languages are welcome. Registrations are only open for an hour every day at 8pm France time (UTC +1/UTC +2). 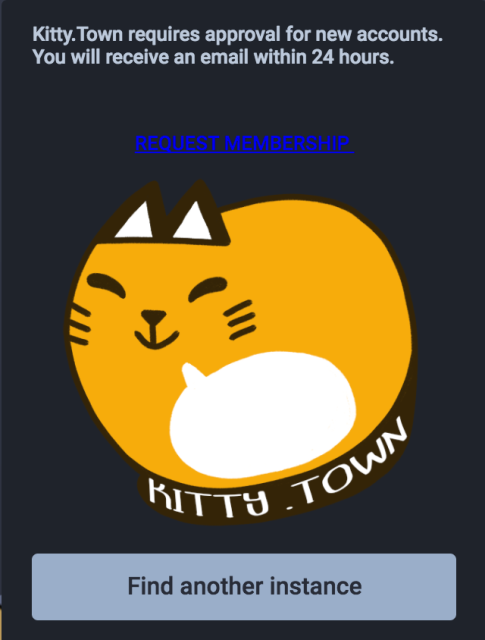 toot.cat – supposedly cat-themed, with a very strong Code of Conduct based on anti-oppressive politics. A similar cat-themed anti-oppressive instance is kitty.town, which requires 24 hours for membership requests to be approved. 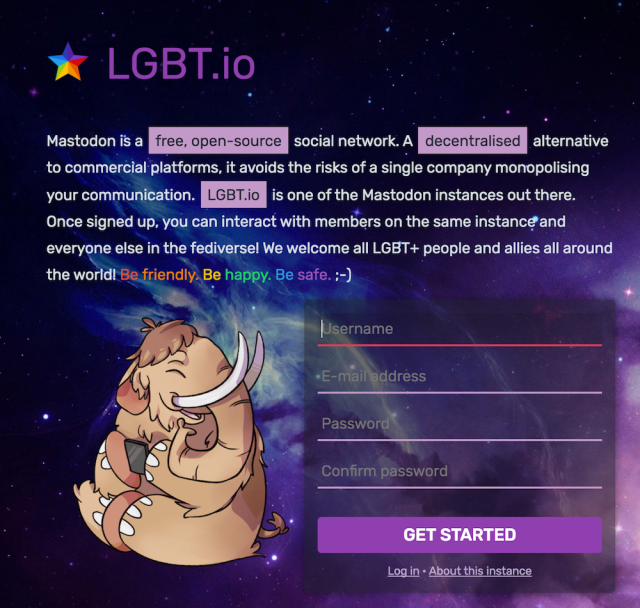 If you’d like more options, check out the instances.social web app, which will suggest instances based on your interests or desired features — or you can just take a look at their lists directly. You can join as many instances as you like!

Just like Twitter, you can make your account public, which means anyone can follow you immediately, or private, which means you need to approve follower requests manually. You can always switch from one mode to another at any time.

Once you sign in to Mastodon you will be shown a screen with a few columns (which you can adjust to your liking).

The left-most column will be where you post your toots, search for users and toots, and pick which column to view:

The Federated Timeline view can be a little complicated to wrap your head around. So when you follow someone, regardless of instance, everyone else in your particular instance can read the toots they made publicly available. It’s a bit like reading a Friends of Friends feed. Not every instance will allow federating (the act of having their members’ toots be available to those on other instances), either because the instance has decided to go private, or because they’ve blocked specific instances.

Your Local Timeline and Federated Timeline are good starting points for finding people to follow. You can also search by hashtag on the search bar in the left-most column, for example #music or #politics. (Right now you can’t search just by text, the same way you would on Twitter.) If you have a Twitter account, you can use this app to find your Twitter friends that are also on Mastodon.

When you wish to post a toot, you have a few options. You can set a privacy setting for each toot:

A very common first toot is an introduction post, using the tag #introductions as well as other tags that reflect your identity or interests. It’s also a good spot to find people to follow and learn more about other Mastodon users.

Some instance moderators have instituted instance-level blocking, which means everyone from any blocked instance will not be able to see or interact with toots from the blocking instance, even if the toot is public or unlisted. This has been very helpful in dealing with hostile instances and moderators. You can also block users on an individual basis.

You can boost other people’s toots, which work like retweeting, or star/like other people’s toots. Right now there isn’t really a way to quote-boost the same way you can quote-tweet, but that could change! Replies work much the same as Twitter, though you don’t need to use the adding-a-full-stop-before-the-at-symbol workaround to have your replies be directly viewable by people who are not specifically being replied to.

You can access Mastodon through any browser, or on various community-developed apps for Android, iOS, Windows, Mac, Linux, and much more. There are also apps to crosspost between Twitter and Mastodon, create bots, and much more.

You can find more information about using Mastodon on the official documentation page or through this 101 guide made by mastodon.social moderator maloki. Feel free to add me — I’m creatrixtiara@vulpine.club!

Creatrix has written 24 articles for us.