“My desire to write is connected with my homosexuality. I need the identity as a weapon, to match the weapon that society has against me. It doesn’t justify my homosexuality. But it would give me — I feel — a license.” – Susan Sontag, Reborn: Journals and Notebooks, 1947-1963 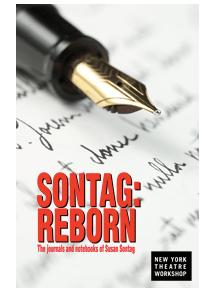 Sontag: Reborn, a play being performed at the New York Theatre Workshop, explores the early life of Sontag through her journals. The play starts with a black and white image of Sontag (portrayed by Moe Angelos) dragging on a cigarette. The lights shift and 16 year old Sontag (also portrayed by Moe Angelos) sits at her desk. The surface of the desk is filmed and projected on the back wall, so the audience can observe the journal writing, listing of books yet to be read, and occasionally the actress laying on the desk in contemplation.

The piece goes on like this with dialogue between the older projected Sontag and the younger Sontag. Journals are written with words that glow onto the back wall and occasionally her words are projected onto the front screen to make the audience feel as if they are sailing through the words in Sontag’s brain. The director Marianne Weems has constructed a show that intertwines elements of live theatre and technology to create a beautiful and unique experience for the audience.

At one point in the show Sontag recalls and recounts when H, her lover at the time, took her to a gay bar in San Francisco in the late 1940’s. The women were dressed in men’s clothes and gender was confusing and exciting for the night. Images of singers are projected in a blurry fashion in front of Angelos as she recounts the tale. She points out on a map the places they went and then how they went back to H’s apartment. The stories told through this play are a fascinating insight into Sontag’s life, as well as queer history.

Sontag: Reborn, based on the books by Susan Sontag and edited by David Rieff, adapted and performed by Moe Angelos, directed by Marianne Weems, and produced in collaboration with The Builders Association is playing through June 30 at New York Theatre Workshop in Manhattan. The show has been in previews and opening night is Thursday, June 6. The theater is located at 79 East 4th Street, between 2nd Avenue and Bowery. You can purchase tickets online for $65. If you are in New York it is definitely worth checking out.