Hey you Straddlers, it’s the MTV Movie Awards! The place where Oscar-winning movies lose year after year after year to Twilight. Is it just me or did I just liveblog these five seconds ago? Nope, that’s just an emotional conflation of liveblogging the 2011 VMAs and recapping the 2011 Teen Choice Awards. Regardless they’re here again, hosted by Russell Brand, and bound to illuminate nothing about movies and everything about the falling standards of young people in America. I’m honestly deeply emotionally conflicted about whether I’m rooting for Harry Potter or the Hunger Games. It’s like choosing between your first love and your current love; they’re both so meaningful, how do you even compare them? 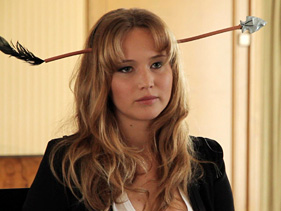 IF ONLY SHE WERE RIDING A HIPPOGRIFF (VIA MTV.COM)

There are a lot of nominees but writing them all out seemed like a waste of everyone’s time, so I made this handy graphic from MTV’s full list of nominees. 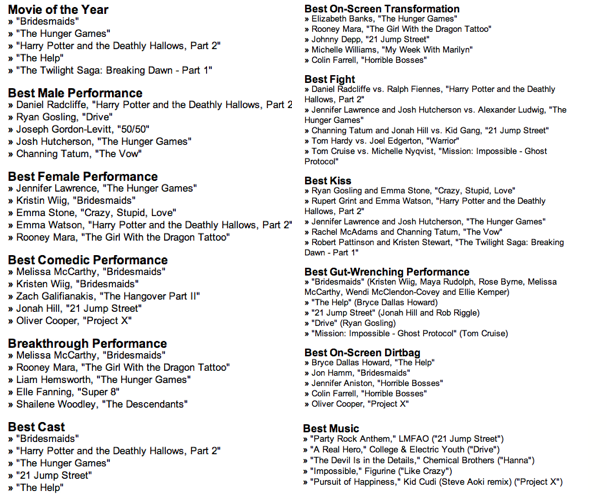 Tonight I’m gathering with a bunch of queermos to watch/drool over the inevitable KStewpalooza, and plan to steal the snarky comments my friends make and claim them as my own here for your reading pleasure! I prepared for this epic night by quitting my job, moving out of my apartment, signing a lease in my new apartment and forgetting to cancel my gym membership. So you know this is going to be good.

Meet me back here at 9pm EST and we’ll all get through this together. Don’t forget to tweet me all of your Harry Potter/Hunger Games/KStew feelings @Ohheyitslizz!

8:50pm: I showed up early for pre-show glamour and Punk’d is on?! Where is the red carpet respect?!

8:55pm: I couldn’t be more excited about this preview for The Perks of Being a Wallflower if I read an instruction manual on how to be excited. I’m calling it, this might be the best part of the night.

9:01pm: Wait. Are the guys from FUN. wearing capri pants? I can’t support this decision.

9:03pm: I love Janelle Monae in a tux and that chorus of women in bow ties. Sigh. 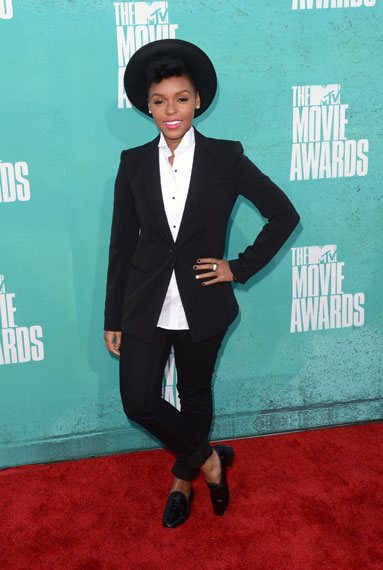 CAN WE BE IN LOVE FOREVER?

9:08pm: Something about the timbre of Russell Brand’s voice makes everything he says sound the same.

9:12pm: I’m bored. This is boring. Will someone make me a cocktail?

9:14pm: Look how uncomfortable Mila Kunis looks next to how drunk Marky Mark is.

I don’t care about this. I forgot to see the movie. I need another cocktail for this.

9:20pm: I just saw a preview for the new movie “Ted” about Mila Kunis and Marky Mark and a magically alive teddy bear. I thought it was an MTV spoof. But no. This is really happening. 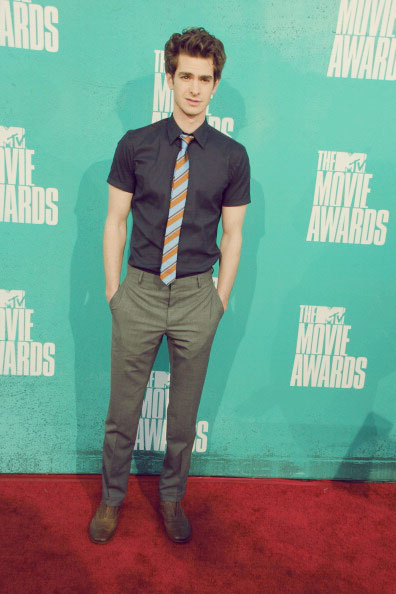 THIS GUY IS YOUR NEW SPIDERMAN

I don’t know who she is but she’s kind of adorable. I like her the most out of everyone so far. Everyone ever.

9:30pm: Emma Watson can do no wrong. I give her permission to do anything. 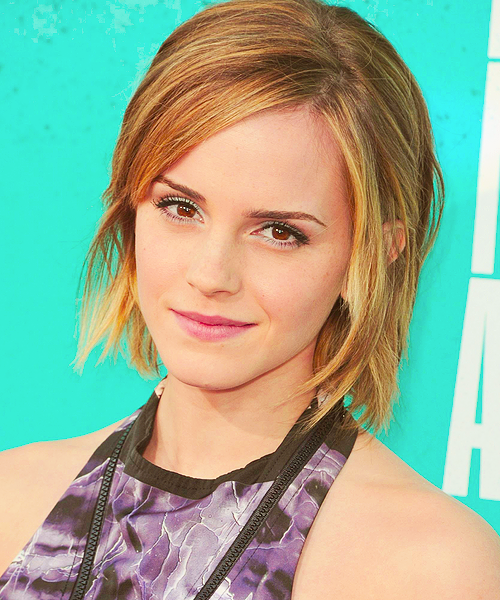 DEAR EMMA WATSON, PICK ME. LOVE ME. CHOOSE ME.

9:32pm: Oh G-d. Best Male Performance. This is our first Harry Potter Hunger Games stand off. I don’t know who to root for. JK this time it’s Harry Potter. 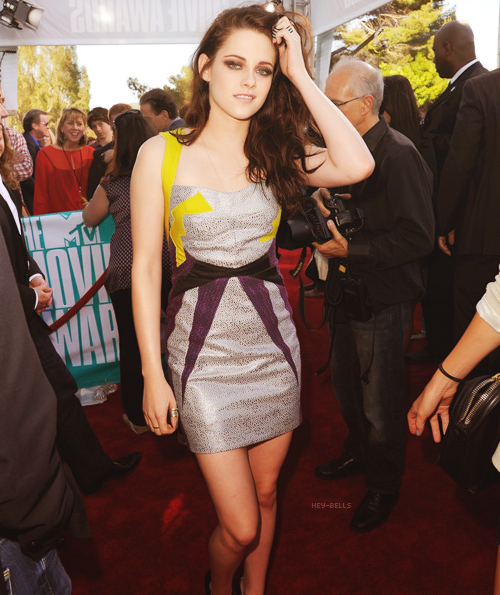 THIS IS ACTUALLY PART OF KSTEW'S ROBOT PURIM COSTUME

Why do I feel like we won a thing?! We won a thing!! Too bad Jen didn’t show up to receive. Somehow that makes her even cooler.

JLaw [looking at the golden popcorn]: I can’t eat this. 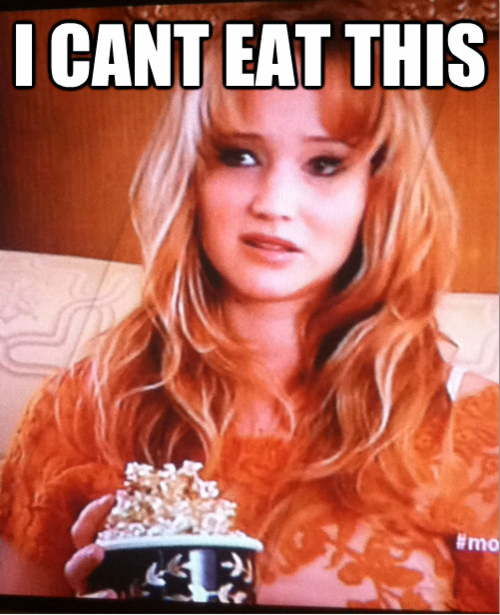 9:44pm: So I guess this is some sort of clip show of party movies? What I’ve gleaned is that cult classic comedies have to star men. All men all the time. Only men are funny. Only.

9:47pm: Can I be honest about how I don’t know who this musical artist is, but am I crazy or is Joan Jett on his shirt?

9:50pm: Liveblogging MTV award shows is really easy since the show is 90% commercials.

9:55pm: Leighton Meester is presenting best kiss. I think the real question is why isn’t she nominated for any kiss ever? 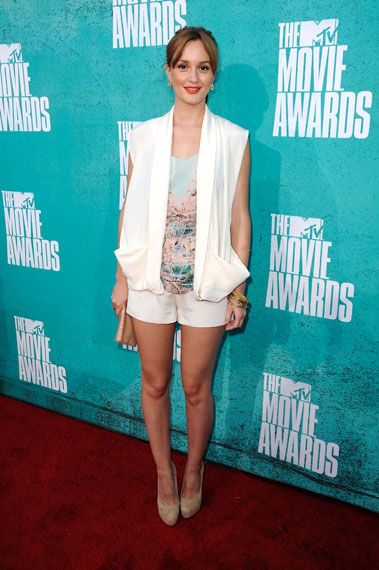 Also if Hermione/Ron don’t win this shit is rigged.

Boooo. But wait. Who is that white T-shirt lezzie looking girl KStew is sitting with? And no RPat? Okay for those of you playing at home who can’t see this, KStew just tried to get someone, anyone to come on stage and kiss her. Including but not limited to super homoerotic call out to Charlize Theron. KStew, why didn’t you just call up the hot chick you were sitting with?!

10:04pm: Awesome. Two old men to present an achievement award (“The Generation Award”) to Johnny Depp. I totally appreciate and love Johnny Depp but there hasn’t been a single gay on stage yet. Didn’t the producers of this see the Emmys? Gay sells people.

Also this is tragically boring.

10:08pm: So Johnny Depp is playing the guitar with the Black Keys. Reactions from around the room:

My Friend: Johnny Depp was cool, he just got so much cooler
Me: Are you kidding? He’s playing guitar at the MTV Movie awards. He just got 100% lamer.
My Friend: Well… he’s only lamer if he tries to launch a full music career after this.

10:20pm: Joel McHale is so fucking hilarious. Also a fake archery instructor is a stupidly funny concept. That was the funniest thing of the evening. That’s really unfortunate. Why is Community being canceled? Whyyyy?

There is not enough booze in the world to make me care about this category.

This is correct! Go team! Only Emma Watson bothered to show up! Womp Womp. Just in case anyone is curious, she goes to Brown where I am going in the fall. I think we all know what’s going to happen when we meet. Love forever. That’s what.

I love Elizabeth Banks. We have the same name. Also her outfit looks like what a spider wears after it gets magically turned in to a woman. 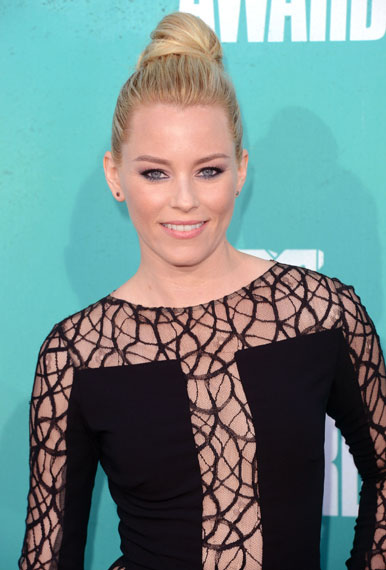 10:40pm: So Emma Stone is getting The Trailblazer Award? I think it’s a joke but I also don’t understand if maybe this is a joke. I do love a good montage though.

My Friend: Wait. Oh. For that whole time I thought they were talking about Emma Watson.

10:44pm: Okay even post-acceptance speech I have no clue what this award is for. Is this because of The Help? Is this because of Spiderman? Does Emma Stone go around the country giving emotionally inspiring speeches to high school students?

10:47pm: Okay so a preview for Channing Tatum’s new movie where he plays a male stripper just came on and now I understand that man-stripper joke before. Sorry guys, I’m just trying to stay on top of everything.

10:49pm: Joseph Gordon Levitt dresses the way I wish all hot butch chicks dressed. All of them. Love his red watch.

10:50pm: Seriously though, I don’t think I can move on from Joseph Gordon Levitt’s outfit. That’s what everyone should wear to weddings this summer.

10:52pm: Yeah I’m still not over it. With the red button? With the corresponding but not too matchy tie? This is a win guys.

10:53pm: I was so distracted by Joseph Gordon Levitt’s outfit that I forgot to point out how fucking weird this whole Batman END OF THE STORY worship thing is. I mean, it’s Batman not Harry Potter — it doesn’t actually ever end.

I mean, I’m not arguing with exclusive footage, I just didn’t realize this movie series was such a bit deal. I mean I love these movies but I’m a giant nerd-face.

11:02pm: Finally! A gay on stage! Jodie Foster! Her jacket looks like a futuristic motocross situation?

Movie of the Year is Twilight Breaking Dawn Part 1

11:05pm: MTV should go back to the days when they used to stage controversies. It was actually somehow more entertaining.