Hello, beautiful creatures! Last year we didn’t even do a real liveblog of the VMAs because it seemed unlikely that Kanye was going to show up Taylor Swift again. But this year I’ve volunteered to carry the torch, even though I know little about music beyond, “Like Lady Gaga is good and stuff.” Oh well, onward and upward!

This whole week I’ve been tirelessly planning. Unfortunately, that planning was geared towards the impending Hurricane Irene and I don’t think my viewing of the VMAs is going to be much helped by five gallons of water or sixteen cans of tuna. I didn’t liveblog the first half hour of the pre-show because I was recovering from said hurricane and also I didn’t want to. 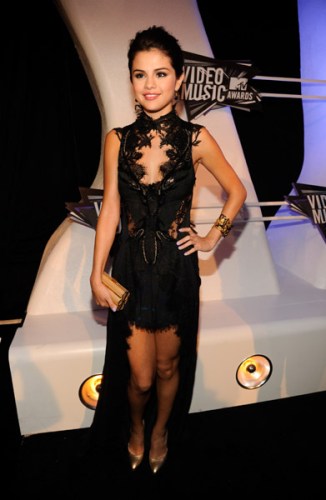 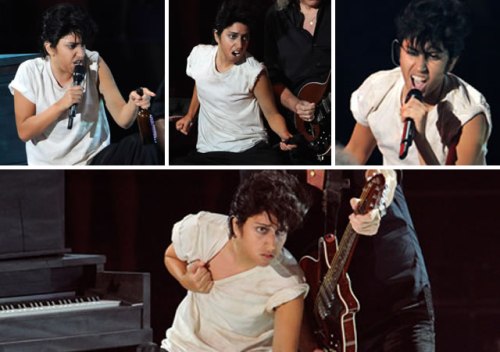 9:08pm EST: Did Jo/Gaga just fall? I think so since they sort of cut away as she fumbled.

9:12pm EST: I guess Kevin Hart is not hosting but introducing the show. He’s super upset about it.

9:14pm EST: Nicki Minaj and Jonah Hill presented Best Pop Video. Nicki Minaj is dressed like the 80s. The entire decade. All of it. Is that an inflatable animal on her head? 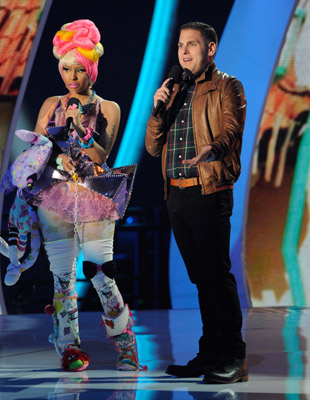 LOOK HOW SKINNY JONAH GOT 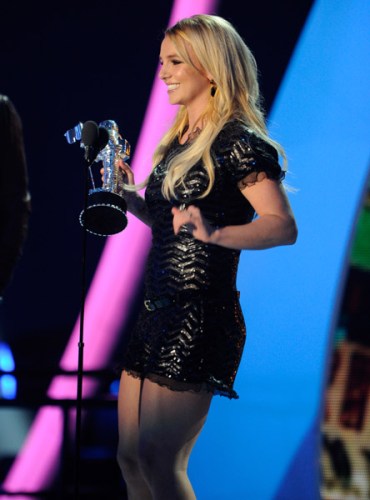 9:16pm EST: Briney Spears loves someone named “Jason.” I think we can all assume that Adele is pisssssed. 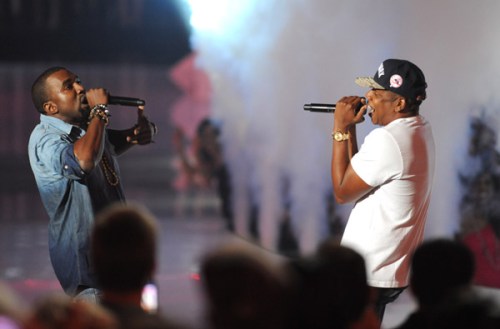 9:30pm EST: Miley Cyrus and Sean White are presenting for Best Rock Video. This combination is perfect if you’re me/any other girl who loves Disney and snowboarding ages 15-25. 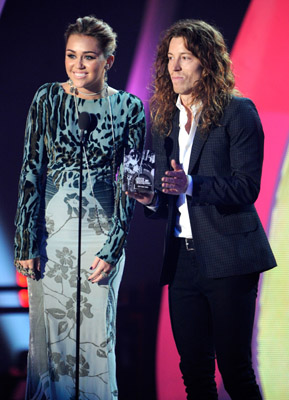 SOMETHING HERE IS JUST NOT RIGHT 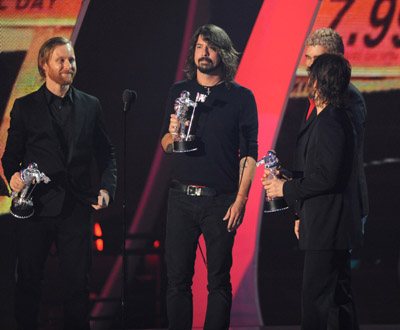 9:35pm EST: Why are Jack Black, Will Ferrel and Seth Rogan pretending to be future beastie boys? I’m confused by lame jokes. 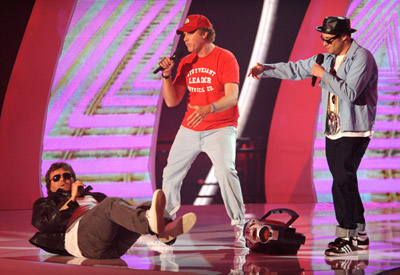 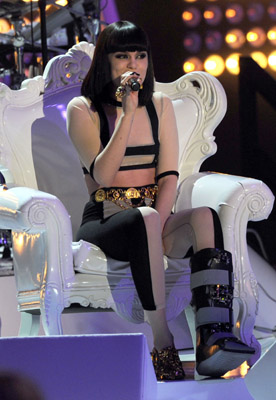 JESSIE J IS THE HOUSE BAND OR SOMETHING

9:40pm EST:
My Roommate: Is that stuffed animal her purse? How is she sitting in that? Oh it’s so short.
Me: Her ass is just on the seat.

9:44pm EST:I love Demi Lovato. I loved Trouty Lips until he decided to leave Glee. Dude: career mistake. They’re presenting for Best Collaboration. How is this even a category? 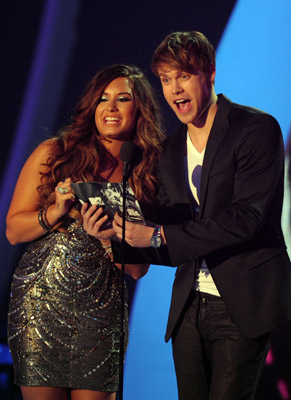 THIS IS NOT EITHER OF THEIR FINEST MOMENTS 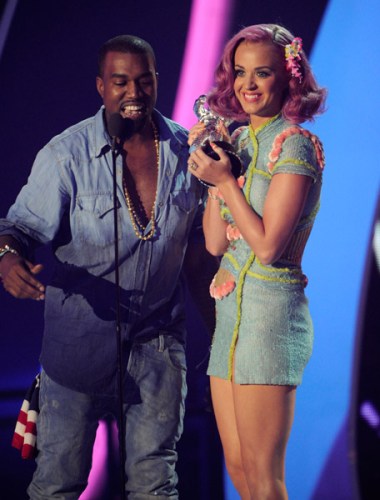 9:49pm EST:Holy shit. That’s what Pitbull looks like? I just got blindsided. He makes a lot of claims in his song I suspect are not entirely accurate. 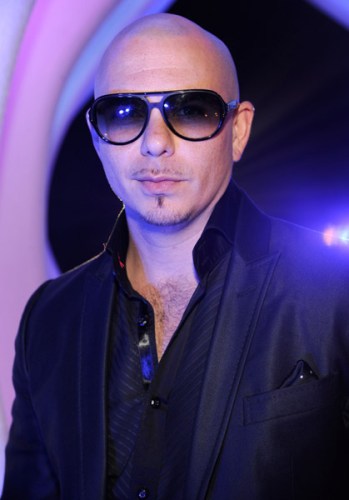 9:52pm EST:Jessie J’s purpose in the VMAs is still unclear to me beyond her (currently) being the gayest part of the show.

9:58pm EST:Oh. More Katy Perry. Wait. Yay! Adele performing. I’m only 2 days younger than her but somehow I still want to grow up to be her. 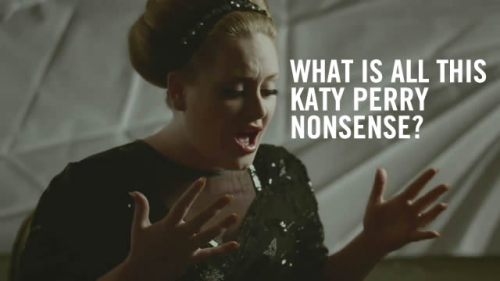 10:09pm EST: Beavis and Butthead and Nicki Minaj what?

10:10pm EST:
My Roommate: Did Jessie J bedazzle her cast?

10:11pm EST: THANK GOD BIEBER FINALLY WON AN AWARD.
Seriously guys I swear he’s trying to look like a lesbian. An adorable butchy hipster lesbian. I want to marry her. 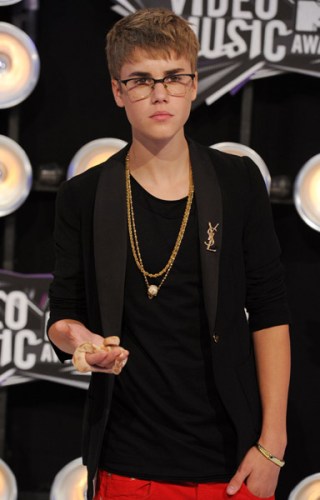 My Roommate: Check out his Yves Saint Lawrence pin. It just looks like an old lady’s broach.

10:13pm EST: Why is Chris Brown on TV? I thought we all unilaterally decided we fucking hated him? But wow. Look at his brooch. Putting the Bro in Brooch. 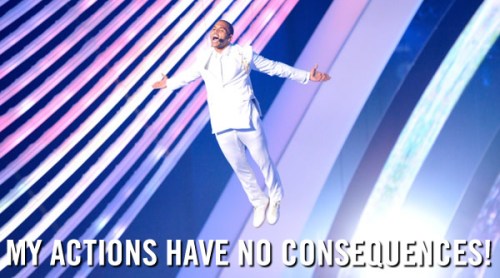 10:16pm EST: OMG Chris Brown is flying! Who allowed this to happen? Someone call NASA.

10:18pm EST: Ouch. Jessie J is sort of butchering No Scrubs. Still funny that she sang it after Chris Brown’s performance. 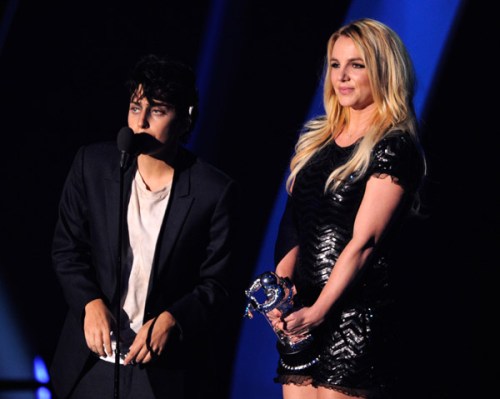 10:31pm EST: It’s a good thing Beyonce is performing something in sequined blazers. Am I supposed to know this song? Does Beyonce have a wind machine or did she just learn to flex her hair? 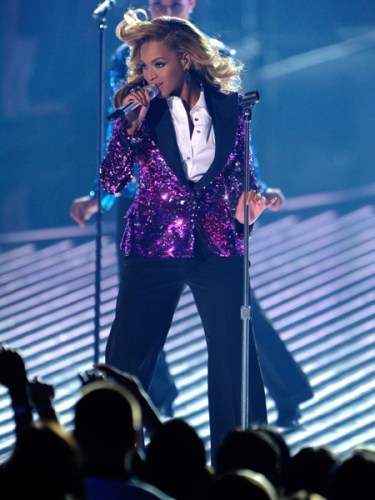 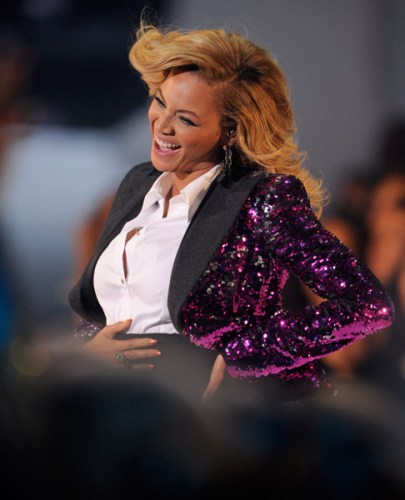 Lizz: How cute was that belly rub?
Intern Grace: so cute!

10:40pm EST: Justin Bieber’s girlfriend and a werewolf are presenting for best new artist. Which is funny because they’re both new artists. Well, not the wolf. 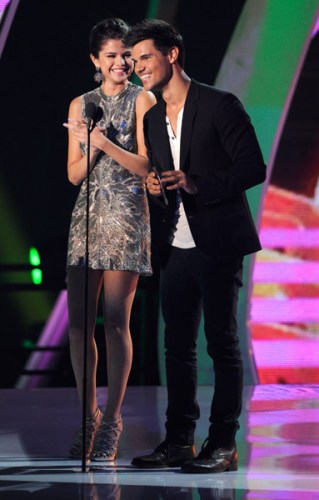 BIEBER IS SO JELOUS RIGHT NOW

10:42pm EST: This guy is so new I’ve never heard of him. Also, his speech has so many swears I can’t even follow it. I think his speech went something like this:

Okay all you fucking goddamn fucker shitty ass stupid mother fucking kids. Even you can pull this goddamn shit fucking shit off. You can fuck all those mother fuckers and do this shit.

Something like that. But censored it was just “You kids can do this too.”

10:45pm EST: I’ve just been informed that Autostraddle gives a fuck about Tyler the Creator.

This is Tyler’s mom.

10:46pm EST: Did anyone just see that Young the Giant crowd surf fail? 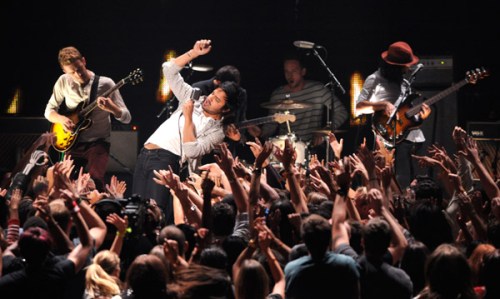 10:50pm EST:I’m getting bored. Why aren’t there more gays on MTV? Between Jessie J, Lady Gaga and Justin Biber we only have like one and a quarter lesbians at this show.

10:55pm EST: The old lady from Beerfest (Cloris Leachman) just made 1000 hilarious jokes (including saying DTF) and Snooki made one that didn’t land. Ha. 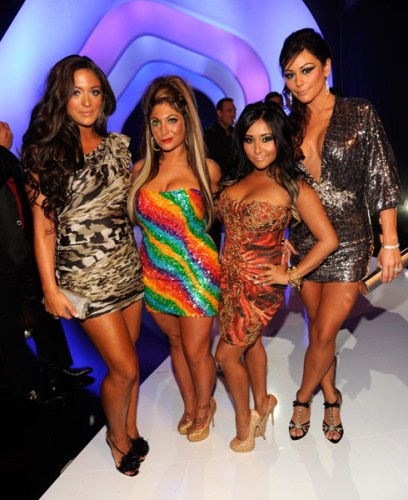 10:59pm EST:I guess I sort of take back what I said about MTV and gay people. But let me just say that Beyonce had the best video of the year. 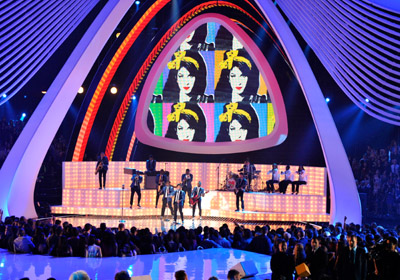 11:08pm EST:Tony Bennett’s outfit in the recording studio is the same as the one he’s wearing at the VMAs. Why does Tony Bennett only have one outfit? 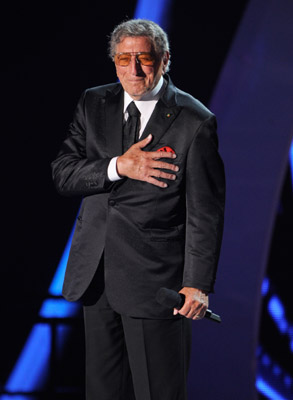 My RoommmateBecause he’s Tony Fucking Bennett. That’s what he wears to bed.

11:10pm EST: Congratulations Bruno Mars. You just joined the “dudes who look like lesbians” club. Justin Bieber will teach you the secret handshake and Conan will show you where to get your ID badge. 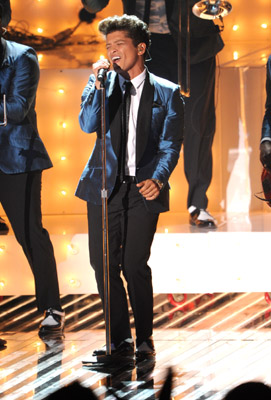 WHO'S MAKING THE TUMBLR?

11:18pm EST:I don’t know what the Hunger Games is about but I think I need to see it.

11:19pm EST:Katie Holmes? She has nothing to do with the music industry… 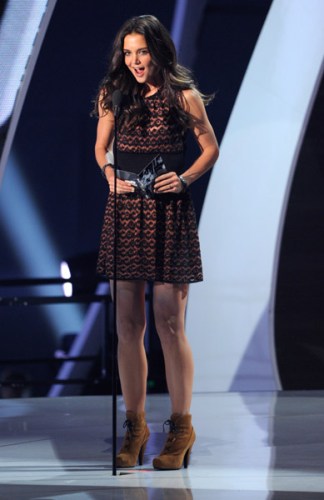 YOU SHOULDN'T BE HERE 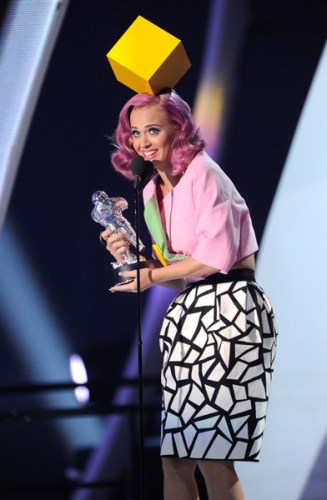 11:27pm EST: I guess Lil Wayne is closing this shindig out. 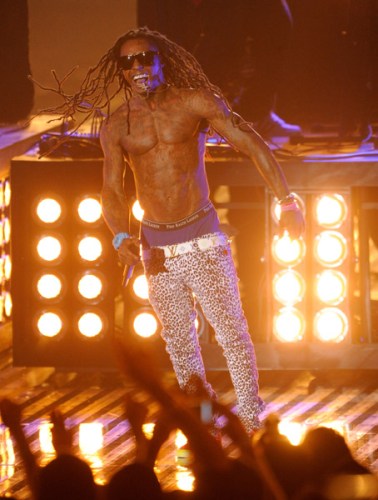 His last song rivals Tyler, the Creator in incoherence in terms of censoring.
Until I can get an actual clip of that performance:

11:35pm EST: Wait. It’s over? I watched like five minutes of MTV’s new show I Just Want My Pants Back thinking it was a commercial.

I guess that’s it. Seriously? That’s why I got dressed up all fancy? Well, here it is, the only reason you watched. 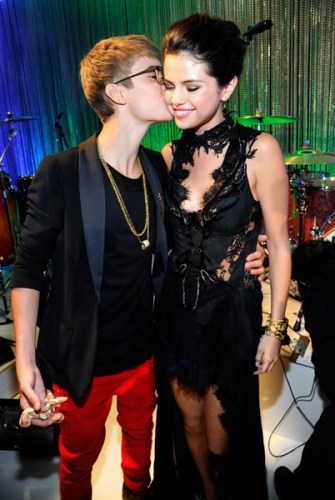