Tyler the Creator is taking over. His new album, Goblin has been called “one of the best rap albums ever made and he’s praised for being “preternaturally talented, honest, witty, smart,” but Sara Quin of Tegan & Sara has some choice words for the 20-year-old rapper:

“As journalists and colleagues defend, excuse and congratulate ‘Tyler, the Creator,’ I find it impossible not to comment. In any other industry would I be expected to tolerate, overlook and find deeper meaning in this kid’s sickening rhetoric? Why should I care about this music or its “brilliance” when the message is so repulsive and irresponsible? There is much that upsets me in this world, and this certainly isn’t the first time I’ve drafted an open letter or complaint, but in the past I’ve found an opinion – some like-minded commentary – that let me rest assured that my outrage, my voice, had been accounted for. Not this time.”

Notorious for his shocking lyrics, Tyler takes not giving a fuck to a whole new level. Actually, he gives a lot of them in the sense that “fuck” appears to be his favorite word. Here you go, I made a word cloud for you of his twitter feed for the month of May so that you can observe his genius. 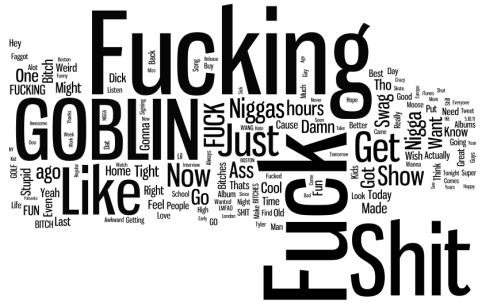 His songs are more than just dirty words being thrown around, though. One look at his lyrics makes it easy to see what pushed Sara over the edge. They span from terrifying and  misogynistic (I just wanna drag your lifeless body to the forest/And fornicate with it but that’s because I’m in love with you, cunt) to violent and immature (Kill people, burn shit, fuck school/Odd Future here to steer you to what the fuck’s cool/Fuck rules, skate life, rape, write, repeat twice) which, in truth, isn’t much of a range.

Tyler’s central motif is opposition. Though reviews have cited similarities between Tyler and Tupac or Odd Future (his collective) and groups like the Wu-Tang Clan, these comparisons are more hollow praise than meaningful observation. While those artists wanted to narrate and expose their gritty inner-city reality, Tyler’s negative energy is his alone, simultaneously directed at everyone and no one in particular. The Insane Clown Posse with their loyal band of juggalos emerge as a more apt comparison.

While Tupac had crack-era racial politics impacting his daily life, Tyler’s anger seems to stem from his father’s abandonment. Though experiencing pain from a personal tragedy rather than on communal level certainly doesn’t make an experience any less valid, it might be worth questioning when the therapeutic value of music becomes outweighed by its hateful ethos. Rather than discuss his reality, Tyler emphasizes the authenticity of his music by drawing attention to its emotion; “I usually just say what I’m feeling at the time, what I think is cool.“

Spontaneity is neat, but a little self-reflexivity never hurt anyone. Especially when the product of your whims is projected to sell 45,000 copies during the first week of its release. Tyler the Creator is far from the first artist to use homophobic or misogynistic slurs in his music but, as Sara mentions, perhaps his accessibility has made the problem that much more conspicuous.

We at Autostraddle are big fans of Moff’s Law and are used to having someone telling us to stop caring so much, but it’s particularly weird to see an artist actively discourage discussion about their music. Syd da Kyd, Odd Future’s sound engineer, happens to be gay and a women and doesn’t seem to have a problem with the music either. “When I first started really fucking with Odd Future heavy, my dad was like, ‘Really? They talk about some crazy shit and as a female, you’re slapping a lot of women in the face.’ I’m like, ‘That’s what I do. I slap bitches.'” Tyler’s horror-soaked songs are aimed to attract and alienate and apparently, as long as she’s included in the party, everything’s alright. 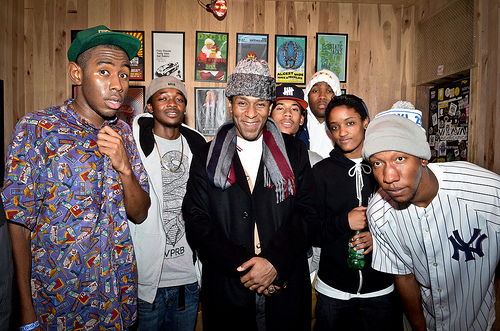 Odd Future including Syd the Kid, an out lesbian

But being shut out is exactly where thousands of women and gay people, not to mention people of color, religious minorities, and people with disabilities find themselves. Sara acknowledges the uncomfortable position you take on when you stand up for something that you believe is right:

“The inevitable claim that detractors are being racist, or the brush-off that not “getting it” would indicate that you’re “old” (or a faggot)? Because, the more I think about it, the more I think people don’t actually want to go up against this particular bully because he’s popular. Who sticks up for women and gay people now? It seems entirely uncool to do so in the indie rock world, and I’ll argue that point with ANYONE.”

So let’s not let her invitation to discussion go by unnoticed, let’s argue. How much do words matter?