Previously on Supergirl, we had 100 episodes of Kara Zor El saving the world. 100 episodes of laughter and hope and tears and frustrations and more hope. 100 whole episodes, and still plenty more to come. But I’m getting ahead of myself.

Last we left Kara Danvers, she had wished she had done something different so that Lena didn’t hate her, and her and Alex had opened the door to find Mr. Mxyzptlk standing there.

Mr. Mxyzptlk explains that he’s here on an apology tour of sorts; he got in a bit of trouble after the last time he stirred things up in National City, and can only use his powers to help those he’s wronged now. Alex feels no sympathy for him. 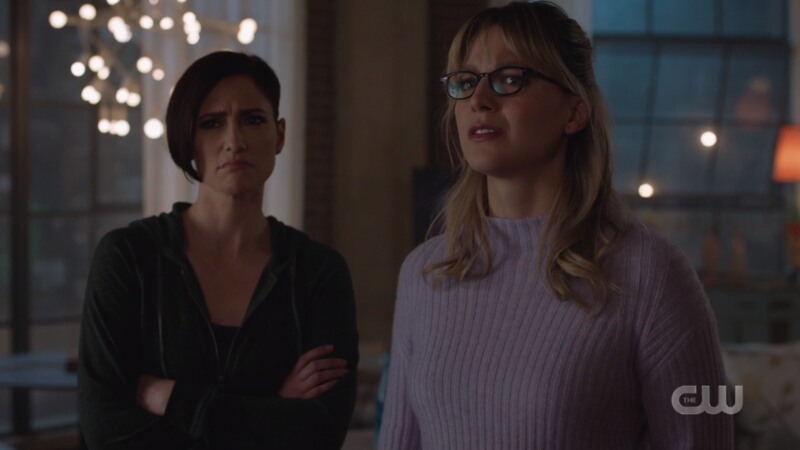 Kara asks how he intends to help her, and so to remind her of the part of her that hurts the most, he uses his magic to put a clip of Lena yelling at her in the Fortress of Solitude on the TV. He says he can give Kara a do-over, to go back in time and tell Lena she’s Supergirl in a better way, at a better time. To see what the world would look like if she could choose what happened.

As a show of good faith, he gives her a tape recorder with his name said backwards on it so she could always send him back to the Fifth Dimension. Which Kara, hilariously, immediately takes advantage of. All that’s left when Mr. Mxyzptlk blinks away is Lena on the TV saying the line that stabbed us all deep in our heart places, “I’m not a villain. You shouldn’t have treated me like one.”

Then J’onn comes in, confused as to why his girls look so… shook. 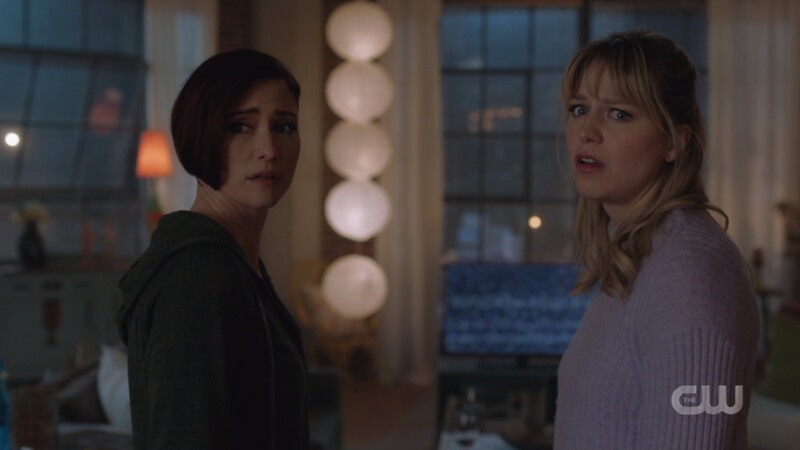 After they explain the Mr. Mxyzptlk situation to J’onn, Kara reveals that she is tempted by this offer. Alex is like, “You’re still trying to call this a friendship? Even though you literally want to change the course of history for it? Sure, Jan.” But Kara doesn’t want to be on the opposite side of the line from Lena. Because she doesn’t know if she has it in her to do what it would take to stop her. Just as Alex and Kara decide maybe they could consider Mxy’s offer, Mr. Mxyzptlk crawls out of the fridge. He sends Alex and J’onn into a magical paintball game, and he and Kara start their journey.

Mr. Mxyzptlk says that the deal is, they’ll go back to an important moment, Kara will change it, they’ll pop back to present day to see what changed, then Kara can decide whether or not she wants to keep the new reality.

So they start to scan Kara’s life to see where in their three years of friendship, Kara got it wrong with Lena. 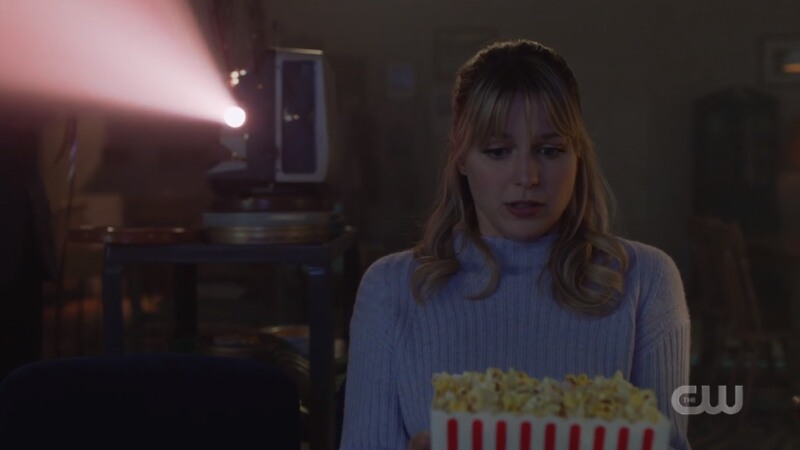 Mr. Mxyzptlk shows Kara the scene on the airplane, where Lena bravely said she’d land the plane and Kara faked being knocked out and Kara is horrified. “This is awful,” she says. “I’m awful.” And while “awful” isn’t the word I’d use, I think this is good for Kara to think about. How many specific times Lena is probably going back through, having to reframe their entire relationship, every single interaction they ever had.

Kara asks Mr. Mxyzptlk to take her back to right before Mercy attacks. 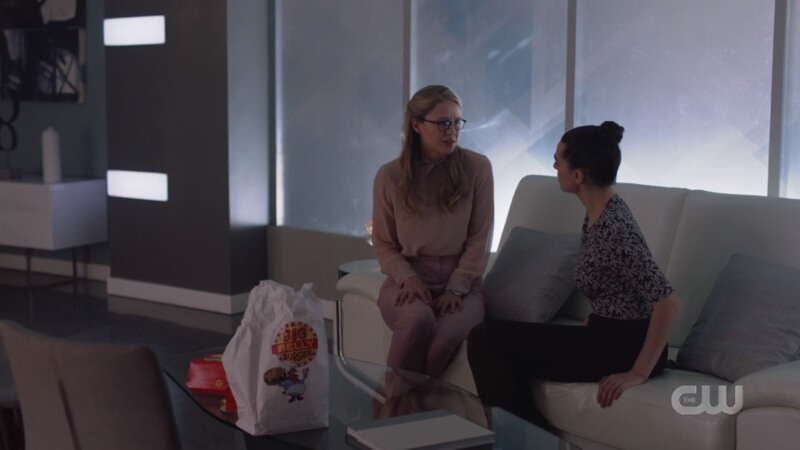 Oh to be able to go back and see how my life would play out if I came out earlier.

So Kara is zipped into Lena’s office, right before they’re about to share some Big Belly Burger. And Kara comes out to Lena as Supergirl. It’s gentle, kind, and quiet. She frames it with understanding and apology, and Lena is just… stunned. 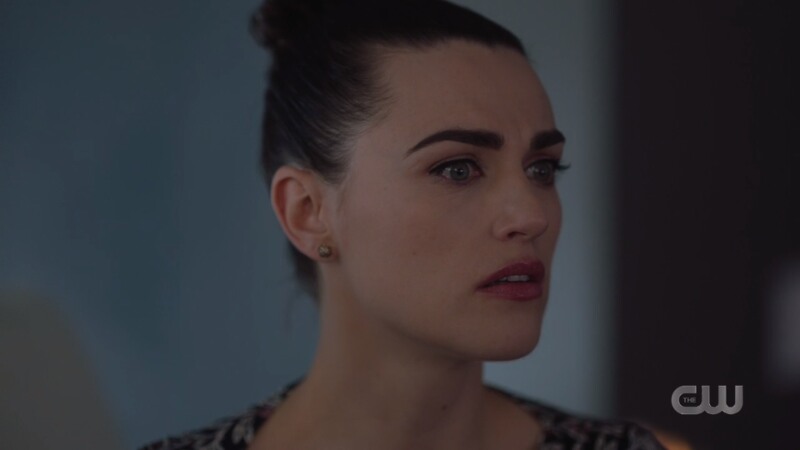 “…I really thought she was going to tell me she has feelings for me for a second there.”

Kara hears Mercy attack the building so she zips out to take care of it, but when she gets back, Lena is gone.

Kara goes back to Mr. Mxyzptlk to figure out what happened, and Mxy shows her that Lena went to find Sam to tell her Kara was Supergirl. Something tells me that Lena wouldn’t go telling Kara’s biggest secret to the first person she could, but also I wasn’t mad about seeing Sam again. Lena tells Sam that she’s thinking back to when she used kryptonite to split Reign and Sam, and remembers how mad Supergirl was. Knowing now that it was actually her best friend with that much rage has her in her feelings. She says if Kara, the kindest, most forgiving, most hopeful person she knows saw her as a villain… maybe she is one? Sam stops her right there. Lena did what she had to to save Sam. She’s a hero. 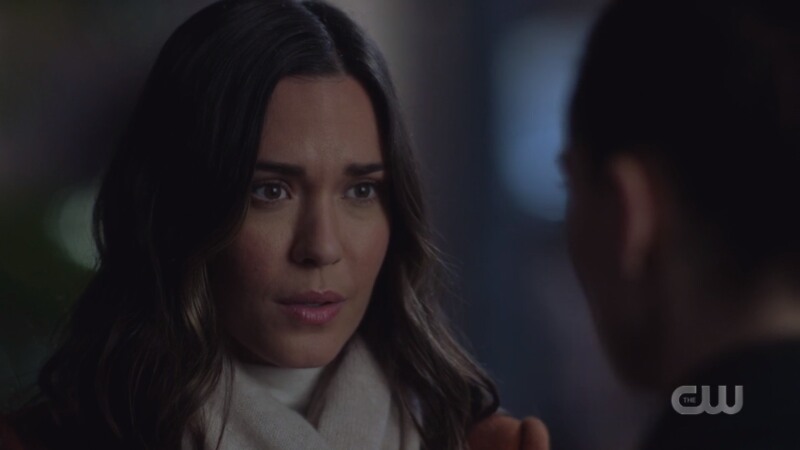 I wish Sam would come back for real. I feel like Lena could use her friendship right now.

At first Kara thinks maybe this is a reality she can work with, but then it starts raining Kryptonite. Kara is sure that, even hurt, Lena will still save her like she did in the real timeline. Mxy says she would, if she could, it’s true… but she’s too far away. And Kara Zor-El dies. And I guess that’s not 100% enough to convince Kara to undo this scenario, but what is MORE than enough for all of us is Alex crying at Kara’s grave, saying she’s so lost without her. No. thank. you.

So Kara decides to go back even further. Lena mentioned the fight that she and Supergirl had about Kryptonite, so Kara decides maybe going back to that point might be the right spot. But first they take a pit stop in the scene where Kara asks James to see if Lena has any more kryptonite, and Kara winces; she sees now that she shouldn’t have done that.

Kara gets plopped back into the moment when Supergirl confronts Lena about kryptonite. She takes the moment to tell Lena that she is Kara, that Supergirl is Kara, Kara is Supergirl. This is why she’s so upset about Lena having kryptonite. But this doesn’t turn out to be the right time either, because all Lena can think about is how she could have used Supergirl’s help saving Sam. And Kara butts up against the same problem as before; Lena feels like she can’t trust someone who has lied to her so many times over the course of their friendship. 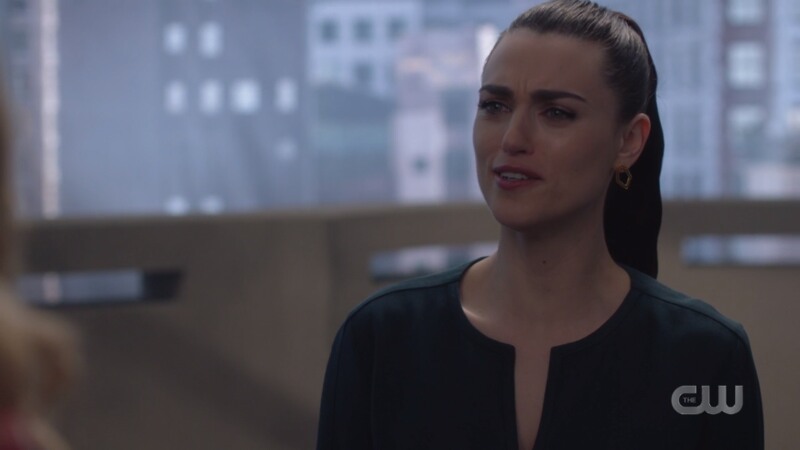 I honestly don’t know if it’s better or worse that the writers know how many times things would have gone better if Lena knew Kara was Supergirl.

Kara is frustrated but she still thinks this timeline is salvageable; she asks to go to the time she went to Sam’s mom’s house since in this timeline, Mon-El is there, to try to get his perspective. Mxy hilariously says he doesn’t know what Kara saw in him, which is the kind of meta self-burn I’m here for. 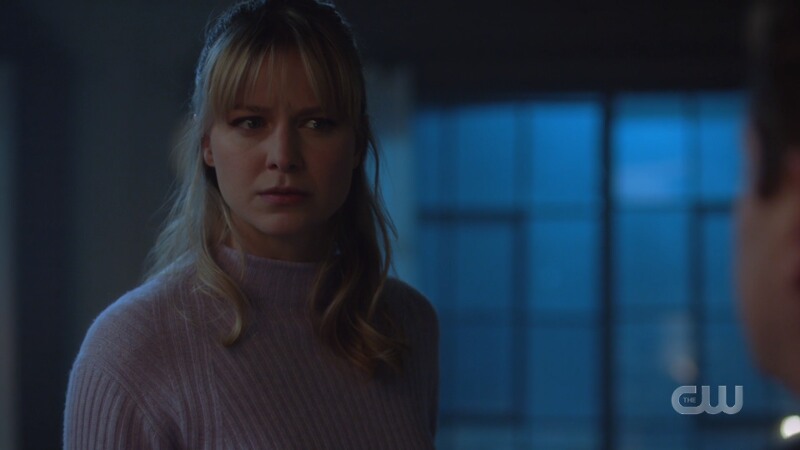 “Yeah, yeah, I’ve heard all the white bread jokes. We all make mistakes.”

And I don’t know if distance makes the heart grow fonder, or my love for Chris Wood has eclipsed my hatred for the Daxamite, or if they wrote him to be the best version of Mon-El, but I didn’t hate this scene. Mon-El points out to Kara that everyone else in Lena’s life who lied to her was doing it to manipulate or use her, but she was doing it to protect her; he’s sure, in time, Lena will see the difference.

He then says something I think we all could stand to hear: “You deserve the same compassion you show others.”

Reign shows up to fight and Lena shows up just in time. Kara is so happy to see her, and Lena blasts Reign with something, bringing Sam out, and proudly telling Kara she did it without using kryptonite. 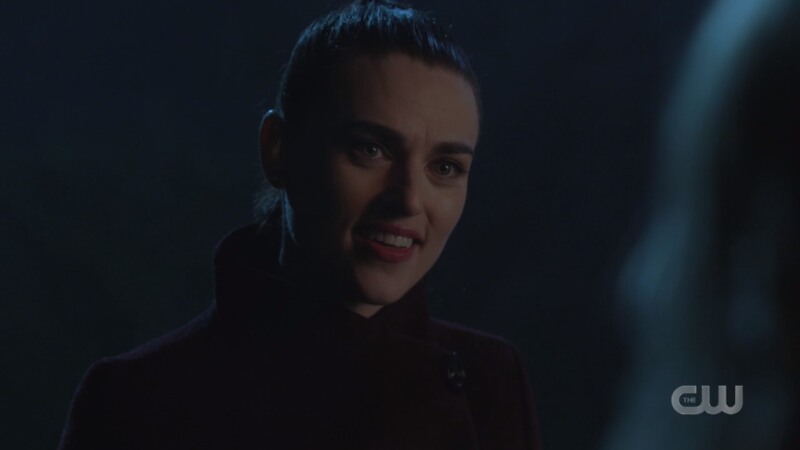 Look how proud she is! Cleverest witch of her age.

And just when we think we’re going to get the perfect timeline we deserve, Reign takes back over and kills Lena; by the time Mon-El and Sam die, Kara is in a full panic, begging for Mxy to take her out of this nightmare. 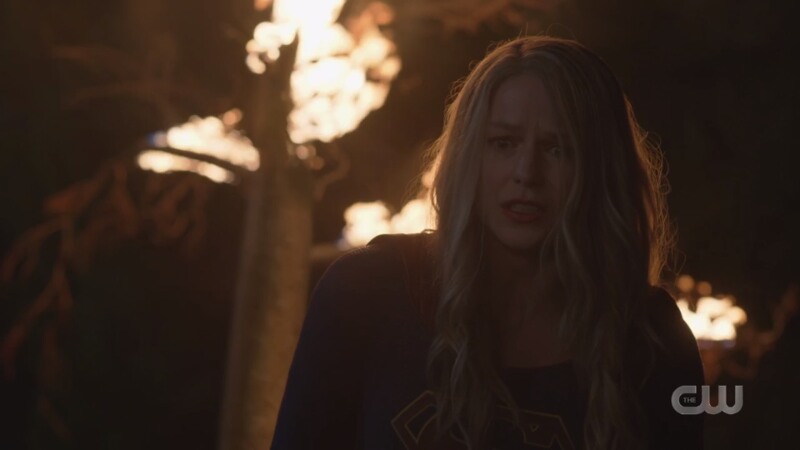 “Please, Mxy, the wigs alone are too much to bear.”

And one thing this episode is teaching us, beyond the importance of Kara and Lena’s friendship, is just how many times Lena saved the whole goddamned day.

Anyway, Kara decides to go all the way back, to the moment they took that first step down the path to friendship, which also happens to be the moment Lena said she wasn’t interested in any kind of friendship.

Kara takes this moment to fly out of Lena’s office and back, and tell her that she’s Supergirl. Lena is taken aback to say the least.

She says, “Kara Danvers is Supergirl,” with an almost awestruck wonder, and Kara realizes she’s not mad. Lena says of course she’s not mad. She calls Kara incredible and asks why she’s trusting her with such a big secret. Kara says what she’s been trying to tell Lena in every timeline: Lena is good, and Kara trusts in that. Kara says that her cousin and Lena’s brother had it all wrong, and that they have the chance to redefine what a Super and Luthor can do together. Says they shouldn’t be enemies, but partners. 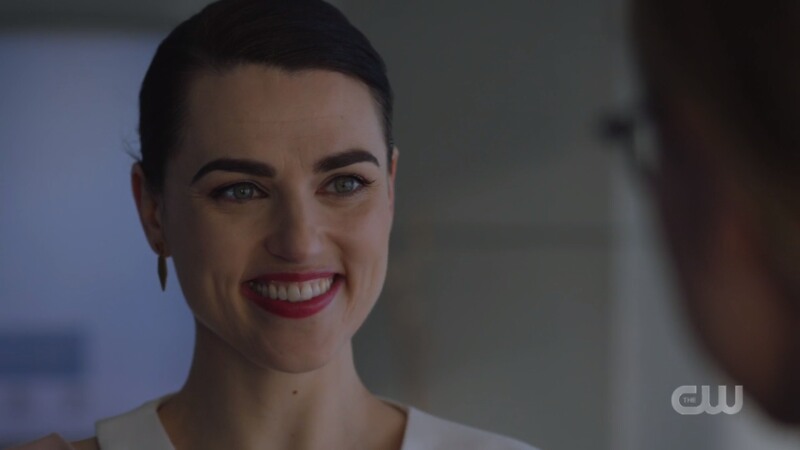 “We could be heroes, forever and ever.”

We flash through three years of headlines, of Lena and Supergirl being an unstoppable duo. Lena is even testifying at Lillian’s trial, and pleads the fifth under oath when asked about Supergirl’s true identity. 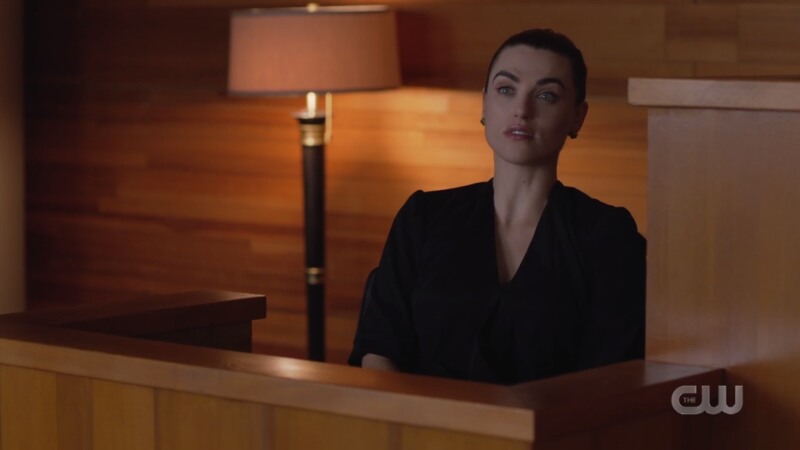 “I did not have sexual relations with that woman.”

Kara fucking loves this timeline. It’s a world where she does no harm to Lena, and where everyone sees Lena as the hero Kara has always seen. 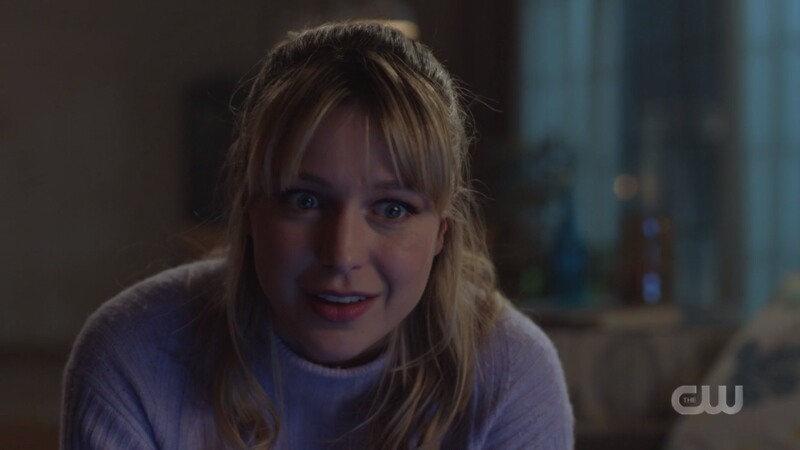 Me watching Supergirl 75% of the time.

But of course, this is all too good to be true, and toxic masculinity ruins the party again. Ben Lockwood approaches Lena on the street; in this universe, Byron Montgomery’s Kryptonian Cult, the Church of Rao, has gotten out of hand, and Ben’s family jumped off the roof to their deaths, thinking Supergirl would save them. Ben demands to know who Supergirl is, thinking if they knew she was just a person like everyone else, they would stop worshiping her, but Lena refuses. As thanks for her loyalty, she is kidnapped. 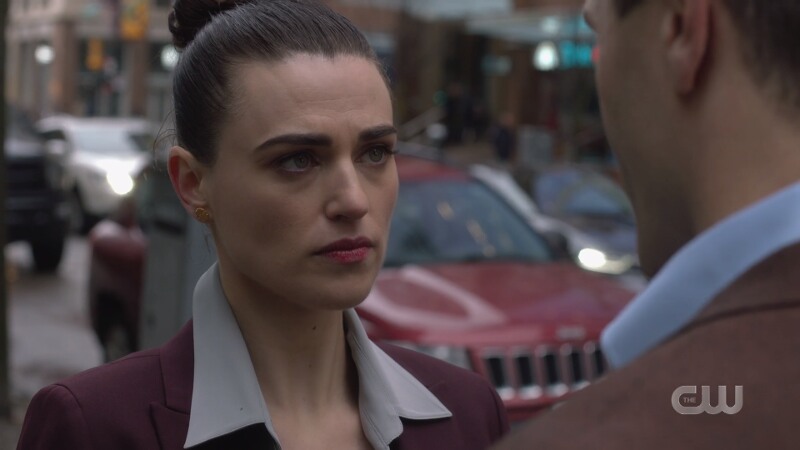 Ben records his manifesto, telling Supergirl to reveal her identity or he’ll kill Lena and Chad Lowe. Even though she’s tied to a death trap, Lena shouts, “Supergirl, don’t do it,” brave til the end. 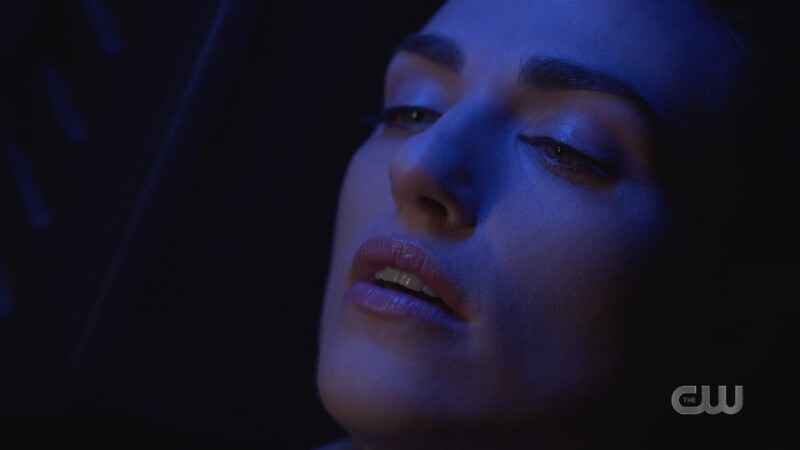 Also beautiful til the end.

And Kara reveals a devastating truth that seems so obvious now that she’s said it out loud but that I never really thought about; Kara wakes up every single morning afraid that this will be the day her being Supergirl will get someone she loves killed. And now she’s faced with her biggest fear coming true; the person she loves third on this planet (only coming after her Earth Mother and sister) is in danger just for knowing her.

Valerie has written 232 articles for us.