Winn reassures her that she taught them how to take care of themselves, that they all stand by her side knowing the risks, so she goes to a press conference and comes out as Supergirl to save her gal pal. 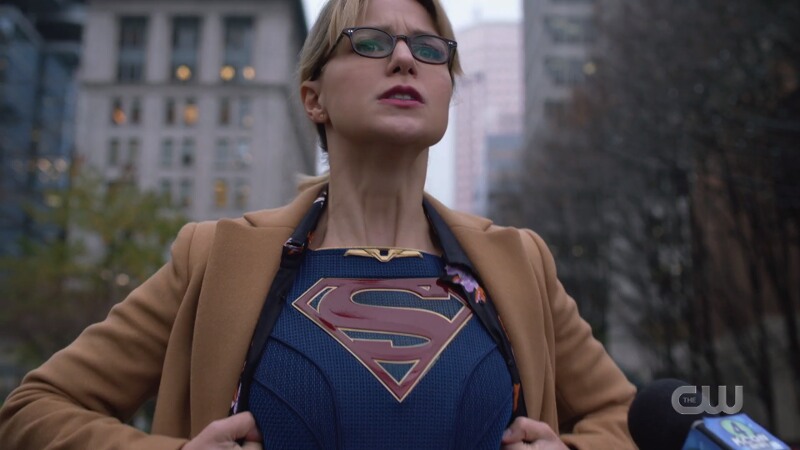 I feel like probably they could have had J’onn transform into a woman who doesn’t exist and “come out” as Supergirl but fine this works too.

Supergirl flies to Ben’s lair and saves Lena and they hug and it still seems like maybe this is the best timeline, until Mxy shows her another news headline. After coming out, everyone Kara has ever cared about, from Alex and Winn all the way to Cat fucking Grant was murdered.

And so Kara is resigned to one truth: There was no good time to tell Lena she is Supergirl. The fact that the timeline where Lena is working with Lex on a mystery project is the best timeline so far feels very disheartening. 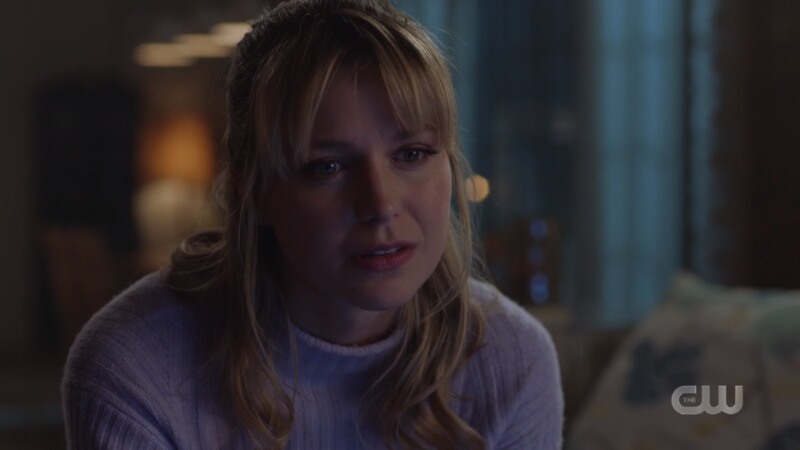 Me watching Supergirl the other 25% of the time.

But Kara has one last idea. You can tell she hates it before she even finishes saying it, but she’s so desperate for there to be a time when Lena doesn’t feel the pain she’s feeling right now. So Kara wonders…what if she and Lena were never friends in the first place?

But as soon as Mxy snaps his fingers, the place where Kara’s loft once stood is a pile of rubble and Kara is like, “You know what? I hated this plan anyway, this is all the proof I need, let’s go back.” But the thing is, Mxy can’t snap them back this time. In fact, he can’t feel the Fifth Dimension at all.

A robot storms toward them, telling them they’re breaking the curfew enacted by Luthor Law, and the AI has the word HOPE printed across its chest. Before they can react, Dreamer is there to save the day. 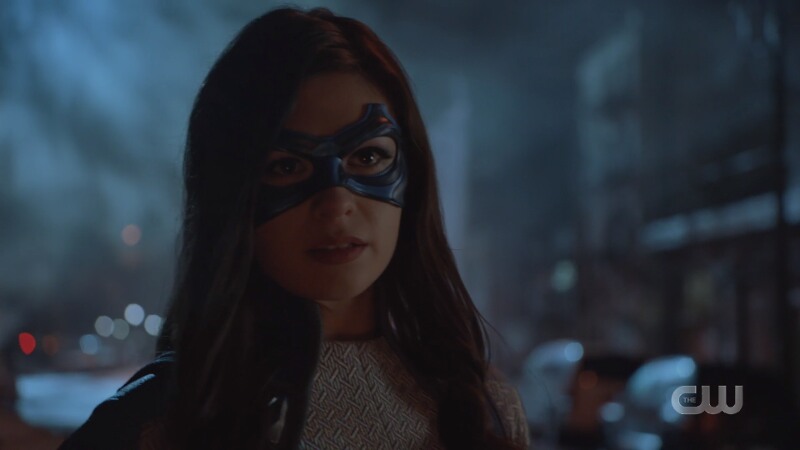 The only good thing about this timeline is that it gives Dreamer more screentime than the original timeline.

Nia takes them to The Tower, where they watch an announcement by a darker-than-usual Lena calling Supergirl a terrorist and promising her people she’ll keep them safe. 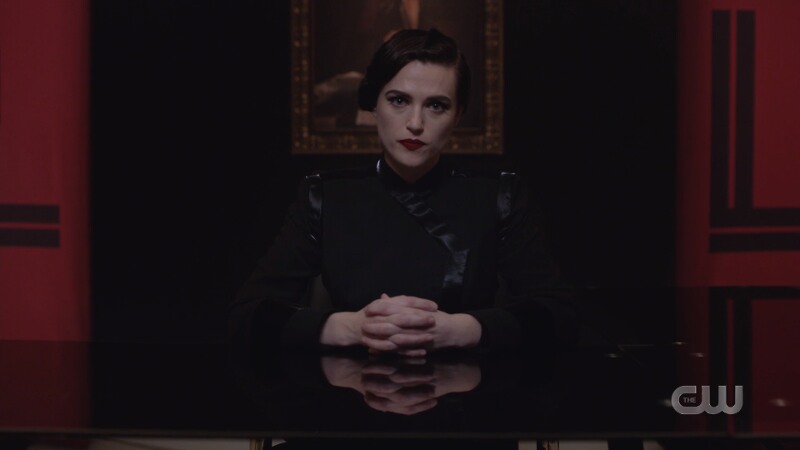 The phrase, “Govern me, mommi” comes to mind.

They explain to Kara that Lex tried to assassinate Lena and she got seriously injured, and she disappeared for two years. When she came back, she killed Lex, and the trauma and loneliness had turned her into a shell of who she used to be. Now she’s a ruthless leader, protected by the Hope robots and defended by Reign and Brainy. Lena uses the Fifth Dimension to power the robots, which is probably why no one else has access to it, but Winn knows of a hat they could use.

The boys head off just as Reign and Brainy storm the tower. Dreamer protects them and tries to pull her mask off and talk to Brainy, but he’s unreachable. 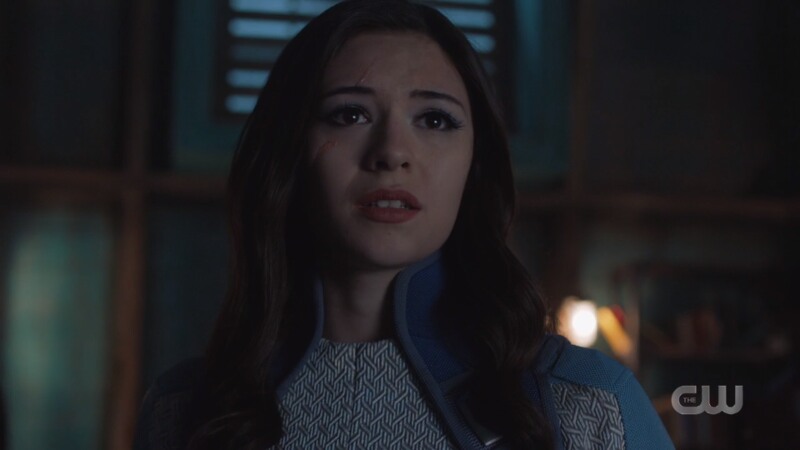 Kelly has Guardian’s shield and is fighting right by Alex’s side, and I know this simulation sucks, but I do hope we get more of this in the real world someday.

Kara, suited up, flies to Lena. She says it’s her Supergirl, it’s Kara. Lena says, “Who’s Kara?” and frankly that hurt me more than it had any right to. 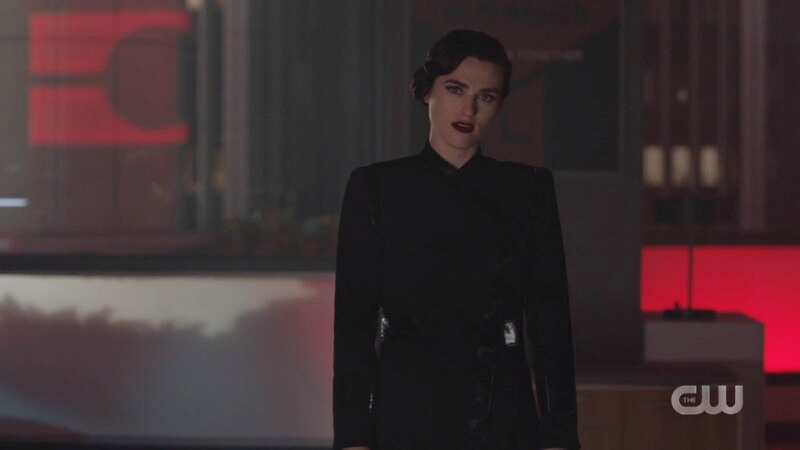 I will never begrudge Lena her deep purples but damn does she look good in all black.

Supergirl tries to reason with Lena, saying they want the same things, to do no harm, but Lena’s not so sure. She tells Supergirl about how her brother blew her helicopter out of the sky, how her mother experimented on her instead of fixing her. She looks her in the eyes and asks, “Where were you?” 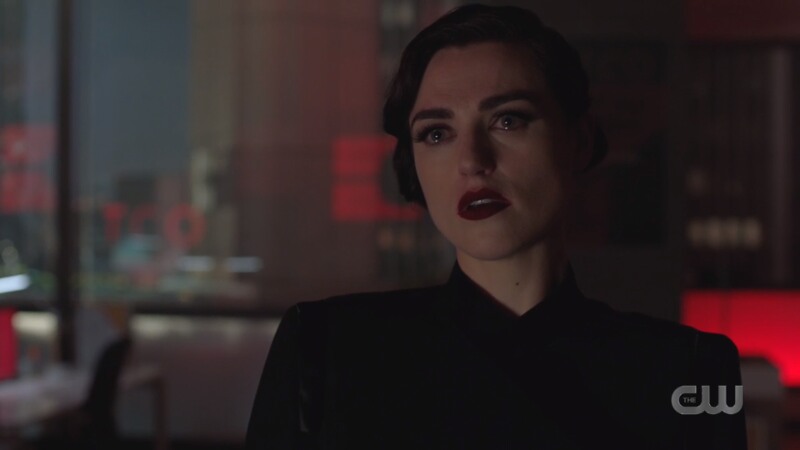 Even in the timeline where Lena is the closest to being an actual villain, all she really wanted was a goddamned friend.

Kara’s heart cracks open and breaks all over the floor, and before she can even begin to try to think of an answer to that question, Lena opens her jacket and blasts kryptonian at the alien in her office.

While the boys run off to get the hat, Alex and Kelly work together to fight Brainy, and J’onn fights Reign. J’onn ends up obliterating Reign which is how I know this timeline isn’t salvagable by any stretch of the imagination.

Meanwhile at CatCo, Lena leans down over the weakened Supergirl, and says she doesn’t know anything about pain, as she continues to shoot her with her kryptonite beam. 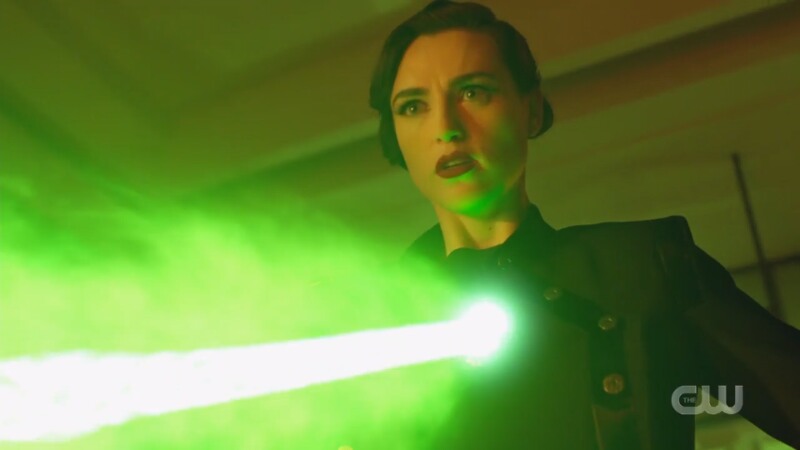 Again, even in her darkest timeline, Lena doesn’t seem to be particularly enjoying hurting Supergirl.

Kara grits her teeth against it and says she won’t fight Lena. She won’t hurt her. Lena says that just means Supergirl will die screaming and shoots her more.

But before Kara can die again, Mxy gets the hat and undoes this whole situation. Kara is exhausted, physically and emotionally, and even though Mr. Mxyzptlk is ready to give it another go, Kara is quite done with all that. Kara says that what she’s learned from all this is that there was no perfect answer, that actions always have consequences, and frankly the devil you know is better than the devil you don’t. She has to live with her mistakes, and make them right herself instead of trying to snap them away with magic. She thanks Mxy, and he apologizes for last time he was there. She sets him free, and he thanks HER for making him feel like he had friends.

He then drops a gem, because apparently this episode is full of them: “The magic of friendship can’t be forced. It has to be found.”

He leaves, and Kara flies herself to Lena’s apartment. When she lands, Lena expects either an apology or a lecture, like always. But Kara isn’t there to try the same things she’s been trying. Because the thing is, nothing has worked. She’s tried apologizing, she’s tried giving Lena space, she’s tried changing the whole goddamned timeline, and nothing has gotten Lena to change her stance. So she puts the ball in Lena’s court. She says that she can’t carry around this regret anymore, because it’s not helping anyone; they can’t change what happened. And just because you hurt someone doesn’t mean you can hold yourself accountable for what they do in their pain. Kara regrets not telling Lena sooner, but it was Lena’s choice to work with Lex, that’s not Kara’s fault and she can’t take on all of that guilt. 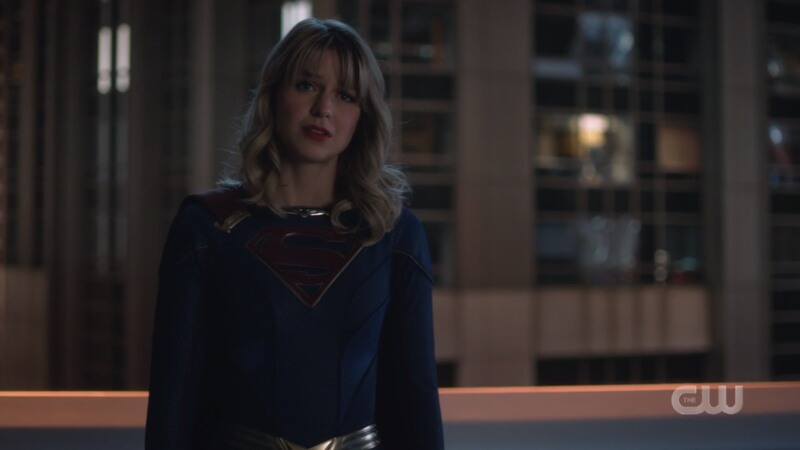 “I’ll leave my window open. ‘Cause I’m too tired tonight to call your name. Just know I’m right here hoping that you’ll come in with the rain.”

So Lena can accept Kara’s apology, in which case Kara will be there for Lena, right by her side, just like she always has been. But if Lena chooses to work with Lex, Kara will stop her. She says, “Just like I would any other villain.” 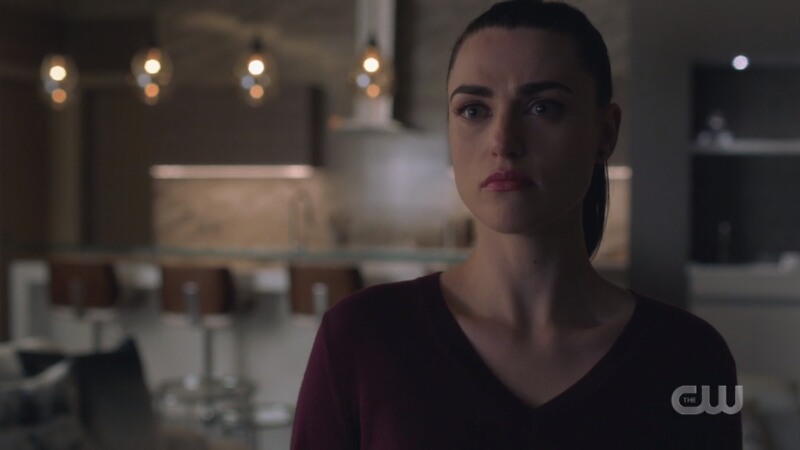 Kara goes back to her loft and says that she has to learn to own her mistakes but also move on from them. And then she gets this goofy smile on her face that makes Alex ask her what on Earth is happening in that alien brain of hers. 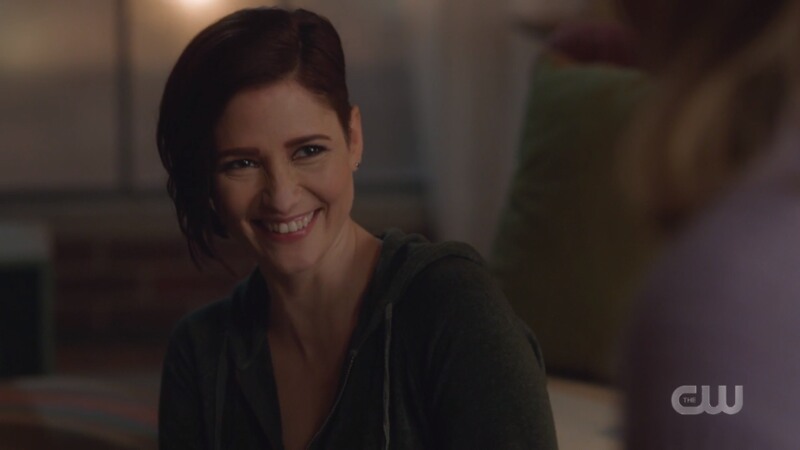 I know the show and therefore these recaps have been Kara and Lena heavy lately but just a friendly reminder that I would die for Dr. Alexandra Danvers.

And Kara looks at her sister and her Space Dad and says that they’ve been with her since the second she became Supergirl. For her best and worst moments, for her ups and her downs, for her losses and her wins. For 100 episodes. They crossed networks for her, crossed timelines and universes, crossed-over and got cross, and everything in between.

Together we’ve had 100 episodes of SuperFriends, of lesbian hero Director Alex Danvers who came to us right when we needed her most. All 100 episodes weren’t perfect, but what show with 100 episodes has been perfect all the way through? If the show ended after this episode (which thankfully it isn’t; we still have another season at least) I would be able to confidently say there were far more good episodes than bad. More laughter and hope than frustration. More excitement than not. And just like Kara herself, much more light than darkness. 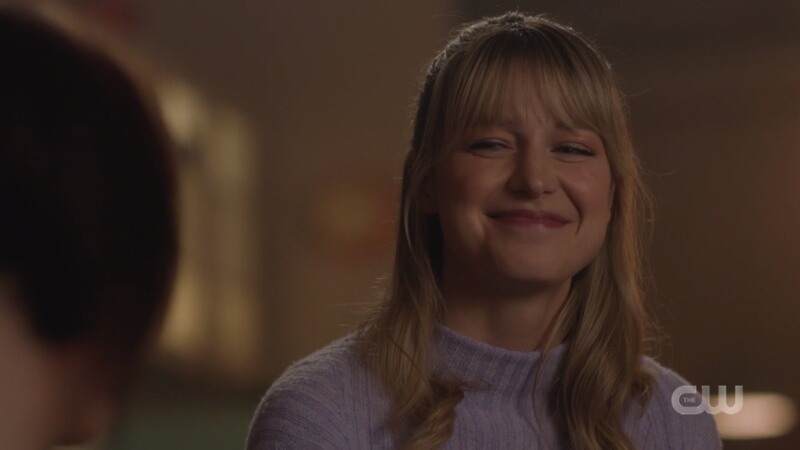 The truth is, this show never fully lost its hold on me, and I look forward to seeing where they go from here. And while I was expecting a few more guest appearances this week, I will say that I overall enjoyed this episode. It was nice to revisit some classic Supergirl scenes, and it was a nice reminder that regret isn’t a useful emotion to hold onto for too long.

And so, just as Kara did with Alex and J’onn, I will raise a french fry to you and thank you for all the support you’ve given me over the years of me recapping this show, all the discussions and debates and inside jokes and laughter we’ve shared. Because family is what you make it, and we’re stronger together. El mayarah.

Valerie has written 272 articles for us.