The 2016 Eisner Nominations came out recently, and a ton of really great comics and creators got nominated. It can be rough — and expensive — looking through all the categories and nominees, which are on the Eisners website, so I put together this handy list of some of the comics I think you should check out and that I think you’d enjoy! 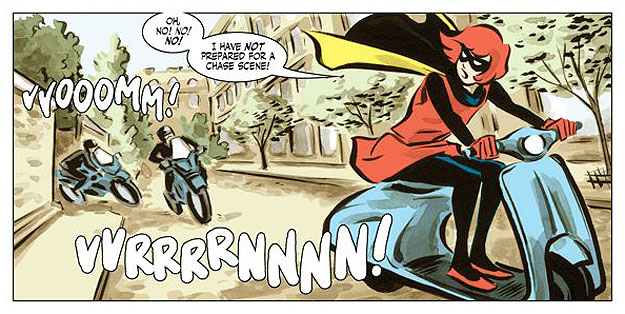 This series picked up nominations for Best Continuing Series and Best Digital/Webcomic, as well as Best Painter/Multimedia Artist for Coover. I’ve actually never read this, but it looks super cute and fun and I know a lot of people who love this series about a teen bandit running and jumping around in Paris. 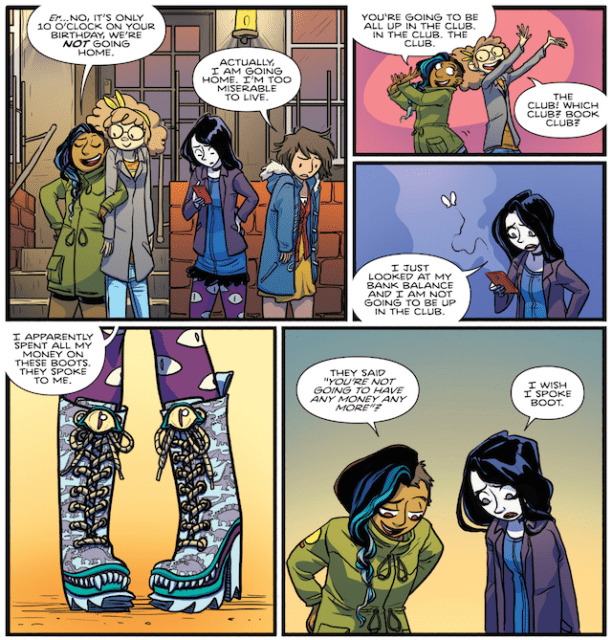 Nomintated for Best Continuing Series and Best Writer for Allison, this is a pretty great series from Boom!. I’ve only read the first trade, but this comic about a group of female friends in college is funny, has really great characters and has wonderful art. Also, it’s got queer ladies in it, so that’s good. 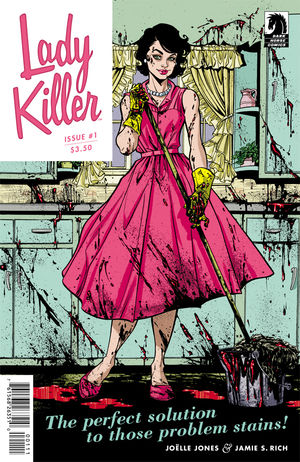 Jones got a nomination for Best Cover Artist for this and her work on Brides of Helheim, and Laura Allred got a nom for her coloring work, plus it snagged a Best Limited Series nomination. It’s about a woman who’s the picture of a perfect 50’s housewife, but is also a skilled killer. Sounds like fun. 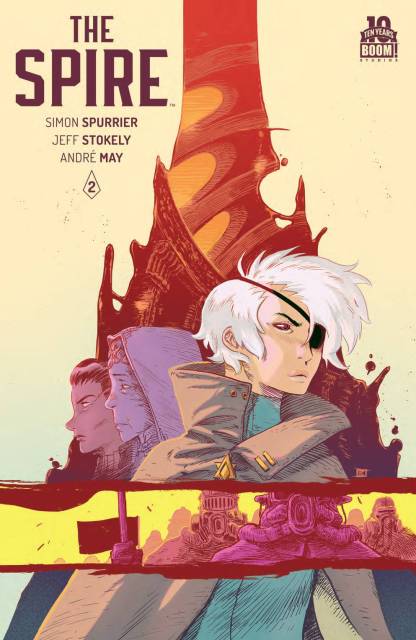 The Spire by Simon Spurrier and Jeff Stokely

Nominated for Best Limited Series, The Spire is another book with queer women. The creators described this sci-fi/fantasy series about a hybrid-human head of security investigating a murder in a futuristic city known as The Spire as “one part Mad Max, one part Blade Runner, one part Dark Crystal, one part nutfuck insanity.” 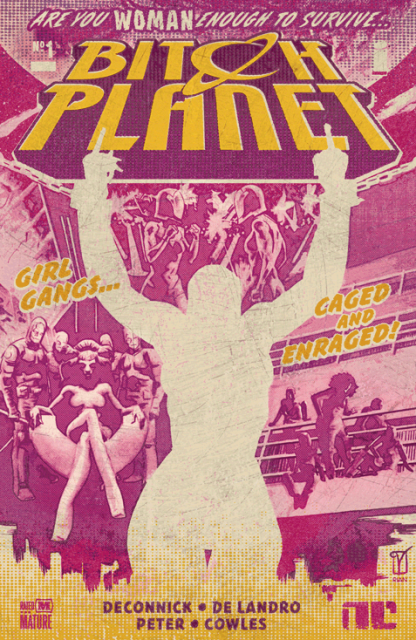 Best New Series is the best category this year, in my opinion. It’s going to be a tough one, and Bitch Planet leads it off. I mean, come on. You’ve got to check this series out. It’s, in my opinion, the Best Comic In the World Right Now, taking that title from Saga, the previous title-holder. It’s a feminist kick in the ass with stunning visuals and brilliant writing. I can’t think of a better comic to read. If you don’t already know, this series is a sci-fi and women-powered take on the exploitative Women in Prison genre. Get on it. 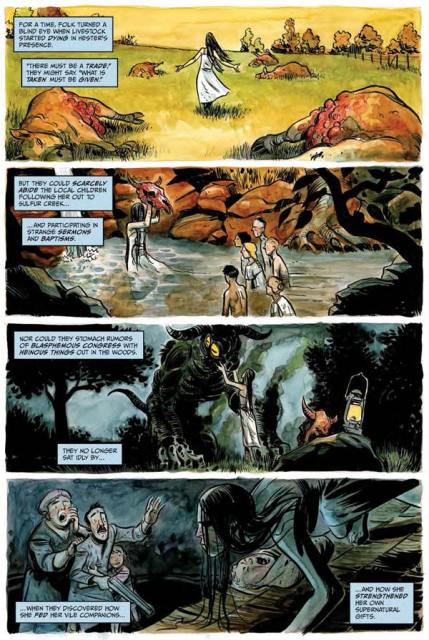 This second Best New Series is a comic about witches, and it’s damn scary and has super great, and again, scary art. It’s a great throwback comic that not only features a classic Americana setting, but also features the classic heavy atmosphere and slow pacing of a classic horror movie. 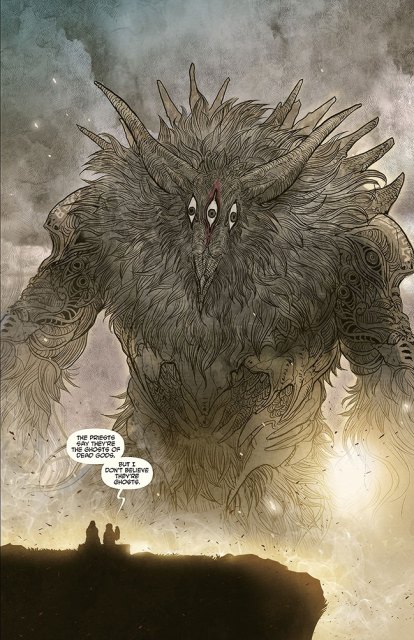 This is the series that I most want to read right now that I’m not. It’s another nominee for Best New series and also for Best Writer for Liu. Set in an alternate history Asia, this series is about a teen girl named Maika who has a psychic link to a “monster of tremendous power.” The art looks gorgeous in this one, Liu is a genius, and I’m in love with the premise, setting and characters. I’m going to go check this one out.

While Brian K. Vaughan does sometimes mess up when it comes to writing trans, queer and women characters, he’s also undeniably talented, and Chiang’s art is just off the hook, which makes sense as he was nominated for Best Penciller/Inker to add to this 80’s throwback comic about some girls fighting off an invasion of time travelers’ Best New Series nomination. 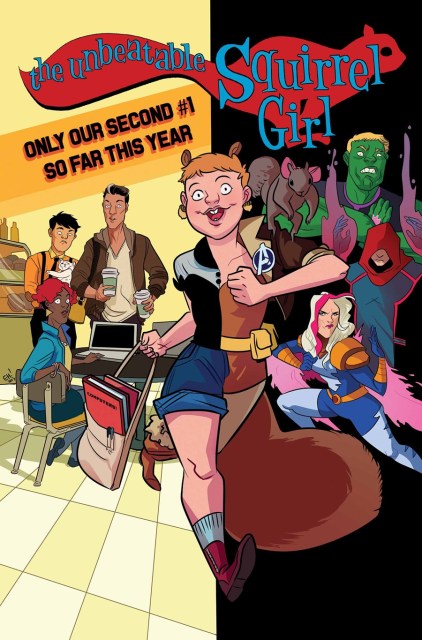 The Unbeatable Squirrel Girl, by Ryan North and Erica Henderson

The best superhero comic on the market is also up for Best New Series. Anyone and everyone, no matter whether you hate superheroes or love them, will love this comic. I mean, come on, Erica Henderson’s Best Penciller/Inker nomination, which is also for her work on Jughead, is worth the comic alone, and so is Ryan North’s writing. So when they’re combined, it creates something truly magical. And jeez, who doesn’t want to read a comic about a superhero named Squirrel Girl who goes to college with her cat-loving roommate Nancy and fights crime with Koi Boi and Chipmunk Hunk? 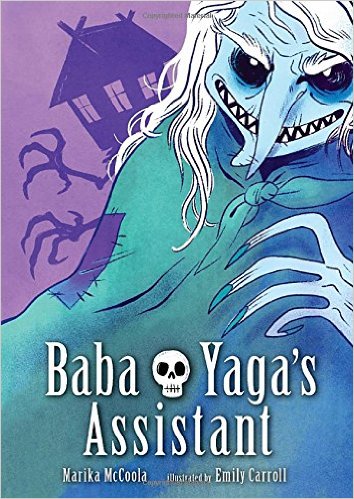 This was nominated for an ASCA last year for Best Graphic Novel, and how it’s being nominated for Best Publication for Kids (ages 9-12) here. It has a super cute and pretty dark (but still age-appropriate) story about the classic witch and a young girl who wants to become her assistant. It also has stupendous art by the ever-brilliant Carroll. 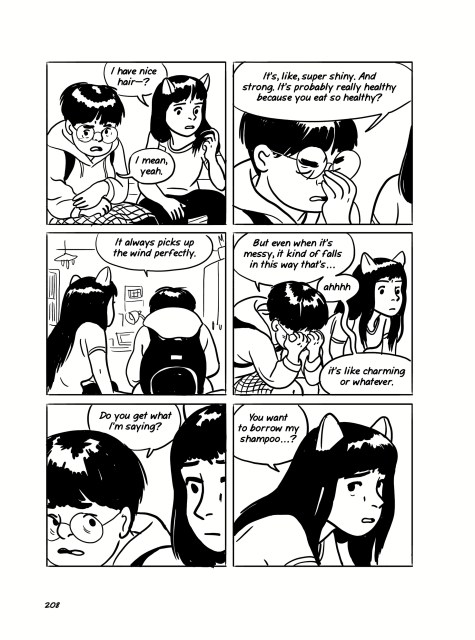 This is without a doubt the best graphic novel I’ve ever read, and probably just the best book of any kind that I’ve ever read. It’s definitely my favorite. It made me have an existential crisis about once every ten pages. If you believe in miracles, this book is one, and if you don’t, this book should convince you to change your mind. If you want to be my friend (or more than my friend) you should probably read this book multiple times. This book is my middle name. Here it’s nominated for Best Publication for Teens (ages 13-17) and I’m rooting for it to win. 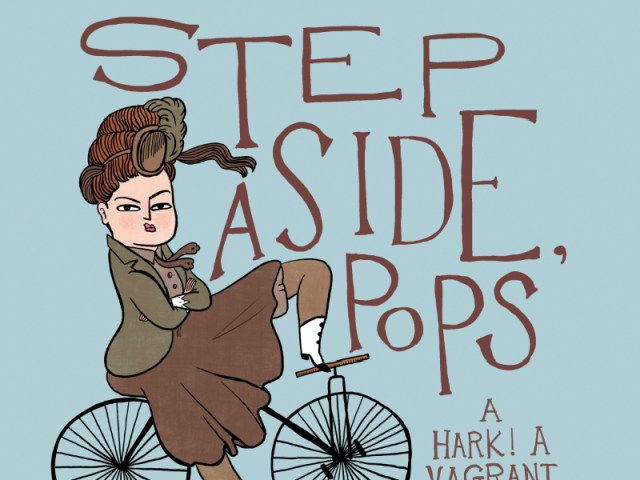 Step Aside, Pops: A Hark! A Vagrant Collection, by Kate Beaton

Beaton smashed it out of the park with this hilarious and educational as always collection of her classic webcomic and secured a nomination for Best Humor Publication. As usual, Beaton put together some of her best comics about history, literature, annoying teens and superheroes and every comic is an absolute gem. 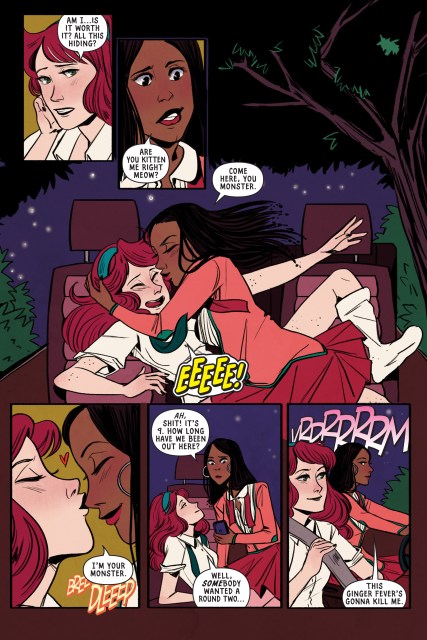 I’ve written a ton of times about Fresh Romance, which featured great work by Kate Leth, Amanda Scurti Sarah Winifred Searle, Sarah Vaughn, Sarah Kuhn Arielle Jovellanos and Sally Jane Thompson, among others, and is now nominated for Best Digital/Webcomic. My absolute favorite story is School Spirit, which is like an amazing and adorable gay and magical Archie story straight out of my dreams. 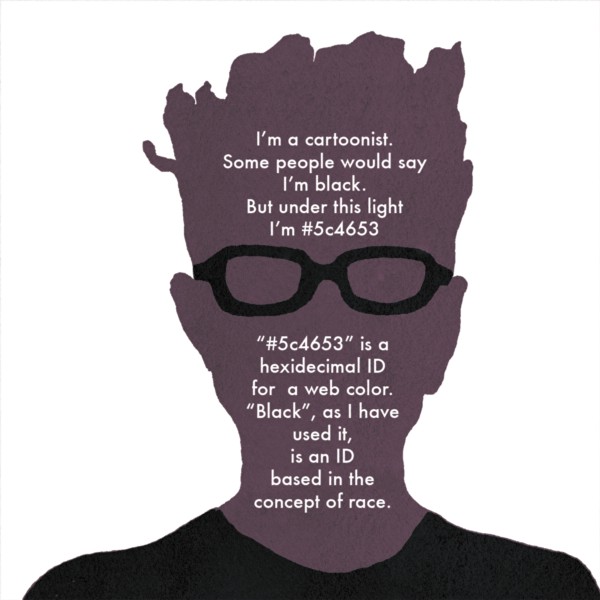 Lighten Up, by Ronald Wimberly

This other nominee for Best Digital/Webcomic stunned me when I saw it on tumblr. It’s a devastating and brilliant look at coloring in comics and how that ties into racism and colorism. It’s beautiful, thought-provoking, anger-provoking and simply one of the most important online comics I’ve ever read. 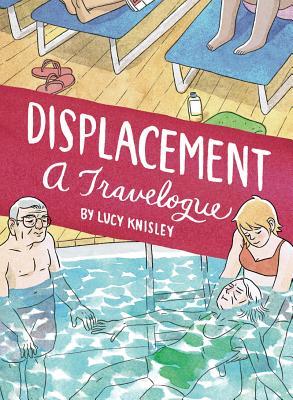 Displacement: A Travelogue, by Lucy Knisley

Knisley got two noms for this book, Best Reality-Based Work and Best Lettering, as she detailed what her life was like as she took a cruise with her two elderly grandparents. It’s confessional and has beautiful watercolors in it and a really great story about family, travel and life. 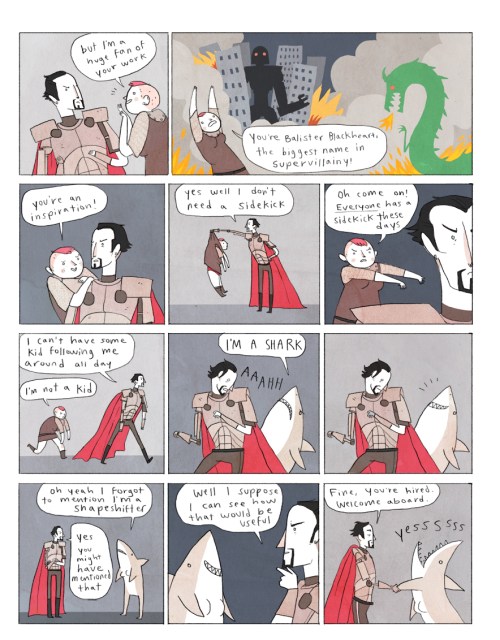 How were we blessed to get both Nimona and SuperMutant Magic Academy in the same year? Honor Girl by Maggie Thrash in that same year too, for that matter? These are all-time great books. Anyway, Nimona, which is about chosen family, the nature of good and evil, gay love, corrupt governments and weird science (and also a shapeshifter who turns into a shark with boobs) is up for Best Graphic Album-Reprint, which would add to it’s already impressive list of awards.

A few other creators that are great, like G. Willow Wilson for her writing on Ms. Marvel, and Jordie Bellaire and Elizabeth Breitwiser for their coloring were nominated. Also, some comics that I haven’t read, Roller Girl by Victoria Jamieson for Best Publication for Kids (ages 9-12), The Legend of Wonder Woman by Renae De Liz for Best Digital/Webcomic and Awkward, by Svetlana Chmakova for Best Publication for Teens (ages 13-17), but seem pretty cool got nominations.

Cleopatra in Space Vol. 3 Secret of the Time Tablets