Kelly Sue DeConnick has been one of my favorite comic book writers for a long time. Her version of the Avengers is my favorite version of that team ever, of course her run on Captain Marvel is one of the best things ever, and her collaboration with Emily Rios, Pretty Deadly, was an absolute revelation. I’ve also long been a fan of comics about diverse, kickass women teaming up against the patriarchy. Those things come together perfectly in Bitch Planet. 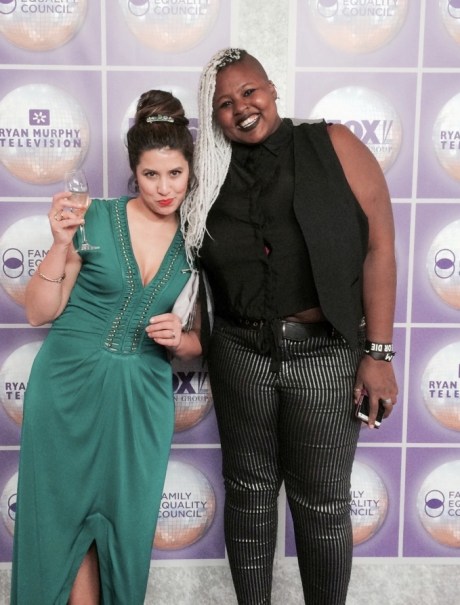 To quickly sum up the premise of Bitch Planet, which has art by Valentine de Landro, it’s sort of like an extra-violent, outer-spacey Orange is the New Black. In the future, there’s this prison world, informally called Bitch Planet, where all women who are deemed “non-compliant” are sent by “The Fathers” to learn their lesson and repent. Non-compliant can mean everything from commiting a crime to being too fat to not fitting the patriarchal ideal of what a woman should be. However, while they’re there, they’re also being recruited to earn some money and some ratings by starting to participate in a violent future sport called Megaton.

Just on the basic level of being a comic written by a woman starring a bunch of diverse women of color who have complex backgrounds, complicated characterizations and strong voices, this comic is amazing. And just on the basic level of having terrific — and I mean terrific! — and unique writing and art, this comic is amazing. Plus, there’s the promise of LGBTQ characters, including a trans woman who DeConnick said “is a very important character. But [her being a transgender woman] that’s not what is important about her. What’s important about her is about who she is.” How many comics can you think of that are about a bunch of women, most of them women of color, and several of them queer, teaming up to, quite literally, fight the patriarchy? 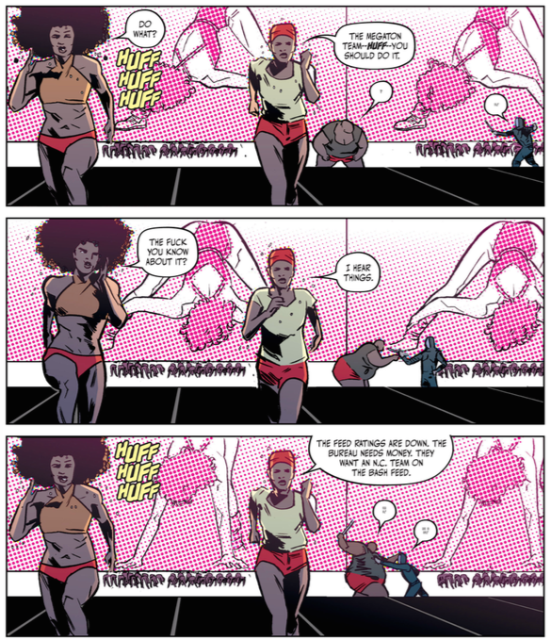 The first issue made it seem like it was going to be similar to Orange is the New Black in that it would have a wide variety of women of color, women of different sizes and other diverse women, but the main character would still be a fairly typical white female protagonist. However, the end of that issue showed us that this wasn’t the case and instead introduced us to Kamau Kogo, who was also the focus of much of Issue #2 where she’s recruited to lead a team of fellow inmates to fight in Megaton, which is some sort of futuristic arena sport that seems to involve people getting their “asses beat,” as Kamau puts it. Other than Kamau, a few characters that are starting to step up and get noticed are Violet and Meiko, two inmates who each bring their own proposals to Kamau about why and how she should form the Megaton team. And then, of course, there’s Penny Rolle.

If you weren’t already on board, Issue #3 came out, showed us “The Secret Origin of Penny Rolle” and blew us all away. Penny was already one of my favorite characters, what with her awesome body-type that you so rarely see in comics, her bold defiance of the patrarchy and her willingness to jump tackle the guards at the drop of a dime. You see, every third issue will feature a guest artist, in this case Robert Wilson IV, and will show the background of one of the inmates. I am so freaking glad that they did Penny Rolle first. Comics so rarely have characters that look like Penny, and when they do, we never get to see them so fully realized or so humanely treated. And what makes it even better, is we’re not just supposed to sympathyze with her or feel bad for her because of her body, we’re supposed to actively celebrate her. In a world that tells us that we should hate a body like hers and be disgusted by it, and doubly so because she’s black, this comic shows us a woman who loves herself boldly, defiantly and wholly for who she is. This is not just one of the best single issues of a comic I’ve read this year, it’s also one of the most important. 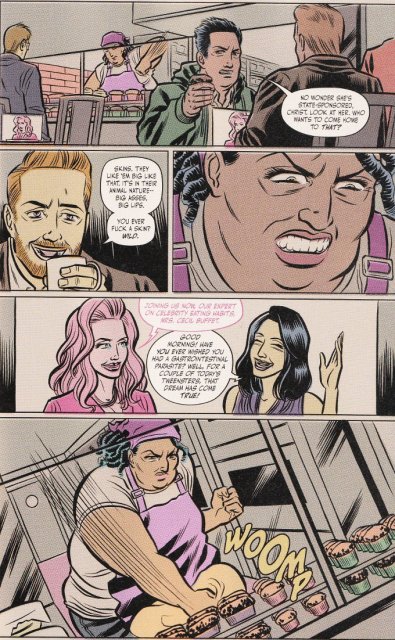 This comic is also so terrific on a more meta level. Each issue is so exquisitely crafted, with each detail just making the comic more perfect. The covers, done by artist de Landro, recall movie posters of the classic women’s prison exploitation films that inspire the series. In the back of all the issues there are essays by guest writers on various feminist topics related to the issue. So far these topics have ranged from the importance and relevance of feminism in modern American society by Danielle Henderson, common misconceptions about what feminism is by Tasha Fierce and being your own person, not a person who just lives to make others happy by Megan Carpentier. 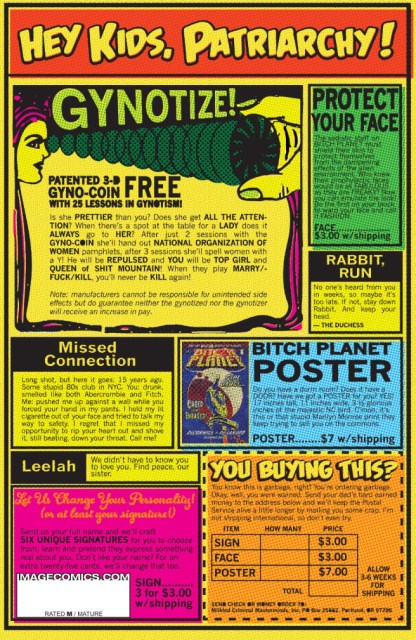 A great finishing touch is the back cover, which is fashioned like a classic comic book, with trash (as Kelly Sue herself calls it) that you can buy like non-compliant foam fingers, a set of “new” signatures in case you want to change your personality and posters, patriarchal ads that promise to help you hypnotize women or lose weight (along with “Your balance! Your energy! Your joie de vivre! Your will to live!”) and missed connections and personal ads. It’s these missed connections and personals that really get me, though. On the back of Issue #2, there’s one that says “Leelah: We didn’t have to know you to love you. Find peace, our sister” in a clear move to honor the transgender teen Leelah Alcorn who took her own life. Issue #3 contains several that give absolutely terrifying statistics about domestic violence against women. DeConnick and her team have really, really outdone themselves.

I could read this comic for the rest of my life and be happy. De Landro’s art pairs up so perfectly with DeConnick’s writing. Since it’s so heavily inspired by women in prison exploitation films, the art could so easily be exploitative. But de Landro does such a brilliant job and handles it all so well. Seriously, the art is co cool and adds so much atmosphere and character to the comic. Bitch Planet is on the same must-read level as comics like Saga, Ms. Marvel, Sex Criminals, The Wicked + The Divine and Lumberjanes. If you’re not already Non-compliant, now’s the time to get step up and join the team. 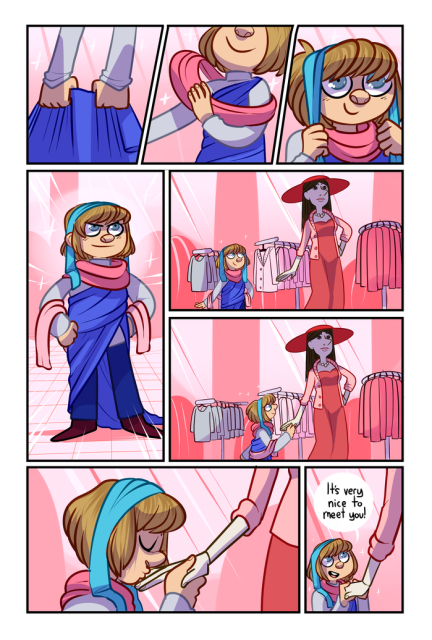 From “Practicing” by Taylor Robin in Love in All Forms

There are also a few Kickstarter campaigns that I think are definitely worth checking out. Maya Kern is releasing a book of her ACSA Award winning webcomic Monster Pop!. This is a terrific comic with great art and amazing characters and I really hope everyone checks out this fundraiser. Also, there are a ton of sweet prizes, including a George Eye Sleep Mask (which I picked out for my prize). There’s also a new Kickstarter for the upcomic comic anthology Love in All Forms: The Big Book of Growing Up Queer, which is brilliantly adorable looking and is described as “An anthology of children’s comics about kids aged 5-12 who are gay, lesbian, bisexual, transgender, queer, intersex, asexual, and more!” So if you want a perfect gift for a young person in your life, this looks like it could be it. Also, if this Kickstarter reaches it’s stretch goal, there will be a bonus of 30 more pages of content!