I am far, far from the only person who’s going to tell you this, but Image is putting out some of the best comics not only of this year, but of any year I can think of. They’re not one of the “Big Two” comics companies, but if you were to judge based on quality of product, they’d straight up be The Big One. They’ve got Saga, The Wicked + The Divine, ODY-C, Bitch Planet, Sex Criminals, Rat Queens and seemingly dozens of other titles that are regularly showered with praise by both critics and fans alike. Seriously, sometimes it blows my mind that Image isn’t more popular than Marvel and DC combined. Obviously, a huge part of the reason is brilliantly-crafted original and creative stories, characters and art, but you can be sure that a part of their success, and a part of their ability to create such amazing stories and characters is due to their commitment to diverse characters, including trans ones. 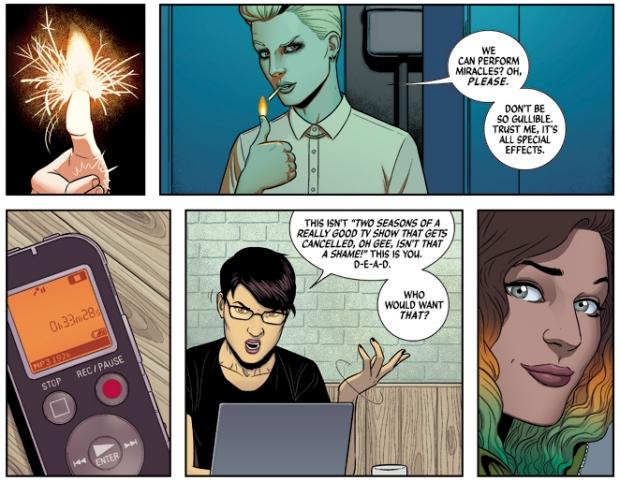 Luci, Cassandra and Laura in The Wicked + The Divine. Art by Jamie McKelvie

Right now, Image Comics has four trans women characters that I know about, and there could easily be more. The Wicked + The Divine, Keiron Gillen and Jamie McKelvie‘s series about a biracial British teen named Laura and a group of gods who reincarnate as teenagers and become superstars every 90 years. One of the main characters who isn’t a part of the pantheon is a journalist named Cassandra, who is also a Japanese-British trans woman. Now, Cassandra is cool. She interviews and writes stories on these gods who, frankly don’t impress her much, and when she comes face-to-face with them as they show off their literally god-level power, she’s still not impressed in the slightest. She’s got ice-cold blood running through her veins, but she’s also one of the only people Laura can trust. There’s even this great moment in issue #5 where Luci, who is literally Lucifer, the devil, apologizes to Cassandra for a transphobic dig she made earlier. Yes, even the literal devil knows that being transphobic is wrong. 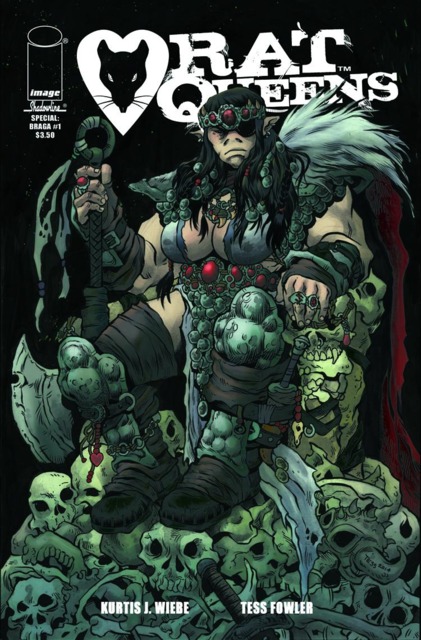 The second trans woman in an Image comic that I read is from Rat Queens, a book about a Dungeons and Dragonsesque all-female group of adventurers. This book recently had a bit of trouble as its artist was charged with domestic abuse, but they quickly switched in a new artist and in the very next issue revealed that one of its secondary characters, the orc Braga, is a trans woman. Braga first made her debut in the first issue of the series as the leader of one of The Rat Queens’ rival groups, The Peaches. However, when their town was under attack, she proved to be a valuable ally. In the oneshot Braga #1 we get to see an extended back story for her and we find out, among other things, that she is a trans woman.

Zhen laying down some truths in Trees. Art by Jason Howard

As for trans women in comics I’ve yet to read, Trees by Warren Ellis and Shutter by Joe Keatinge both step up to bat. In Shutter, which has been described as an “Indiana Jones-style urban fantasy” starring a woman of color, the main character’s best friend is Alain, a Filipina trans woman. Trees is a science fiction series is about how people on Earth are reacting ten years after a series of tree-like alien lifeforms landed all over the planet and took root. One of these “trees” landed in the fictional Chinese city of Shu, and that’s where the character Chenglei, and Zhen, the trans woman he wants to date, live. When Chenglei goes to his uncle to get advice on whether or not he should keep pursuing her, his uncle tells him to stop being stupid about it and go talk to Zhen instead. This is also when Chenglei’s uncle comes out as a trans man to his nephew.

There’s also a bit more representation for trans men and non-binary characters. There’s Telem, Odyssia’s son in Matt Fraction’s ODY-C. This retelling of The Odyssey exists in a universe where everyone is either a woman or intersex, save for one person named He, who is this stories’ Helen of Troy. Odyssia is thinking back on her home, including her child Telem, whom she remembers as her daughter. However, on the final page of issue #1, we see that Telem is actually her son. Now, it’s not clear if Telem is trans, but that’s one strong possibility, as Odyssia was there when he was a baby and seems to think that he’s a girl. Finally, there’s the character Inanna in the previously mentioned The Wicked + The Divine. Inanna is a goddess who was reincarnated in a person who, up until then, had been presenting as male. After they became Inanna, however, they started presenting much more androgynously (actually, pretty much like Prince), saying that now that they’re a goddess (and they do talk about themself as being a “goddess”), they feel more free to be their true self.

It would be nice to see more diversity among the trans characters in comics, though. If you include Alysia Yeoh from DC Comics’ Batgirl, that makes four out of four human trans women in comics that I know of who are ethnically Asian (which might say something about the way Asian people are often exoticized and Asian people who are assigned male at birth are often feminized). I’m definitely not complaining that they’re trans women of color, but still, some more diversity would be nice. Also, more non-binary and trans men characters would be nice. And hey, I’m still looking for the first straightforward trans woman super hero. 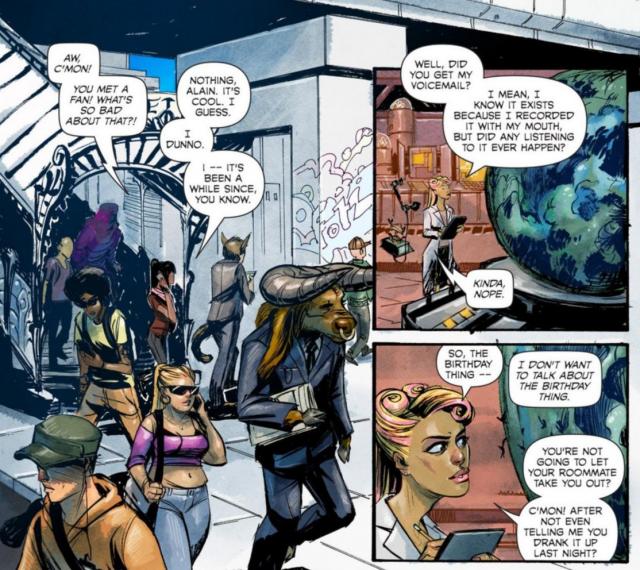 These are just the trans characters that we know about. Image Comics’ and these creators’ willingness to embrace diversity in their comics shows that it’s likely that this is only the tip of the iceberg. And then there’s the fact that other Image titles, like Kelly Sue DeConnick’s brilliant Bitch Planet (which Deconnick said has a trans woman character whose past hasn’t been revealed yet) and Fraction and Chip Zdarsky’s Sex Criminals (which I’ve heard trans character rumors about) already have trans characters who haven’t been revealed as being trans. As long as Image keeps on putting out such a high level of quality comics, and as long as those comics have trans women, it’s going to continue to be one of my favorite sources, not just for comics, but for any kind of entertainment of any medium.

As a side note, this past Sunday was Hourly Comic Day, where comic creators draw a short comic for every hour that they’re awake. Several Drawn to Comics favorites participated, including Strong Female Protagonist artist Molly Ostertag, As The Crow Flies creator Melanie Gillman, Through the Woods author and illustrator Emily Carroll, Help Us! Brave Warrior creator Madeleine Flores and our very own Saturday Morning Cartoons artist Anna Bongiovanni. You can also check out your favorite artists’ tumblrs, twitters or instagrams to see if they participated.