Going to camp is often one of the most memorable parts of a young person’s life. They can learn new skills, make new friends and maybe even have one of their first romances. However, for those of us who happen to be people of color in predominantly white areas, queer or both, the experience can bring anxiety, stress and alienation where it should be bringing fun, community and lasting memories. It can also lead to profound questions and new discoveries about yourself and those around you. This is the story that Melanie Gillman’s As The Crow Flies so beautifully tells. 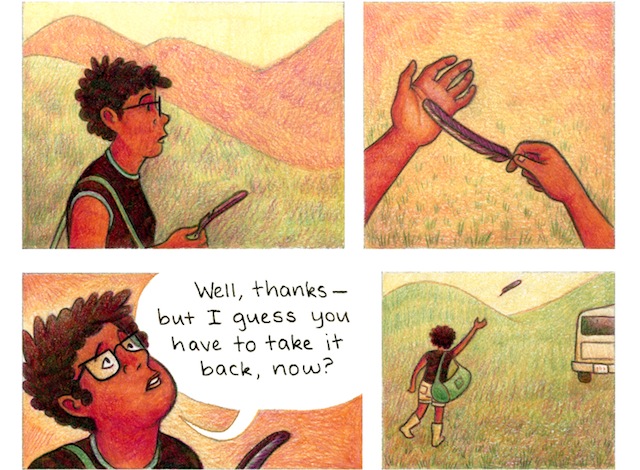 This webcomic starts off with Charlie being dropped off at a camp for Christian girls by her parents. She’s a chubby, short haired, tomboyish 13 year old black girl who is starting to realize that she might be queer. As soon as she is able to get a good look around, she realizes something else; all the other campers are white. For someone already feeling a lot of nerves about going to this camp, this realization immediately makes her heart start beating out of her chest. To make matters worse, the one sign of comfort she had, a single crow’s feather she found outside is taken away from her after she is told that one of the girls has an allergy. She’s been looking for a sign from God that she’s meant to be there and she sees the feather as a good sign. Now it’s being taken away.

Luckily for the main character, there are a few others at the camp that seem like they have something in common with her. The first one is fellow camper, Sidney, who may be one of the younger girls there, but is also the most outspoken. She is constantly questioning what the leaders tell her and when another camper says something is “so gay,” she immediately calls her out on it. She also starts throwing hints Charlie’s way that she isn’t the only one at the camp who’s queer. The second is Penny, the co-leader and daughter of the woman running the camp. As she is half Diné, or Navajo, she is the only other woman of color there and when Charlie hears others using problematic language, it’s good to know that she has someone she can go and talk to about it. 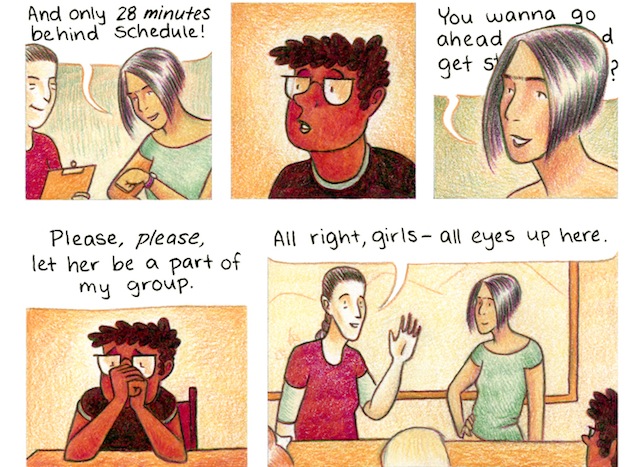 Being black while every other camper is white isn’t the only thing making Charlie feel alone and alienated though. She is also a burgeoning queer and is trying to deal with that while at a Christian camp. In a situation I’m sure a lot of us can relate to, she even develops a crush on the co-leader Penny. Gillman also is able to wonderfully capture the lack of intersectionality that permeates so much of feminist culture. This camp is based on the legacy of a group of proto-feminists and tries to foster an attitude of women’s empowerment amongst the girls who go to camp there. However, that doesn’t stop them from making horribly insensitive comments conflating whiteness with purity and joking about sending dogs after the camp’s lone African-American girl. And as the camp’s leader is singing the praises of these brave and noble women, the fact that they used “servant” girls, who were Native Americans and former slaves, to take care of their children while they went off into the mountains was going to be completely glossed over if one of the girls hadn’t brought up the question. And when it does come up, you can taste the fear washing over the main character. She knows that this could lead to some very uncomfortable conversations centered around her in the very near future.

The facial expressions and thoughts of the main character so perfectly capture her anxiety that you can’t help but feel what she is feeling and your stomach ends up tied in knots. When the other characters say and do problematic things you can see the pain on Charlie’s face as she struggles with the conflict between wanting to call them out and let them know just how uncomfortable they are making her feel and wanting to fit in and not cause problems. Sadly, this is a regular internal struggle when you’re a queer person or person of color growing up in a world surrounded by straight white people who are constantly telling you not to be so sensitive. The way she avoids the other’s glances and tries so incredibly hard to both speak up and avoid conflict is written and drawn in a painfully real and touching way. But not every moment is awkward and uncomfortable for Charlie. There are times when Charlie is standing in the majesty of nature. There are times when she bonds with the leader she has a crush on. There are times when she realizes she’s not so alone. And those moments are just as beautiful and powerful as the other moments are squirm inducing. 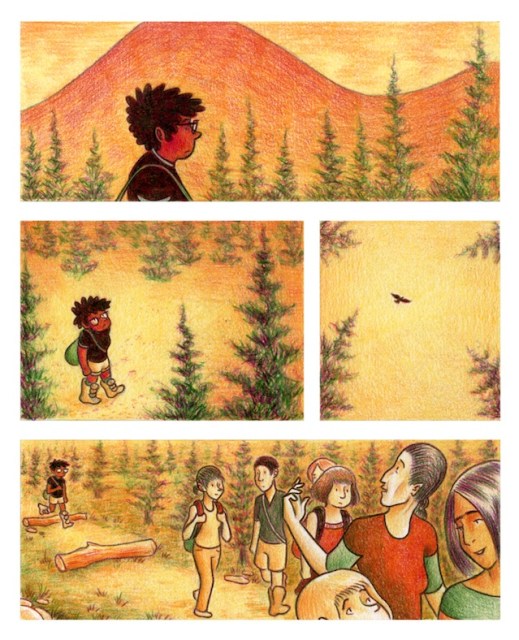 Gillman draws her comics using colored pencils, which gives it a unique and natural look (which is perfect for a comic that so prominently features nature). By using colored pencils, she is able to evoke a feeling of simplicity and low tech that makes you feel right at home amongst the mountains. You can see the pencil strokes where Gillman has so wonderfully blended the colors together and it really gives you an appreciation for just how much work she must put into each panel of the comic.