This week I thought I’d light a fire, pour out some drinks and get up close and personal. Every week I talk about some of the great comics I get to read, and many (maybe all?) of the webcomics that I talk about are ones that I read every week. But there’s another aspect to my comic fandom that I don’t talk about as much on here, and that’s my weekly pull list. For those of you who don’t know, a pull list is the list of comics you make at your local comic shop (mine is Captain Bengals’ Comic Cove at 348 N. 3rd st. in Pocatello, Idaho) that you’d like to buy on a regular, monthly basis. When they get the shipment of comics they’ve ordered each week, they’ll pull out whatever comics are on your list and hold them for you with the understanding that you’ll come in and buy it. That way you can make sure that you get to read all your favorite comics every week. Anyway, here’s my pull list. 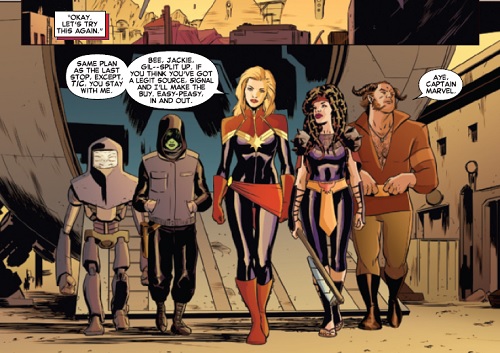 I started reading Captain Marvel back in 2012 when Carol Danvers (the former Ms. Marvel) took the title Captain Marvel and was starring in her own monthly series written by Kelly Sue DeConnick. The series recently took a small break and then was relaunched (still with DeConnick and artist David Lopez), moving the Captain from her home base in New York City to the far reaches of Outer Space, where her talents as a pilot and her cosmic origins can be fully taken advantage of. She’s recently been hanging out with the Guardians of the Galaxy and trying to help the population of a dying planet. This book is funny, has a cat in it, is totally action packed and has one of the most powerful and kickass ladies in all of Marvel Comics. 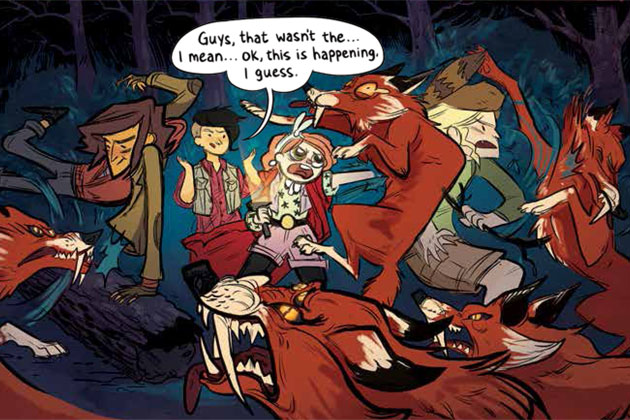 This, as you probably know by now, is the series from Shannon Waters, Noelle Stevenson, Brooke Allen and of course, Intern Grace. This hilarious and heartwarming comic is about a group of girls at a summer camp who are not only getting into wacky friendship adventures, but also wacky supernatural ones. This book has great art, great characters, great jokes and great stories. It’s perfect for all ages, it has queer elements, it’s all about girls and friendship, and it has just enough spooky to make it good. It’s pretty much amazing. 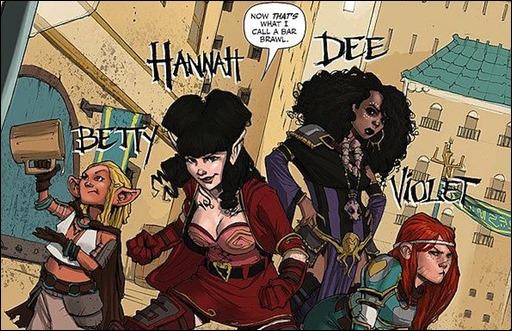 Ain’t nobody fucking with my clique

Rat Queens is the raunchy, violent, punk rock Dungeons and Dragons comic you never knew that you needed. Written by Kurtis Wiebe and drawn by Roc Upchurch, this is definitely the most fun you’ll have reading fantasy this year. It’s pretty much the fantasy comic book version of a Joan Jett song. Just look at this team. We’ve got Betty, the queer Smidgen thief; Violet, the dwarven fighter who started shaving her beard before it was cool; Dee, a human cleric who used to worship a squid god; and Hannah, an elven mage with a rockabilly haircut. The first storyline recently ended, so this is a good place to jump on. 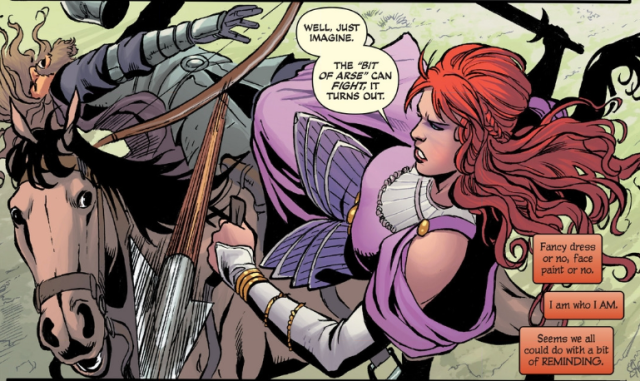 Don’t you dare make fun of her clothes

Back in 2012, Gail Simone relaunched this iconic title for Dynamite with art by Walter Geovani. You might be thinking, “wait, isn’t Red Sonja just a sex object who runs around wearing a metal bikini?” You’d be half right. She does often wear a scale mail bikini, but with Simone’s writing, she’s far from being just that. She’s a woman of contradictions. She slaughters her enemies mercilessly, but is willing to go to impossible lengths to save slaves she doesn’t even know. She’s simple in her desires — they’re normally just food, grog and sex — but she’s also clever strategist and knows how to think her way out of a tight spot. She’s known as the most deadly woman in the world, but she’s also a fiercely loyal friend. The current storyline has Sonja the She-Devil traveling far and wide to complete a series of tasks so that a dying warlord will free his slaves before he dies. This is an epic series that I’ve totally been loving.

She-Hulk is an awesome character. She was one of the stars of one of my all-time favorite comics FF, but that series ended, so I was totally pumped when I heard that she would be getting her own title. Written by Charles Soule and with art by Javier Pulido, this book really stands out from most other Marvel titles. It has a look and sense of humor that really make it memorable. In it, Jennifer Walters (also known as the superstrong She-Hulk) has just started up her own law firm (because she’s also a lawyer), is hanging out with her friend Patsy Walker (the superhero Hellcat) and has deal with problems both in and out of the courthouse. If you like the Marvel universe, but you’re looking for something a little different, this is perfect for you. 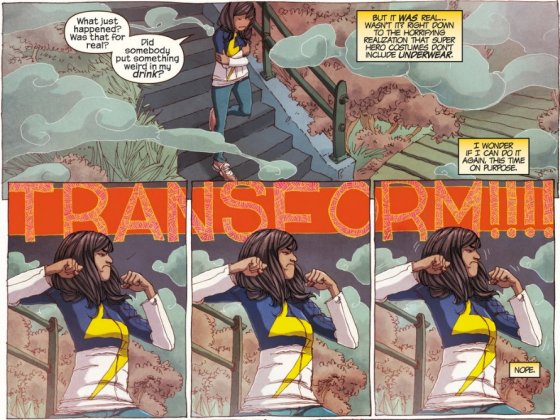 That’s how you activate your superpowers, right?

I’ve covered this comic here before. And that’s because it’s beyond great. This is a comic about a Pakistani-American, Muslim teenage girl named Kamala Khan who gets superpowers and uses them to help out her friends and take up the former mantle of the previously mentioned Carol Danvers, who as I said, is now going by the name Captain Marvel. Plus, it’s written by  G. Willow Wilson, a Muslim woman, and drawn by POC artist and Runaways co-creator Adrian Alphona. It’s just starting to really heat up right now, with one of Kamala’s friends being kidnapped and her going in for the rescue. For the first time she’s going in as a real superhero, doing her own thing. This is definitely my favorite mainstream superhero comic.

Written by Matt Fraction (who was writing FF and is married to Kelly Sue DeConnick) and drawn by Chip Zdarsky, this is a hilariously dirty comic. On it’s surface it’s about a young woman who, whenever she has an orgasm, enters a place she calls “The Quiet,” where everything else in the world freezes and she sees all sorts of lights floating around and can move around as much as she wants. After years of thinking she’s the only one like this, she has sex with a new guy and when she enters “The Quiet,” she realizes that he’s there too. Together, they try out all sorts of new things (both sexually and criminally). It’s also about sexual mores and shame, trying new things and being yourself. This comic is bizarre, riotously hilarious, great to look at and completely unlike anything else you’ll read.

There are some other comics I’m reading, but I prefer to read them in the trade paperback format. Those are Saga by Brian K. Vaughn and Fiona Staples, Hawkeye by Fraction and David Aja and Pretty Deadly by DeConnick and Emma Rios. As you can see, I’m a pretty big fan of the Fraction-DeConnick family and I tend to read a lot of their stuff. You can probably also see that I’m a big fan of comics about the women. So, how about y’all? Do you have pull lists? What’s on them? Do you know of any great titles I should add to mine?