I keep thinking that I’ve read all the best comic books and graphic novels this year, but when I got about a fourth of the way into Maggie Thrash’s debut graphic memoir Honor Girl I was genuinely surprised. I’m not exactly sure why I was so surprised — after all, I reached out to Candlwick Press because I had heard about this book and was immediately drawn to it. Still though, the book was so good that I found myself stunned at how much I was loving it. Honor Girl is my second favorite book of the year (after Jillian Tamaki’s SuperMutant Magic Academy). Honor Girl is a witch of a book in the best possible way. It put a spell on me. 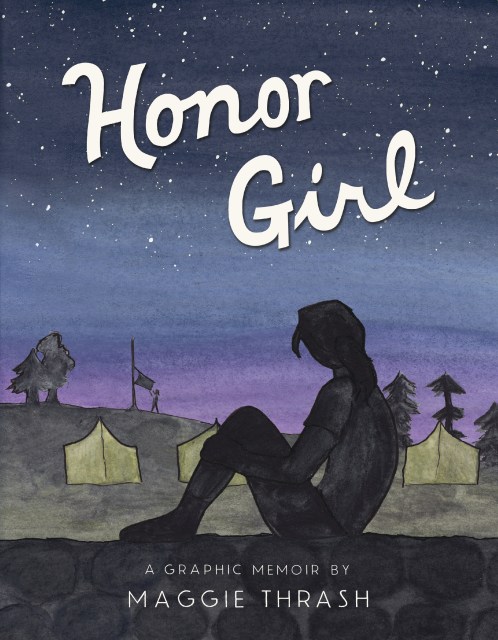 Honor Girl is a graphic memoir similar in some ways to the legendary Fun Home. It’s the true story of the author remembering a formative time in the development of her queer identity. It’s also similar in that it’s able to wildly successfully touch a nerve that not only girls who grew up having crushes on other girls will feel, but any reader who had confusing feelings as a teenager will be awkwardly familiar with. In simple words, Honor Girl is about the then 15-year-old Thrash’s time spent at “Camp Bellflower for Girls, set deep in the heart of Appalachia,” where she became a top shot at the camp’s rifle range and a pariah for developing a crush on Erin, a 19-year-old female counselor.

I fell in love with this book the way Maggie falls for Erin — one single touch and I was ruined for the rest of the summer. For Maggie that touch was when Erin checked her hair for lice; for me, that touch was on page 36 when Maggie and her team dress up as the Backstreet Boys for the camp talent show and perform to “I Want it That Way.” Young Maggie Thrash doing a drag performance at camp before she even knew she was queer is like, totally the coolest thing ever. Once I saw that I couldn’t help but be obsessed with this book. I wanted to devour it, and I did, finishing it as fast as I could.

Even though falling for a camp counselor isn’t necessarily something we all did, the overall message of the book is something we all know. “I think that as a kid, you grow up one of two ways: either someone close to you dies, or you fall in love,” Thrash says, “in either case, you’re suddenly slammed with these completely intense and bewildering emotions. You’re looking for an answer, and realizing that there isn’t one. It’s a universal moment.” Being slammed with completely intense and bewildering emotions is especially relatable for those of us who realized we were queer at an early age. Thrash perfectly captures the mixture of excitement and fear that someone will find out and your life will be forever different that is such a memorable part of being a young queer person. 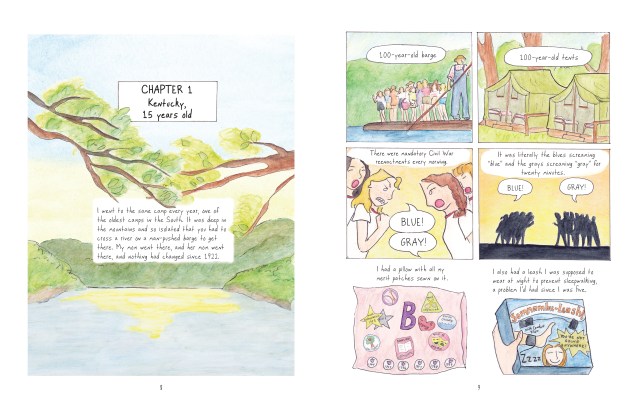 The camp setting is also a part of what will make this book resonate with so many readers, and a part of the reason why it will especially resonate with female readers. Thrash said that she thinks “it’s so important for girls to go outside. So much of being a girl in this society is about people trying to CONTAIN you. When I think about camp, I get this gut feeling, remembering the sky above my head. No walls, no parents. During the school year, you’re just trying to survive. Camp is a chance to be someone freer — an actual person.” For Honor Girl, the camp not only provides an environment where Maggie and Erin are stuck together, but it also informs their relationship — Maggie’s a camper, Erin’s a counselor — and it gives us the B story where Maggie is trying to distract herself by becoming the top shot at the camp’s rifle range. Perhaps most substantially, it puts Maggie squarely in a world where falling in love with another girl is strictly forbidden.

When Honor Girl is fun to read, it’s really fun to read. Maggie does awesome things like writing a letter to her brother that reads in part “can you help me with a math question? I’m having same-sex tendencies, and this will help me determine if they’re for real,” cutting her own hair and sleepwalking. She’s exactly the type of girl I would’ve wished I was friends with in high school. As a reader, your heart just begs for things to work out for her, for her to not have to be afraid, for her to be able to be who she is. Erin really is written in a way that it makes it hard to not fall for her, even when she’s trying to avoid acting on the feelings that both she and Maggie have for each other. Honestly, when Erin compliments Maggie’s attempt at telling a fun fact (which is that one summer a girl drowned at camp and she haunts it to this day) by telling her that she wishes more people would tell ghost stories in the middle of the day I thought it was the most endearing thing I’ve ever heard.

When Honor Girl gets harsh, it gets really, really heart-breakingly harsh. Maggie goes through emotions and has her fellow campers tell her things that I’m sure many of you who realized you were queer as a teenager. She feels like a pervert and a creep for wanting to be able to just have minimal physical contact with Erin; her face turns into a “full moon of panic” and thinks that she’s doomed when her friend tells her it’s obvious who she has a crush on and ultimately, she’s made to feel that who she is and who she loves makes her a genuinely bad person. All of this ugly homophobia (both from external sources and internalized) reaches the height of it’s ugliness when Maggie is told by one of the counselors that “parents don’t send their girls here to frolic around in your lesbian fantasy,” and that the camp is a place where “girls can be totally innocent and free” and she shouldn’t “ruin it for everyone.” Thrash did such a great job of writing this scene; I had a visceral, disgusted reaction to it. I thought I was going to throw up. It was like I could hear the voices of the pastor at my old church who told me that they would have to have some serious meetings with the parents before I would be allowed to work with the youth again after I came out. 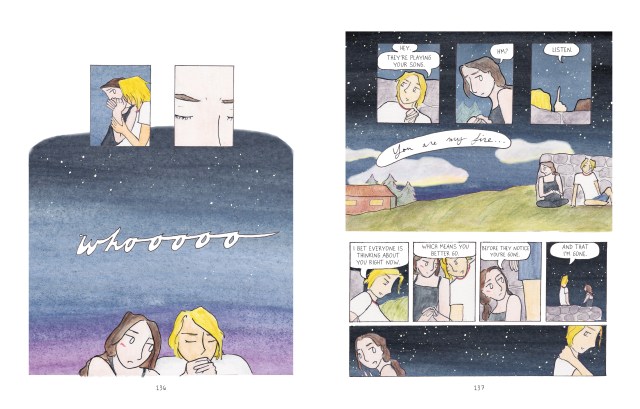 Thrash told me that when she decided that she wanted to tell this story, telling it through a graphic novel was a natural choice.

I tend to be really unnatural and awkward when I’m talking about myself. Some people are great at it — Tavi Gevinson is an example — but for me I always feel like I’m ‘explaining’ myself, I get overwhelmed by the futility of trying to connect, and I end up feeling more alienated than I did in the first place. Comics were a revelation to me. When you’re drawing yourself, there’s no bullshit. You can get out of your head. You zoom out of your perspective, and you can see yourself really honestly and objectively.

This honest and objective look at Thrash’s adolescence is exactly the kind of book I needed to help bring the summer to an end. Thrash has previously had her writing published on Rookie and has a few comics and some fiction that she’s written up on her website, but knowing that this is her first book makes me infinitely excited to see what’s to come. If this is her first attempt at writing a full graphic novel, I can’t even imagine how good she’ll be once she’s more experienced.

Honor Girl by Maggie Thrash comes out in stores today, September 8, make sure you go out and pick it up. There are so many wonderfully amazing parts of the book that I didn’t even begin to touch on here. As for whether or not Thrash still loves BSB? “Oh definitely,” she told me, “boy band love is a love that never dies. My favorite BSB song is actually not “I Want It That Way;” it’s “The One.” It sort of reminds me of the Neverending Story song. Their new album (In a World Like This) was a fairly valiant effort, especially the song “Soldier.” The lyrics are kind of patriarchical and glorify the military, but it’s super energizing! I’ve choreographed a whole dance to it in my mind.”

Make sure to keep voting for the Autostraddle Comic and Sequential Art Awards!