Sometimes I wonder if the reason British people have a reputation for being so stoic — for keeping calm and carrying on, for smiling self-deprecatingly as Paul Hollywood verbally eviscerates their ciabatta and cracking a joke as Mary Berry stares through their soul and points out their pastry has a soggy bottom — is because they subject themselves to the most horrifying facets (quirks?) of humanity in their comedies. And so everything else is rosy by comparison. Anything would be better, for example, than living as a fictional character in one of Julia Davis’ imaginary worlds. You might know Davis from her 2004 dark comedy Nighty Night; or from Camping, her TV series that’s recently been remade for American audiences by Jennifer Garner. If not, you’re going to get to know Davis exceptionally well in her new queer show Sally4Ever, which premiered on HBO last night and made me say, “Whaaaaat is happening” out loud at least 47 times. 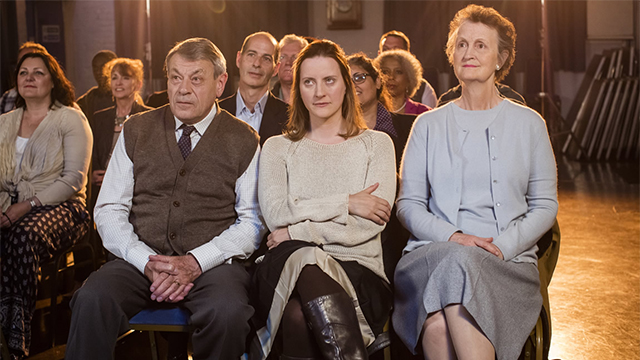 The more I know of the world, the more I am convinced that I shall never see a man whom I can really love.

Sally4Ever‘s set up is a tale as old as time, really: A middle-aged woman named Sally (Catherine Shepherd) is trapped in a loveless, sexless relationship of ten years with an underachieving partner who sings adult a capella, grooms himself quite grossly and publicly, thinks a fun way to spice up their relationship is to pretend to be an intruder who grabs Sally and pretends to assault her the second she walks in the door from work, and follows that trauma up with a groveling marriage proposal. Sally hates David, hates her job, hates the fact that everyone she knows is telling her she’s running out of options for a husband and for having kids, hates her whole life. One day, though, on the Underground, she makes eye contact with a woman, picks up a flier for a performance by the woman’s band, and sneaks out in the night to see her.

The woman is Emma (played by Davis). She’s a spark in Emma’s darkness, something unknown and vibrant and alive. She doesn’t work a nine to five at an ad agency that, like Sally’s, is trying to find a way to make eggs sexy. No, she’s an actor and a musician and a lesbian! Sally makes out with her that first night, and her life is changed!

Turns out, actually, that, like everyone else in Sally’s life, Emma is kind of a monster. She’s sloppy and narcissistic and insecure and demanding and desperate and also maybe a sociopath. But of course, at their second meeting, Emma asks to move in with Sally and Sally agrees. Because Sally’s entire thing is just letting life happen to her. It’s easy to see why Sally is so immediately and wholly taken with Emma, and it’s also easy to see that Emma is going to make Sally’s life a fresher hell. 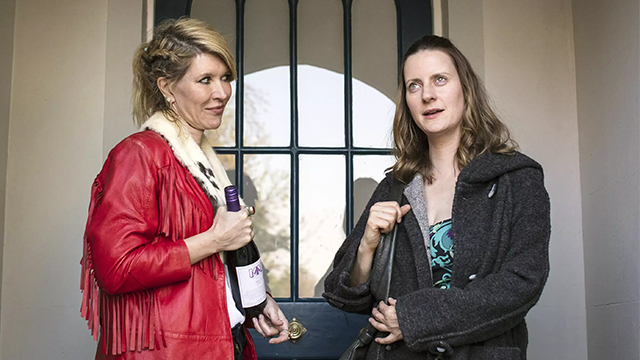 I have not wanted syllables where actions have spoken so plainly.

It’s honestly impossible to overstate just how hilarious and (literally, physically) cringe-inducing the comedy is in Sally4Ever. I even had to watch the sex scene between Sally and Emma behind my hands, which were covering my face. A used tampon, for example, is ripped out with a mouth. There’s also toeing.

Now, I am neither British nor a Sally, so I can’t really speak to the accuracy of this representation. Luckily, such a person does exist! British Autostraddle contributor Sally — who has written such lauded pieces as Lesbian and Bisexual Women of History Who Were Obsessed With Their Dogs and a history of queer British suffragettes (including an Alice Pieszecki-style chart of who was sleeping wth whom) — offered her services as Chief Sally Consultant to discuss Sally4Ever. I asked her to speak about whether or not this series is a fair and honest look at what it’s like to be a queer Sally in Great Britain. She responded thus:

The major deviations I found to the Sally experience are, in order of importance (with 1 being most important):

Regardless of whether you are a Sally or not, everyone is prone to bouts of inertia. But remaining in a sexless relationship for ten years with a man who thinks masked assault is a good way to spice things up and pleads for you to wear his mum’s gland-stained wedding dress? I would expect a Sally to have enough self-respect to kick him out sooner.

As we follow Sally through her queer nascence, she displays an alarming level of pro-activity and under-thinking. Approaching another woman without spending months pining / stalking / making invisible signals to determine whether she may or may not be queer / available / into you is just a step too far out of reality for me. However, she does move in with her new gf instantly, which is a total lesbian move, so the jury’s out here.

I want my Sallys to be astronauts, or Oscar winning actresses who everyone really, really likes. I don’t want my Sallys to be producing mediocre marketing campaigns for one of my favourite foodstuffs – egg DJs, really? Please note I am currently writing this while at my own job, so I am not sure I’m meeting my own standards here.

I recall that Autostraddle has already established that toeing is not a thing. Sallys can do a lot of things, but they can’t make toeing happen.

1. Repeat eye-contact on the tube

We can tell the series is firmly rooted in fantasy, because Sally’s attraction to Emma is ignited after catching her eye multiple times on the tube. This simply does not happen. Sure, you might accidentally make eye contact once, but the correct reaction to this is to stare intently at the floor / tube map / anywhere that is not another human being’s eyes while cursing that such an embarrassment has befallen you. This is an undisputed rule for everyone, regardless of their name.

Who, then, is the most accurate Sally?

If we’re trying to populate a Sliding Scale of Sallys, then the Best Sally on TV is Sally Solomon on 3rd Rock from the Sun, who has the kind of peerless intelligence, heightened sexuality and tendency toward violence that I can really get behind. Obviously, the Most Terrible Sally on TV is Sally Webster offa Corrie, who has only done one thing right in her life, which is birth a lesbian. Sally4Ever is definitely closer to the Webster end of the spectrum, but I am optimistic that she can turn things around to live her best fictional Sally life.

Sally of Sally4Ever may not be he most likable fictional Sally, but she is definitely the most likable character on her show. Which isn’t saying much, really. Julia Davis seems to thrive on asking over and over, “What’s the absolute worst possible thing a human could do in this scenario?” And then writing and directing those actions in the funniest and most grotesquely bananas ways.