It’s almost impossible these days to sum up the fullness of a TV show — plot, characters, mood, writing, etc. — in a single sentence, but I can do it with HBO’s new Jennifer Garner-helmed series: Camping is an American adaptation of the same-named British comedy about a group of married Gen-Xers who spend a weekend being jerks in the woods, executive produced by Lena Dunham and Jenni Konner. (I felt you shiver!) Camping also features a lesbian campsite director named Harry, played by Bridget Everett, who refers to herself as “daddy” and refers to her gun as “my piece” and refers to her wife as “the ass that slaps back” and isn’t a doctor but doesn’t mind stitching up a fallen camper, or letting an eleven-year-old take over the needle and thread when she gets bored.

Lots of critics are saying Camping is really just Girls on a ranch — but two things that make that untrue. Number one, there are actually people of color in the main cast. Number two, these dillholes aren’t entitled, self-involved 25-year-olds who have no grasp of the world outside of Brooklyn. What makes critics juxtapose Camping and Girls (besides Dunham) is that the main protagonists are thoroughly unlikable, deeply narcissistic women. Don’t get me wrong: None of Kathryn and Walt’s friends are chill, fun pals; they’re just not as insufferable or unwatchable as the characters on Girls. 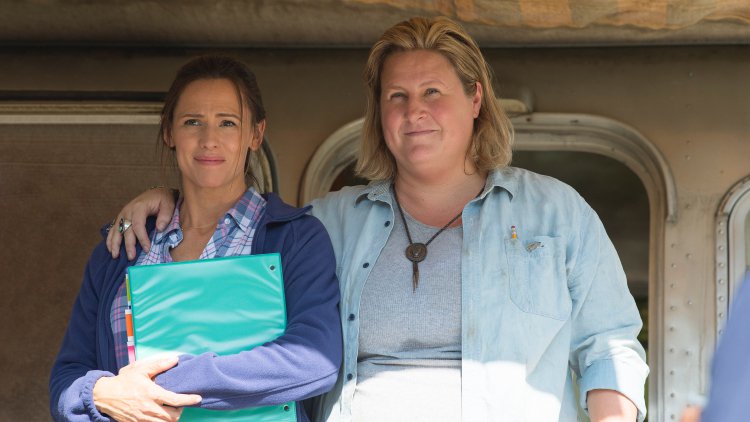 There’s no TVs or wifi out here so I hope that bider’s full of fan ficiton.

To wit: Garner’s character, Kathryn, has planned this trip amongst friends to celebrate her husband Walt’s birthday. She brings her own kid, but tries to send her sister home with her step-daughter because the e-vite clearly stated that no children are allowed. She has a compromised pelvic floor due to a hysterectomy (“I almost died; vitamins saved my life”) so she takes everyone else’s mattress pads before they arrive. She wants to make up with one of her friends she’s hurt, but really what she wants to do is pose together with some bacon by the campfire and snap an Insta pic. She refuses to budge on her itinerary, which she obviously keeps in an enormous three-ring binder. She gossips about one of their friends leaving her husband and is furious to find out everyone else already knows. Also she shoots her friend in the dark with a BB gun because he sounds like a bear. (He’s just having sex with Juliette Lewis’ Jandice; the funniest character in the pilot).

Anyway, it’s way less like Girls and way more like The Big Chill meets UK’s The Office. It would appear that everyone is going to get worse and worse, that everyone’s shit will ultimately be laid bare, and that an actual bear will wreak havoc and someone with one of Harry’s much-proffered BB guns will save the day. Everyone’s there, in their own way, for Waly (played dorkily by David Tennant, by the way) and they’re just trying to deal with the fact that he’s married to a woman they all hate. 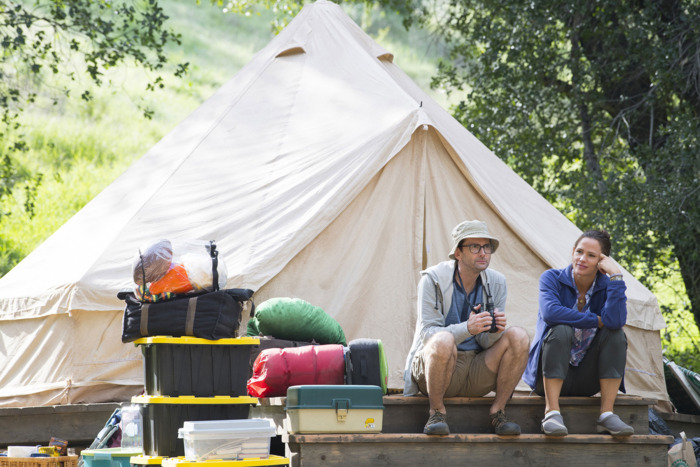 Something in the air. Something’s coming. A storm’s approaching…

Harry is genuinely the most enjoyable character on the show. “A fun-loving, larger-than-life sweetheart,” is how Everett described her to Out. The only likable character in a cast of very unlikable characters, which, I admit, is a nice change of pace. It’s also neat to see a character made from Melissa McCarthy’s Bridesmaids mold revealed as an actual lesbian, and not a coded one. And while her nonchalance and general disregard for any kind of safety or rules is going to surely make Harry a foe for Kathryn throughout the season, the main problem with Harry is that she’s just not around enough to make up for everyone else’s assholery.

Did you watch Camping? What did you think? If you want to keep up with Harry, you’ll find season-long updates in our weekly TV roundup column, Boobs on Your Tube.