Okay, so we fell of the face of the earth for a good month there. I’m so sorry! By now, the exhibition in person is gone (and by gone, I mean in a tube in my closet) so this here website is the only place you’ll see it ever again. Savor that exclusivity. Mmmmmmm, privilege.

Anyway, here are the next two photos for you all. We’ve been really busy on other projects and I just kind of got too exhausted to crawl into my memory banks for awhile there, but I remembered the stories as best as I could. 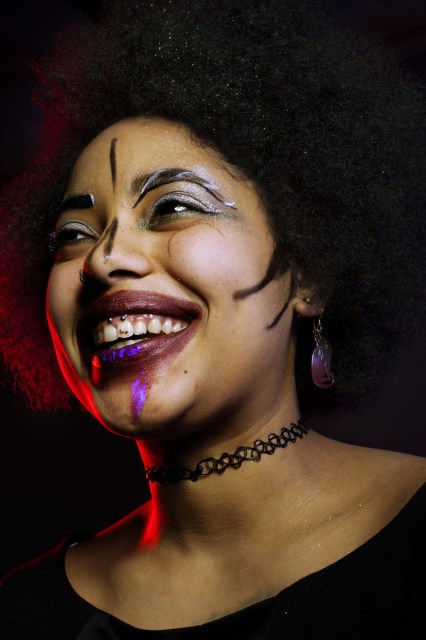 Massiel’s portrait was really about the pursuit of perfection despite basic human flaws. It was about not feeling good enough, about not being skinny or educated or successful enough. She felt really self conscious about body weight, about her round face, about the impossible ideals we see everywhere. So her portrait was pretty simple. Instead of making it very messy and colorful, I wanted to focus more on highlighting the history of symmetry in makeup and faces. You know the phrase “sisters, not twins” regarding eyebrows? I wanted to take that to an exaggerated extreme. One side of her face is pretty simply done, the other is the one with the lines accentuating the curves of her face. Meta-human experiments in color and form. It’s not neat, it’s more like the beginning of a draft of something that is meant to be perfect. I like that. I love the shape of her face, and her smile is the warmest thing I’ve ever been witness to. So it was important that she wasn’t an angry terrifying Monster of a discovered Ugly. She actually deals with the anxiety of her Uglies on a daily basis. For her, it was more about remembering perfection isn’t the point.

You can confront and manage your insecurities by acknowledging the hold they have on you, and warping them. I guess that is considered ironic, some kind of camp humor, but really I just think it’s the best way to manage things. Massiel’s portrait is about how she deals with her private ills, and the freedom that can come from speaking about them. You’re not your illness or your victimization. These are just things you have to deal with. Dealing with them can be messy, but it doesn’t mean you can’t be free.

I used that lip gloss, that purple holographic, because I knew it would look great on her, but I wanted it to look like she just ate some futuristic fruit and she was so happy about it she didn’t bother to wipe her face. The glitter in her hair looked like a halo in the dark. After the portrait she told me she planned on sprinkling glitter in her fro on a regular basis.. She couldn’t stop smiling.

Talking out your Ugly can make you feel very beautiful. I don’t think my particular definition of beauty has much to do with outward reflections of desire. By beautiful, I just mean free. 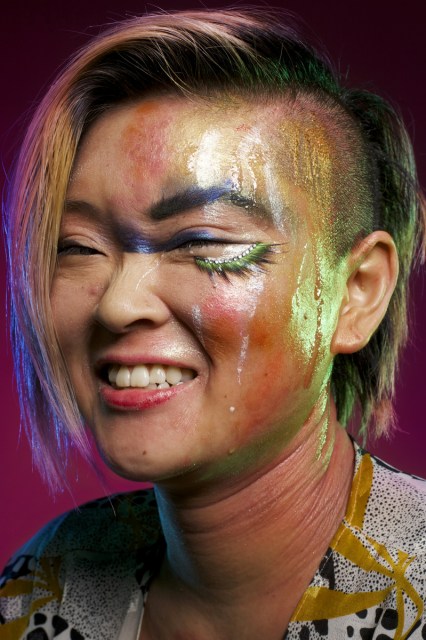 Coco’s portrait is SOOOOOO gruesome, I wince looking at it, but I think that means we did a good job. You can almost feel the tackiness of her skin, the gloss sliding slowly down her shaved skull. Her portrait was wholly about her anxiety about her eczema — I pulled it out and blew it up to the point where we were all wincing in delight and horror.

Coco’s a California girl at heart but she’s on the East Coast for school. On the east coast, she’s constantly battling her eczema, which isn’t something she struggles with at all when she’s back home. Something about the air and water here just doesn’t suit her. And it frustrates her, it just adds to the pressures that come with living in New York City. We’ve got enough beautiful girls who want to make it, who have to, that to have your beauty mangled into something your body fights with you over is just insult to the injury of New York City. She goes through some lengths to tame her angry skin, with humidifiers, overnight creams and masks, gallons of water every day. She’s really good at it, and has a perfect foundation and brow routine so she looks like this untouchable pale porcelain goth doll of a thing mostly. She plays it up by wearing black all day every day, and she hardly ever smiles. But sometimes she forgets herself, and she wipes her brow and off comes an eyebrow. So we messed up her eyebrows as sort of a joke to this habit of hers. We washed her in different colors, anything but black and red, the classic colors of feminine allure. None for her, not now.

This is not how skin is supposed to look like, and that is not the happy complacent smile of an Asian American girl you want to fetishize. Not at all. You can’t really tell if she’s smiling or glaring, if she’s really happy or in some kind of pain. It was both! It always is in the best of times, for her and I.

It’s not a pretty picture of glitter and gloss the way these things are supposed to be used. It’s hard to look at, really, I’ve been putting off looking at it myself. But I think that makes it really potent.