Since it’s officially All Hallow’s Eve Eve, I thought I would focus on a comic that’s a little spooky. And there’s nothing spookier than monsters, right? Well, I guess there are a lot of things spookier than the monsters featured in queer comic creator Maya Kern’s Monster Pop!. Monster Pop! tells the story of two best friends who are freshmen students at Unity University, a college where monsters and humans can live and learn alongside each other. Last week I visited another school with some monster students, but where that one was full of existential crises and absurdity, this one is full of style and sunshine. Now, that’s not to say that Monster Pop! is shallow or meaningless. It’s actually full of well-developed characters who each have unique voices and perspectives and who each are going on compelling journeys through their first year of college.

The main character — and the character whose blog this is — is George (short for Genevieve). She’s a cute and optimistic, if somewhat immature, cyclops. George can’t wait to get to know all the new people she meets and is so outgoing and focused on making friends that it sometimes gets her in trouble. Her best friend is the more grounded, but still super chic and lively witch Franny. Franny is something of a prodigy and is also more mature than George and helps to keep her out of trouble. Since this webcomic is sometimes interactive, some of the panels are animated, there is some music associated with the comic, and the main characters have their own blogs that you can read and send in questions to. In the background scenery and with tertiary characters, we get to see the diverse range of monsters that exist at Unity University. We see mummies, alligator monsters, My Little Ponies and even one character named Tiny Minaj, who, you guessed it, is a tiny version of Nicki Minaj. Kern makes sure that no two characters look the same. They’ve got a variety of body types, heights, ethnicities and personal styles. 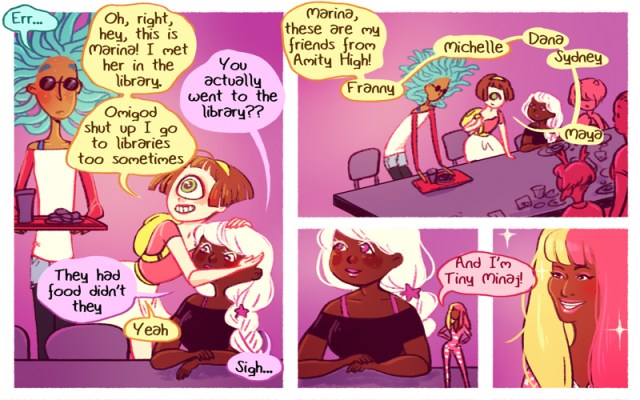 In this universe, although they coexist together in the same countries, monsters and humans are often segregated. There are some cities that are monsters-only and some that are human-only. For a lot of people, there’s also a large amount of hatred and ignorance between the two groups. The first chapter focuses on this when our protagonist experiences it first hand. She tries going out on a date with a human she has a crush on. At first, he thinks George is a human, thanks to a magic hat that Franny made for her, but when he finds out that she’s really a cyclops, he freaks out and reveals his true scumbag nature. This storyline does a good job of setting up both the world that the characters live in and the different perspectives that the characters have.

When George and Franny start their college life in chapter 2, a few more characters are introduced into the regular cast. First, we have Marina, a gorgon who calls the snakes that are her hair “sweeties.” She’s a lot more nervous and shy than either George or Franny, but they pretty quickly add her into their friendship group. There’s also Percy, an Asian-American human student who grew up in a human-only city but doesn’t hold any anti-monster biases. He’s kind of quiet, kind of nerdy and pretty darn dapper, and he’s got a budding relationship with Franny. 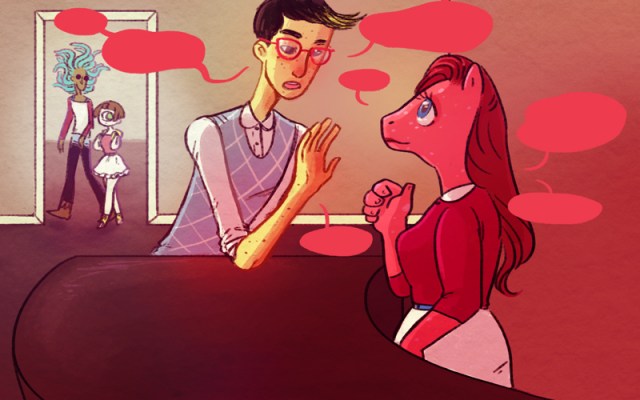 There have been some hints that multiple characters in the series are queer, and those hints are confirmed when you look at the tumblrs that the characters themselves have. On the main character George’s tumblr, she received an ask wondering if she was attracted to women or just men. She replied by saying that she is not just attracted to men and women, but is “attracted to every gender along the spectrum.” Another character, Marina, was asked a similar question on her tumblr. When she was asked what her orientation is, she answered by saying “I like girls” and later reiterated that she is a lesbian. Several characters also come from families with queer or poly parents. There are other characters who might fit under the LGBTQ umbrella, but their identities have only been hinted at so far. 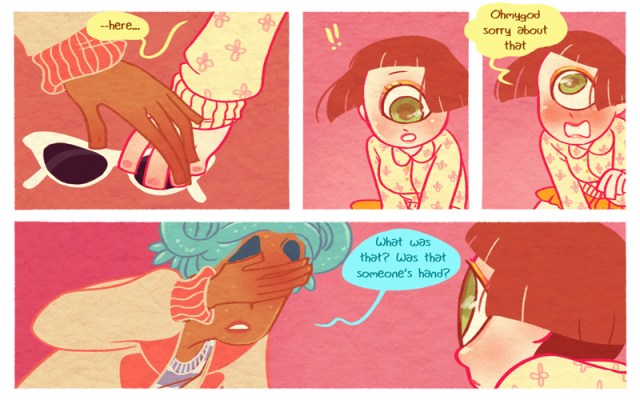 Even though it sometimes deals with more serious storylines, Monster Pop! keeps its light and bubbly mood due in large part to its art style. You can definitely see manga, and especially shoujo influence. George’s one large eye and cute outfits would easily fit in with the girls of Sailor Moon or Puella Magi Madoka Magica. Additionally the bright, yet soft lines and colors make it look almost like it was painted onto the computer screen. Overall the comic has a very cute and youthful feel — perfect for a webcomic about two best friends starting out at college.

Maya Kern is quite the prolific writer/artist. She has already finished several comics including Redden, How to be a Mermaid, Fairyfail and The Little Robot Girl. Kern’s other comics usually have female leads, often have queer storylines and sometimes will break your heart. She also has a store where you can buy buttons and postcards featuring her art. Monster Pop! updates twice a week on Wednesdays on Thursdays, and you can either check it out at it’s official website or you can follow it on tumblr.