It seems like just yesterday that we were living in a world without Carly and Robin dressing up as Gomez and Morticia Addams for Halloween, and the idea of starting an international campaign to convince them to do so was barely a twinkle in my eye. Today, we proudly present to you proof that anything is possible if you just dare to dream, and also if you pressure your friends into doing something they expressed exactly zero previous interest in doing in a very public way. How far we’ve come today, not only as readers of a website but as movers and shakers, purveyors of truth and creators of change.

Here’s something you should know about Carly: the woman knows more about drag queens than most drag queens, and she’s got an astounding eye for detail. Robin makes her living as a professional photographer, and a lot of her friends are stylists and makeup artists. When our mighty Change.org campaign closed, we had over 500 signatures from all our friends and relatives, encouraging Robin and Carly (official Queens of Halloween) to bust out their best Raul Julia and Anjelica Huston. Carly’s first step was to solicit the assistance of her Drag Race comrades, and that is when I knew for certain that this was going to be the greatest photo shoot in all of Autostraddle history.

Robin later explained, “Halloween is kind of our thing. Its our favorite holiday and every year (except for the last year since we planned our wedding during the month of October) we’ve thrown a HUGE Halloween party and spent much time and energy on costume/party prep. If we can’t do Halloween right, we don’t want do it at all!  This year we weren’t sure we had the time to put into making it truly perfect. So when this petition was thrust upon us, we were excited that we might have to strategize and come up with iconic looks. We shopped ebay and vintage stores. We called Christina Natale in to do our makeup and Elisabeth Millay to take pictures. The four hours I spent in the makeup chair and the four days it’s going to take Carly to get that wax out of her hair have been totally worth it.  We hope you enjoy the results!”

To thank Robin and Carly for their fearless and continued commitment to excellence, I threw together this mildly ridiculous cover of the original Addams Family TV show theme, which you can listen to as you browse through their photos. 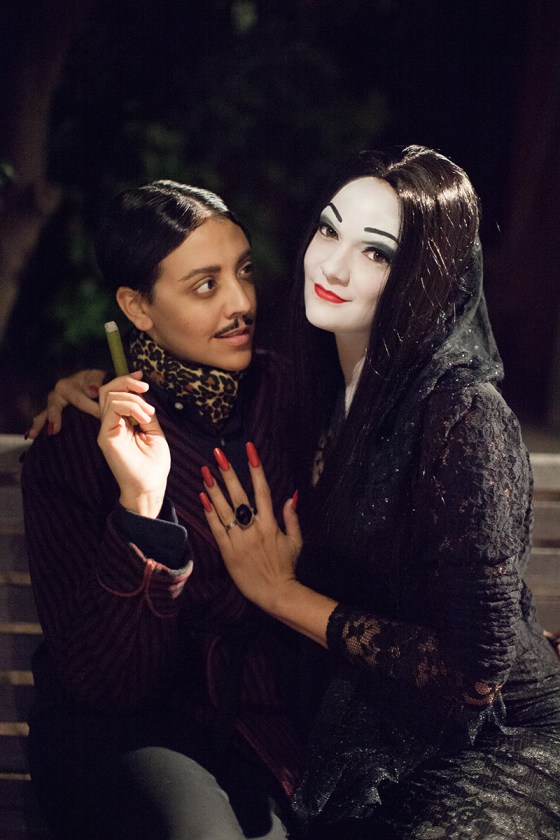 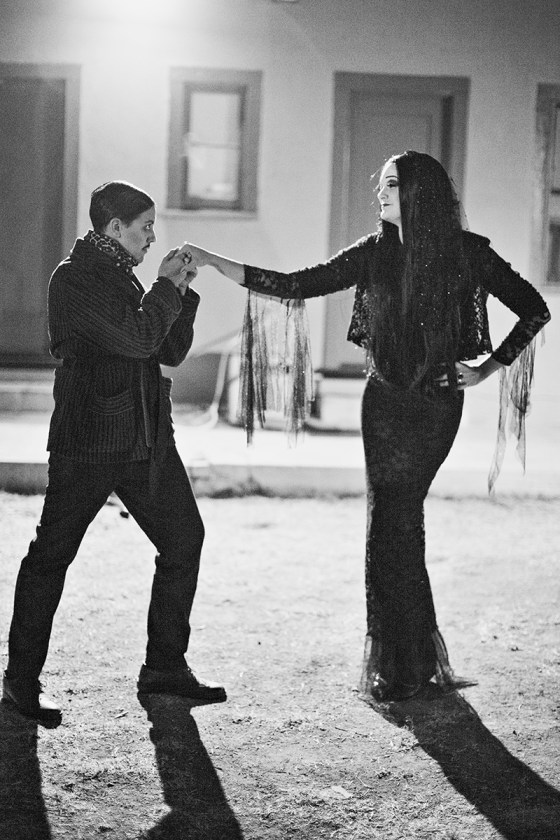 Last night you were unhinged. You were like some desperate, howling demon. You frightened me. Do it again! 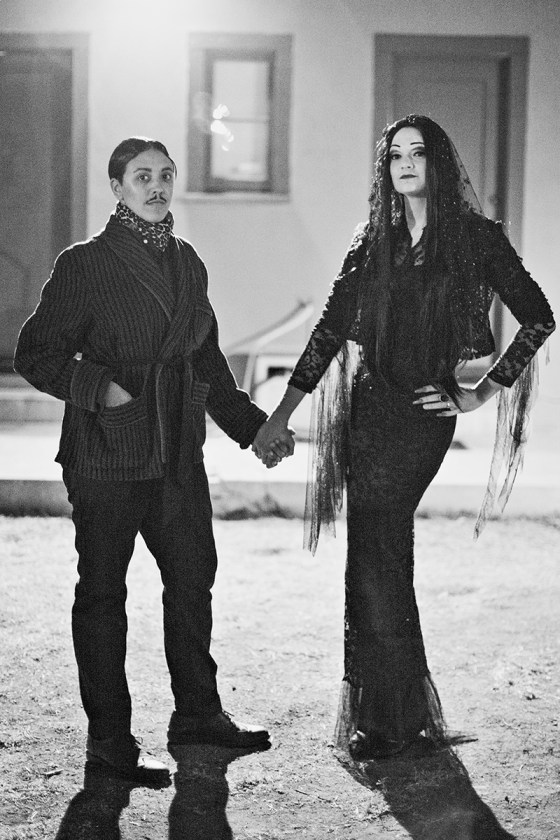 “Sic gorgiamus allos subjectatos nunc.” We gladly feast on those who would subdue us. 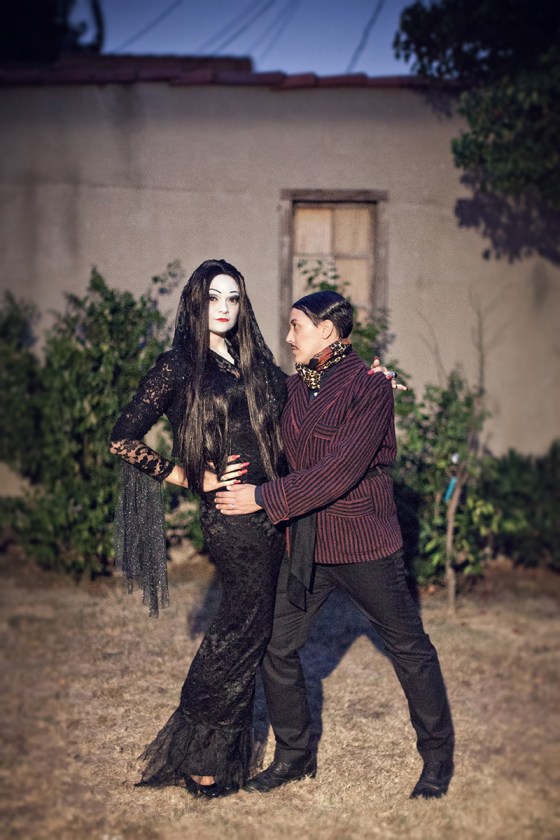 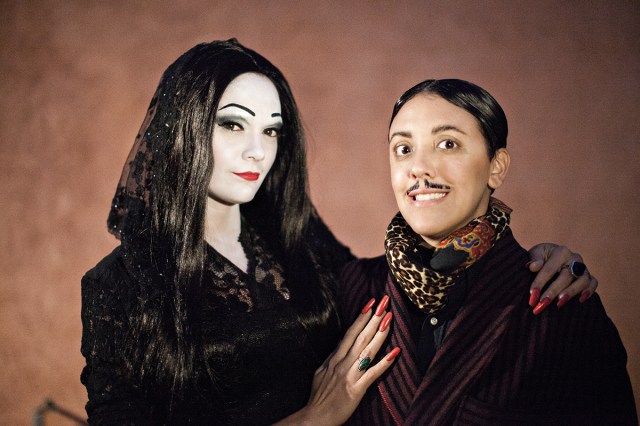 gomez: how long has it been since we waltzed?
morticia: oh, gomez.. hours. 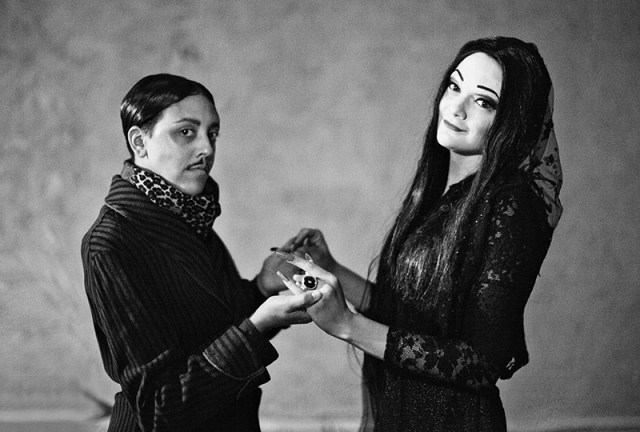 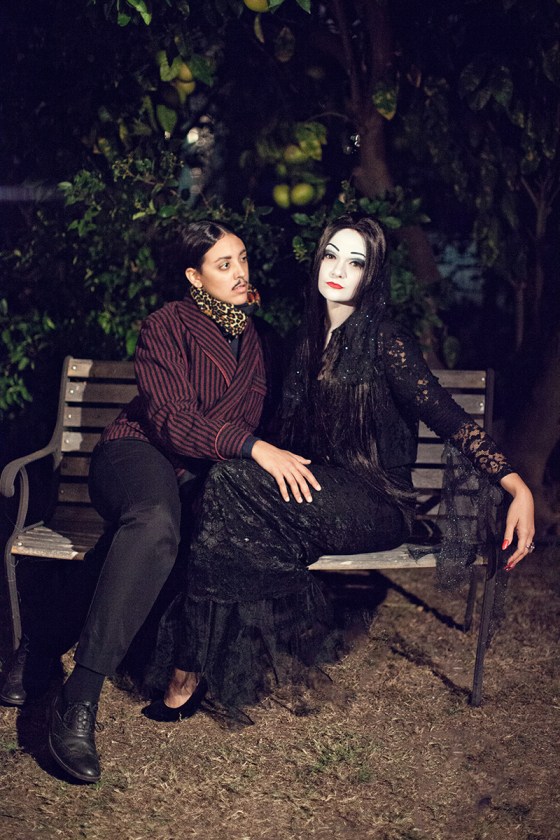 I’m just like any modern woman trying to have it all. Loving husband, a family. It’s just, I wish I had more time to seek out the dark forces and join their hellish crusade. 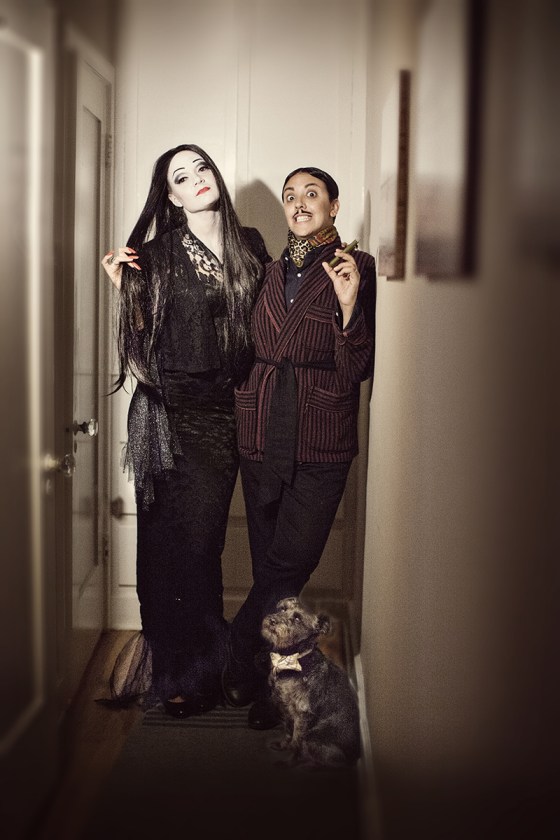 I would die for her. I would kill for her. Either way, what bliss.

Carly also sent along some behind-the-scenes photos, so we can all appreciate the time and effort they spent in the name of serving you, their country, and their community. Isn’t Christina Natale the best makeup artist of all time?

Once again, we cannot thank you enough for signing the petition and making our Halloween dream a reality.  I can’t wait til next year, when we picket in the streets for Rachel, Laneia and Riese to dress up as the Sanderson sisters and sing “I Put A Spell On You” via YouTube.  Happy Halloween!