Jillian Tamaki’s SuperMutant Magic Academy is weird. It’s not just weird, it’s often times so completely bonkers and out-there that it leaves you a little shell-shocked. And believe me, that is a huge, huge compliment. Even though this is ostensibly about a bunch of people with superpowers, Tamaki admits that she doesn’t really have much experience with that genre and instead spent her time reading “Archie comics and strips like Calvin and Hobbes, The Far Side, For Better or For Worse” and that history creates a totally unique experience that is all at once totally surreal and completely relatable for anyone who went to high school. I don’t know if I’ve ever seen a simple black and white webcomic that has had the kind of effect on me that SuperMutant Magic Academy has.

You might know the writer and illustrator from her books Indoor Voice and Gilded Lilies or from Skim, the classic queer comic book that she wrote with her cousin Mariko Tamaki. Here she presents simple, short slice of life comics about the students and, to a lesser extent, faculty at the eponymous SuperMutant Magic Academy. As the name suggests, some of them are mutants, some have super powers, and some have magic. However, despite their powers and sometimes inhuman appearances, these characters are very much regular teenagers. They have unrequited crushes, they challenge their teachers’ authority, they blow off homework and they try desperately to figure out just who they are as people. These interactions and character developments range from being bizarrely hilarious to absurdly deep and philosophical to moments that are so heartbreaking that I’ve had to close my computer and take a break from the using the internet for a while.

Even though the comic focuses on a very wide range of characters with a wide range of “superpowers,” it seems more like diary comic than a superhero comic. I put “superpowers” in quotes because some powers seem to be completely useless or even detrimental to the students. There’s a boy who has an extra mouth that appears in the middle of his stomach, a new student named Ephemoros who is introduced at the beginning of class as having a lifespan of only one day and even one mysterious student who appears to just be a house cat wearing the school uniform but who will apparently “play a pivotal part of a future epic battle between the forces of good and evil.” Not only do a lot of the powers and mutations seem pointless, but Tamaki treats them that way. A huge portion of the strips basically ignore that the students can fly or turn invisible or have magic wands and shows them going through regular teen angst and emotional upheavals. 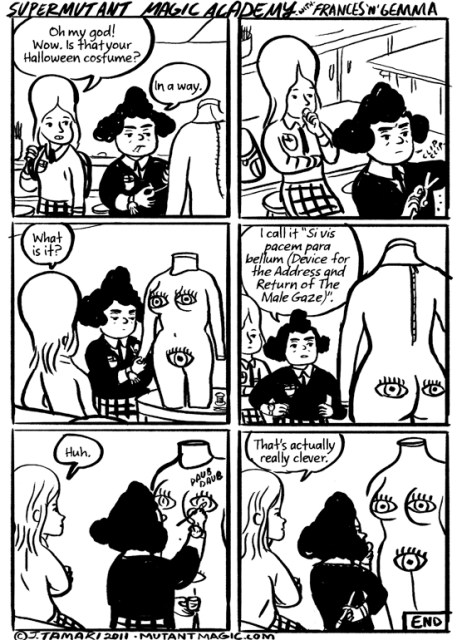 In the huge cast, there are some students who stand out. One of my favorites is definitely Frances. Her hobbies include performance and guerilla art, hanging out with her friend Gemma and dismantling the patriarchy. She has a no-nonsense attitude and totally reminds me of some of the people I knew in high school who were on the Debate Team. Another impossible-to-forget character is Everlasting Boy. As his name suggests, he seems to be some sort of eternal being who exists as a teenager outside the realms of time and space. A warning, though, some of the comics involving him portray some pretty intense body horror (even though the art style is far from realism). The comics starring Everlasting Boy take the existential themes and strangeness of SuperMutant Magic Academy to levels that you are unlikely to find in any comics, let alone a short diary style webcomic like this. 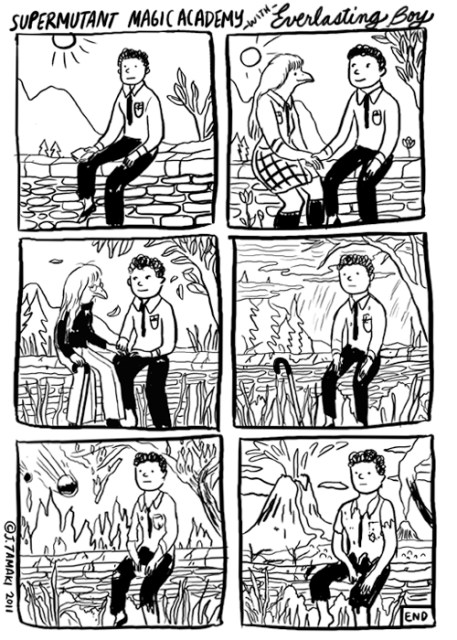 However, my absolute two favorite characters have to be Marsha and Wendy. Marsha has glasses and a haircut as short as her patience for the other students and the school as a whole. The one student that she seems happy to put up with is her popular and girly half-fox best friend Wendy. In case you didn’t guess it, one reason Marsha is so devoted to Wendy while she is so scornful of so many other students is because she has a Big Lesbian Crush on her. And boy, does Tamaki know how to write an unrequited high school crush. The comics with Marsha and Wendy are sometimes so cute and touching that your heart melts and other times so awkward that they cause all the embarrassing things you’ve done around your secret crushes to come flashing before your eyes. 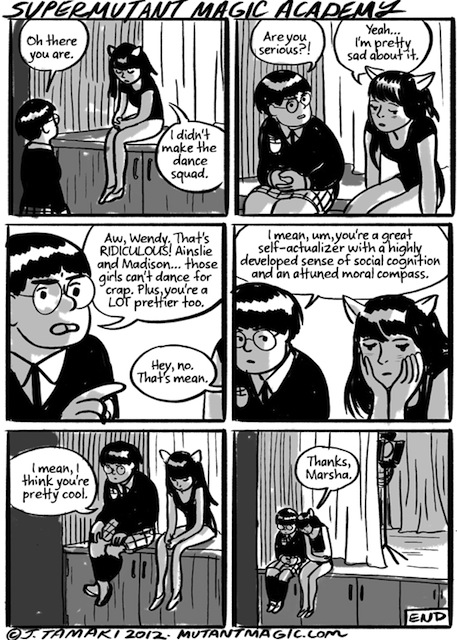 When it’s not punching you in the gut with a fist of emotions, SuperMutant Magic Academy has a great sense of humor. But the jokes aren’t always right in front of your face. Instead, the jokes often come from esoteric references or in the pause that exists right after the last panel. Other times the humor is so dry that it gets caught in the back of your throat and you can’t help but laugh as you choke on it. Still other times the humor comes from the simple absurdity of it all. If you can’t laugh at an entire gym full of basketball fans carrying a cat who got his head stuck in a bag of popcorn, what can you laugh at?

Tamaki started this comic all the way back in 2010. Although there isn’t a regular update schedule, you can usually find new comics on tumblr at least once a week. She is selling a poster featuring my favorite pair of best friends best friends/hopefully soon to be couple Marsha and Wendy and says that she is working on a collected edition of SMMA, although because she is currently working on another book with her cousin (the same one who wrote Skim, the SMMA book won’t be out until Spring of 2015. In the end, even if you don’t normally like superhero comics, you’ll still love SuperMutant Magic Academy. It’s really just a story about a bunch of weird kids who pick on each other, go through puberty, fall in love, don’t want to grow up and can’t wait for school to be over, and that’s a story that almost everyone can relate to.