I’ve been reading comics of one kind or another since I was a kid, but the first webcomic I ever read was Kate Beaton’s amazing, informative and highly influential Hark! A Vagrant. It made me fall in love with a whole new form of comics. When I picked up a copy of Beaton’s latest book of Hark! A Vagrant comics, Step Aside, Pops, now available in bookstores and online, I was reminded exactly why I fell in love in the first place. 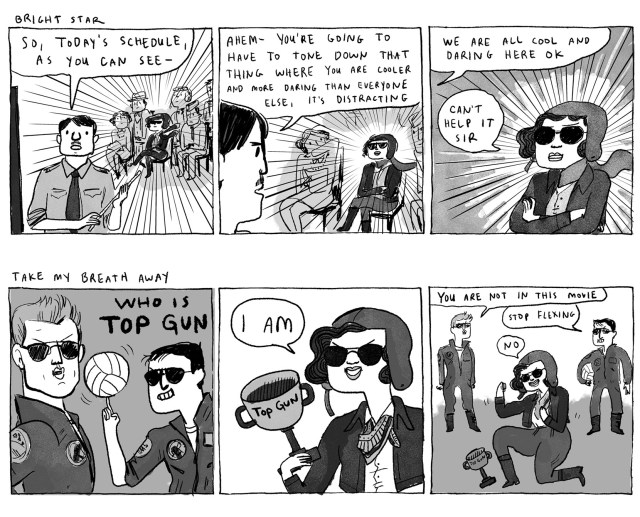 Katherine Sui Fun Cheung, the first Chinese-American woman to receive a commercial flying license in the US. from Step Aside, Pops by Kate Beaton.

Of course, when you think of Beaton’s comics, you probably think of her hilarious, educational comics about history. Step Aside, Pops definitely won’t let you down. It’s got history in spades, taking on everyone from Ida B. Wells, to America’s founding fathers (in a mall and stuck in an amusement park), to Juarez and Maximilian, to Katherine Sui Fun Cheung. Whether you’re a history buff or someone who only pays attention to history when it’s being taught to you through three paneled comics, you’ll be sure to not only learn a ton from this book but have a great time while you’re doing it. With Step Aside, Pops, Beaton is solidifying her place among others such as LeVar Burton of Reading Rainbow and Bill Nye the Science Guy at making one’s audience fall in love with a subject that in school can oftentimes seem boring and uninteresting.

History, however, isn’t all you’ll find in Step Aside, Pops, it’s full of hilarious and cutting versions of beloved literary figures including Cinderella, Cathy and Heathcliffe, Mulder and Scully in the world of Pride and Prejudice, (tiny) Hermione and of course, Nancy Drew, that could only have come from Beaton’s wonderful mind. Beaton’s fully original comics are just as sharp. Whether she’s taking on sexism with her Strong Female Characters or Straw Feminists (and honestly, the book’s worth it just for those comics alone), or she’s showing the life story of one of Janet Jackson’s “Nasty Boys” over the course of an eleven page comic, she never once rests on her laurels; she’s always bringing her A game. 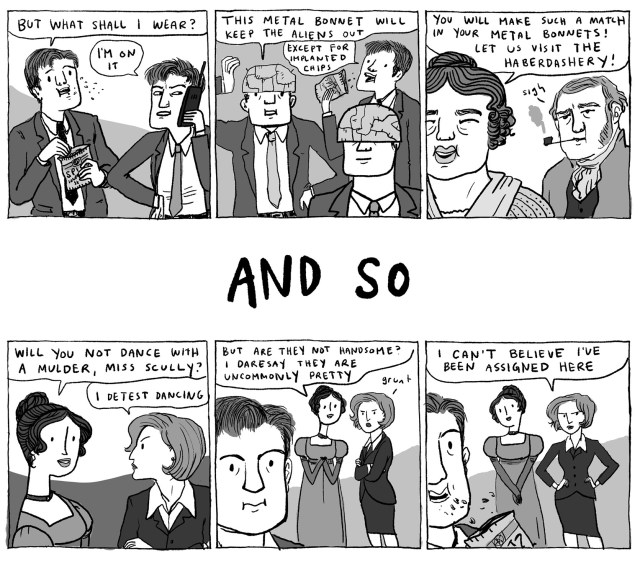 From Step Aside, Pops by Kate Beaton.

Bottom line, this book is exactly what what you’d want out of a Hark! a Vagrant collection and it showcases exactly what it is that makes Beaton’s comics so great at capturing the imagination of modern-day readers. Its sense of humor is at once clever, biting, absurdist and highly quotable, as well as being eminently re-readable. Plus, there’s so much packed into this book that you can spend hours and hours pouring over it and still be able to find new jokes and new bits of information. If you’ve never read Beaton’s comics before, this book will get you hooked right away; if you’re a longtime fan, it will make a great addition to your collection. Beaton is one of the finest and funniest comic-makers out there today, and she was wonderful enough to answer some questions for me. 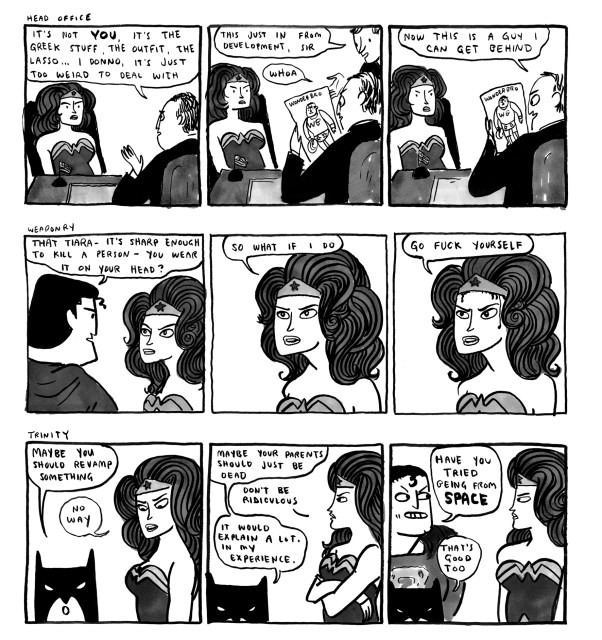 From Step Aside, Pops by Kate Beaton.

Mey: Your versions of Wonder Woman and Lois Lane are both some of my favorites, especially when they’re interacting with other comic characters. How do you imagine a meeting of the two would go?

Kate: They are two Golden Age comics giants! They would get along very well I think. Superman and Wonder Woman are often together in comics and tv shows, I wonder has there ever been a Wonder Woman and Lois Lane thing? There was an episode of Batman the Animated Series, I think it was called “Harley and Ivy,” where Harley Quinn and Poison Ivy get together and I remember them driving around in a stolen car. You wouldn’t have thought about it, but I remember seeing it and then thinking “where has this been all this time! This is great!” Which is probably what you’d think about a WW/LL team up. I feel like they would be chomping on cigars, somehow. I am always drawing people smoking! 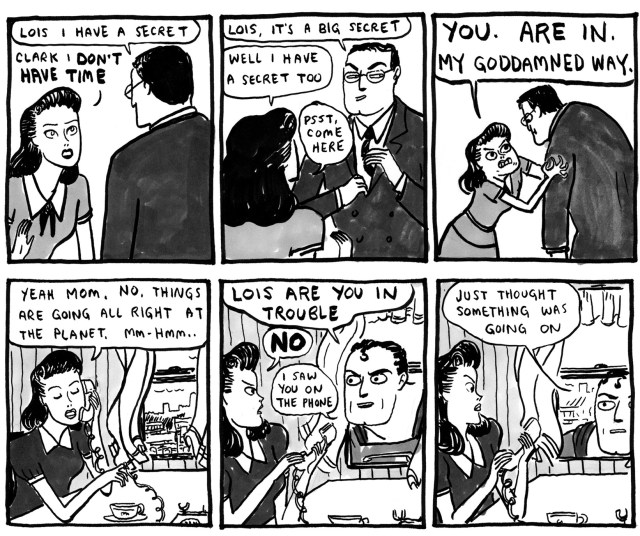 From Step Aside, Pops by Kate Beaton

Mey: You make a lot of comics about women who have absolutely had it with the men in their lives and won’t even pretend to put up with their nonsense any more. What is it about women who do that that speaks to you?

Kate: Do I? I suppose I do. I think that what’s really happening there is that women in history or literature are often presented to us as sort of second-tier importance. We hear less about them, we study them less, representations of women are likely to be “less” somehow. So in the comics, I often pit them against this positioning in history, looking for justice or something like that. Finding comedy in the imbalance that is apparent to us as modern readers. Then I think they are often looking exasperated by the men around them, not because the men are bad, but because the men have always been presented to us as more important, and then in the comic, they play into that, and the woman has just had it.

Mey: In the book you say that Ida B. Wells is your hero, and that if others knew more about her, she’d be their hero too. If you could only tell people one thing about her, to get them hooked and wanting to learn more, what would that thing be?

Kate: I don’t know if there is any one thing. You can say that she was brave and intelligent and all the rest. But this was it for me.

In March 1982, Thomas Moss, Will Stewart, and Calvin McDowell were lynched in Memphis by a mob. This happened, in short, because Moss owned a grocery store called The People’s Grocery, and he was black, and he was taking away business from the white grocery stores. Moss was a friend of Ida Wells. You can read about The People’s Grocery and the lynching here — but look, it’s bad. I cried when I read about it, and I wanted to vomit. It’s that bad. I don’t know what is taught about lynching in American schools. But whatever it is, whatever you think you know about it, it’s worse, it’s 100 times worse. It’s evil, and people should know how evil it was. That is what Ida thought. And she wrote about it. A black woman in Memphis in 1892 writing and publishing a criticism of lynching aimed at people in her back yard. Who was there to protect her? No one. She bought herself a pistol and she wrote. And when they came and destroyed her printing press, she left the city and she kept writing. That same year, she published Southern Horrors: Lynch Law in All Its Phases. The same year! She put her picture on the cover of it! Like, holy shit. And you read her writing, god, she knew how to say what she meant clearly and she knew her audience. But you think of that — her parents were slaves. Her friends were killed and no one was ever charged. Any black person defending themselves or anyone else from injustice might be signing their own death warrant, and here we have this woman who is not beaten down by it, but galvanized by it. She was going to fight for change though it might take everything she had, in the face of unrelenting violence and barbarism. It’s courage I can’t even dream of, it’s heroism of the highest order. 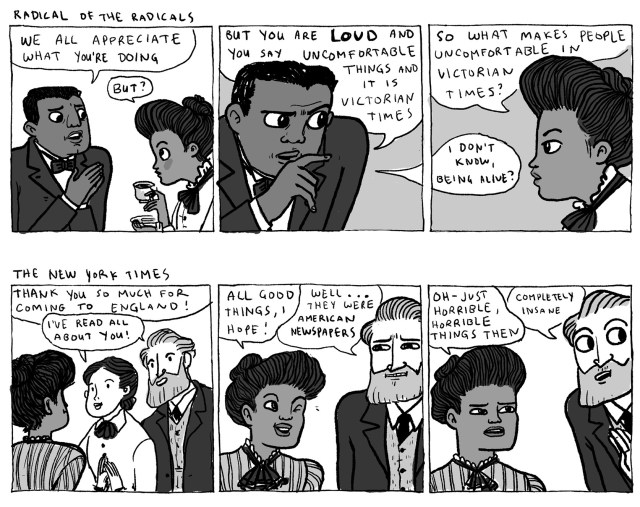 From Step Aside, Pops by Kate Beaton

Mey: As a child, who were some of the first historical figures you were drawn to?

Kate: As a child you kind of only get what people give you, in a sense. Maybe now kids are googling all kinds of people but for us it was “open your textbooks, we are going to read about Confederation.” I remember being really, really fascinated by the Filles du Roi — these boatloads of young French women sent to New France in the 1600s to boost the French population, because it was mostly dudes fur trading and whatnot at that point. They needed to even out the population, and promote growth. So for different reasons, these young ladies came over to start a new life. Many were poor orphans, and “poor orphan” stories are basically kid-lit bread and butter. I think it’s easy to have been interested in them, because they were mostly young, like you were in school reading about them, and they came alone, with other girls, in this grand adventure. It must have been exciting and frightening and they must have been brave and naive and a lot of things. They certainly had a hard time learning to farm. But they had a surprising amount of freedom to choose — to back out of a marriage contract, for example, if they found the guy not a good fit. I think that was because the French government wanted the business of settling to go smoothly. And a lot of them did cancel their contracts, and make other ones. They are very fascinating, and they have names and documents and things which is not always a given for girls, and they are important on their own, not just presented as someone’s wife. They are the Filles du Roi, The King’s Daughters.

I was also very interested in Saints, because I grew up Catholic, and we had so many of those Saint books for kids and they were all gruesome and amazing to read. Saint Francis of Assisi was the best one though, because you’d want to be his friend, and hang out with all his birds and animals in the woods, and he just seemed so happy always. And no one ever stuck a knife in his eyeball or set him on fire or any of that nasty martyr stuff. He was just a chill guy living a nice life.

Make sure you remember to go and vote for all your favorite comics and creators in the ASCAs! You’ve got less than a week left to vote!

Moomin and the Martians (Drawn and Quarterly)

Jem and the Holograms #7 (IDW)