Aren’t comics anthologies just the best? You get to see a whole set of comics by different people, but all on a theme that, as long as you decided to read the anthology, you know you’re interested in. This week in Drawn to Comics, I’m going to talk about one comics anthology that I already love, Fresh Romance, and another that I haven’t read yet, but can’t wait to, The Oath Anthology of New Heroes.

To start off with, I just want to say that the cover for Fresh Romance #4, done by Batgirl artist Babs Tarr, is absolutely gorgeous. Now, on to the comics inside the book. First up is “School Spirit,” about two sets of high school couples who have to keep their relationships secret, one because it’s a pair of girls and the other because it’s a witch dating a non-magical person. Malie, one of the girls in the non-witch relationship, is hosting one of those cool high school parties you’re always hearing about. She sees her secret girlfriend, Justine, walk past and go inside with Miles. Then she sees her secret girlfriend, Justine, walk up to her while she’s talking about the upcoming prom. It turns out Corrine was using a little bit of her magic to “borrow” her face, this of course makes Justine angry, and in the commotion, one of Malie’s dad’s guitars gets broken. By this fourth issue I’m all in on these couples. I love these characters and I’m going to be very impatiently waiting to find out what happens to them in the next issue. 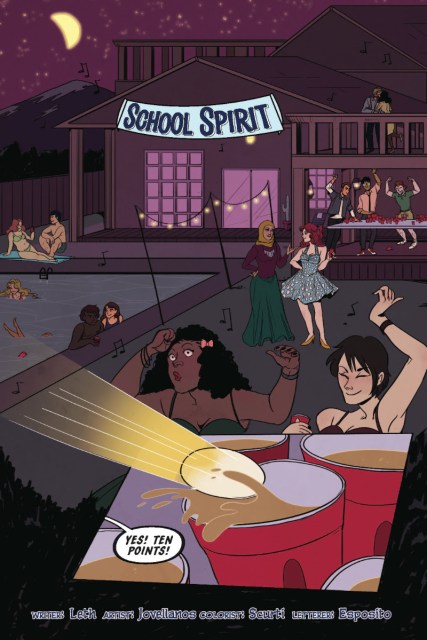 “School Spirit” remains my favorite comic in the series, you can see writer Kate Leth’s love for Archie Comics on every page. It’s high school drama at it’s highest and most dramatic and it scoops you up and takes you along for the ride right along with it. Also, I don’t think I’ve talked about the art enough in this comic, especially the coloring. I love how deep and saturated all of the colors are. It’s wonderful and makes me keep going back to look over every page again and again. Arielle Jovellanos and Amanda Scurti are just killing it. 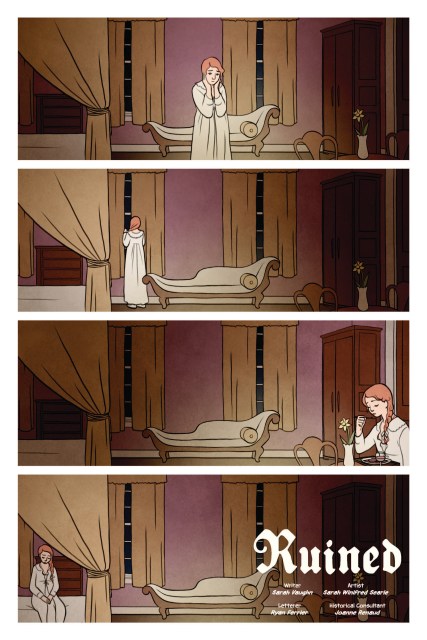 The next story, “Ruined,” takes the next logical step on its path as a classic regency romance, giving us a bedroom scene to follow its wedding. This installment is tough, as Catherine and her new husband are having sex, Catherine clearly becomes uncomfortable, presumably because of the “great shame” that the comic’s been hinting at since the beginning. How can you not help but desperately feel for Catherine? You can see the pain all over her face. It’s heartbreaking. The art is really gorgeous; it’s soft and delicate and the scene with Catherine and her new husband handles its extremely uncomfortable subject perfectly.

To remind you that this is an anthology, the stories can be wildly different just like the next one which changes the mood right away. If you’re looking for laughs and tons of drama, “The Ruby Equation” is perfect for you. It had me laughing out loud at Ruby’s complete lack of understanding of human dating and relationships (a line about a wombat suitor was adorably funny) and then wincing and anticipating a huge disaster just a page later when Ruby accidentally gets too close to the actual people she’s trying to hook up together. Next month we get to see the thrilling conclusion of this comic and I can’t wait to see how Ruby deals with the mess that she’s gotten herself into. You can buy Fresh Romance online at comixology or from the Rosy Press site. Fresh Romance isn’t the only online anthology I’d like to talk about though. 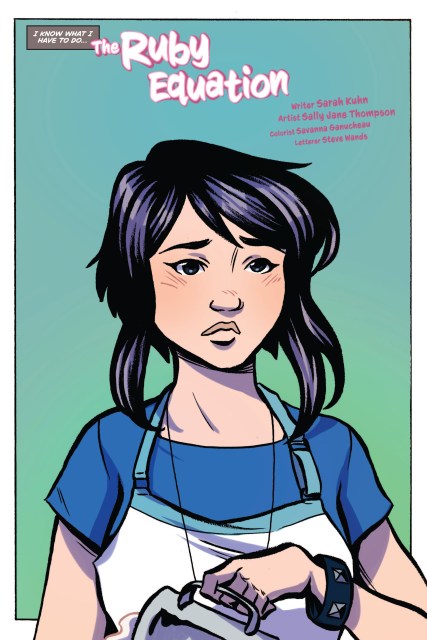 Definitely one of my favorite things about Kickstarter is that it’s lead to the rise of even more of these types of queer-friendly comics anthologies. Just recently we’ve had books like Chainmail Bikini, Love in All Forms, Beyond and many others. One such anthology that recently caught my eye is called The Oath Anthology of New Heroes and its purpose is to not only feature comics about lgbtq+ heroes, but also highlights the work of queer creators.

In this 240+ page anthology, all of the stories will be empowering and will feature heroes who are unambiguously queer. One of the stories it will feature is “One Dress, With Cape,” about a young hero-in-training named Oli. Oli’s picking out his first super suit, which isn’t exactly what his parents thought it would be. There are also stories like “Princess Cappuccino: No Sugar!,” about a 21 year-old barista and superhero who has a big crush on Polly her supervisor and “Fear My Identity” about a poly superhero who has to deal with an attack from a local group of bad guys. 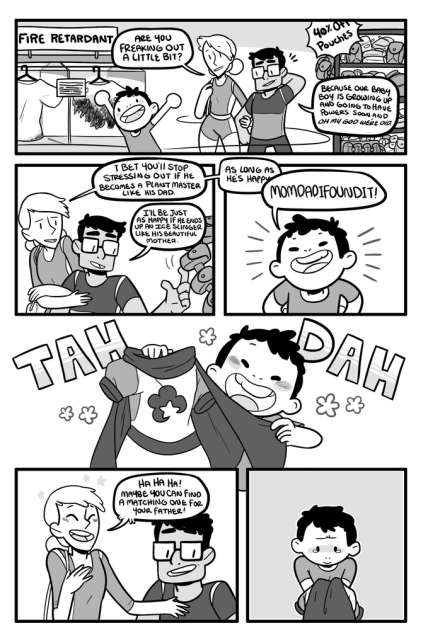 From “One Cape With Dress” by Steve Foxe and Rian Sygh

Queer representation is important, that’s why I highlight comics featuring queer women here in Drawn to Comics. By having queer representation in this all-ages anthology of stories specifically about heroes, editor Audrey Redpath hopes that she can help queer readers, whether they’re kids, adults or somewhere in between, a chance to see themselves represented in this genre that can really have a huge effect on the way they see themselves.

Superheroes give their readers a context to imagine themselves with the power not just to do good, but to create positive change in their lives and the lives of others. This kind of fantasy shouldn’t be unique to straight readers. With the Oath Anthology of New Heroes, we want to create a book that showcases superheroes and comic creators across the spectrum of queer identity. 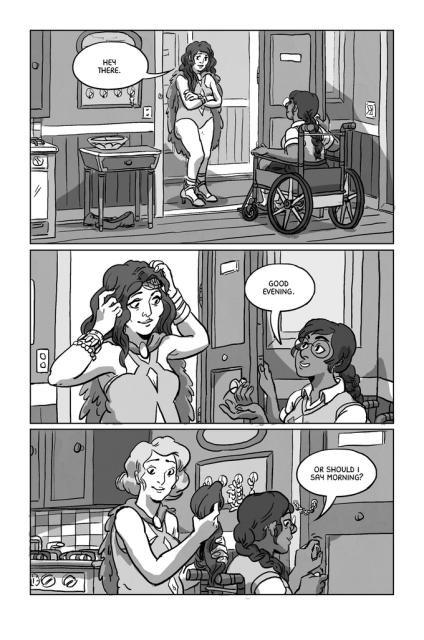 From “Darkling” by Sarah Winifred Searle and Carey Pietsch

This anthology has some really exciting contributors. They’ve got Sara Goetter (who made that awesome comic “Haircut”); Sarah Searle, the truly wonderful artist for “Ruined” in Fresh Romance; Carey Pietsch, the artist for Marceline Gone Adrift; O Human Star’s Blue Delliquanti; Sfé R. Monster of Kyle and Atticus and Eth’s Skin; and Mildred Louis, the creator of one of my top favorite webcomics Agents of the Realm. That’s the other thing that I love about the rise of these Kickstarter anthologies, I get to see some of my favorite webcomic creators in a new setting and I always become a fan of someone new that I had never heard of before. The Kickstarter campaign is running until September 16 and it’s about halfway to it’s goal.

Also, make sure you’re on the lookout for next week’s column where I’ll have an extra special Drawn to Comics announcement!

Princeless: Be Yourself #3 (Action Lab)