Back in October, I wrote about the really cool upcoming queer Sci Fi and Fantasy comics anthology Beyond (which is still open for submissions until December 15). One of the people putting that anthology together, Sfé Monster is also the creator of the wonderful genderqueer comic Kyle & Atticus. This marks the second comic in three weeks that I’ve highlighted that features a good-guy robot. As someone who is constantly afraid that robots are going to be rising up against us very soon, this either shows that I’m starting to slip in my resistance to the robotic enemy or Sfé Monster just knows how to make a really good webcomic with really good characters.

Kyle & Atticus starts with our hero, Kyle, getting in trouble at school for standing up for themselves when a bully calls them names. As they walk home and talk to their mom about how things are going, it seems like it’s going to be just a normal comic about a kid and their struggles at school. Then on the tenth page, Kyle is sent to their room and we’re introduced to Kyle’s best friend, a dragon-like robot named Atticus. However, despite the introduction of a sentient robot into the mix, the comic never loses its down-to-earth charm. This first chapter is a bit depressing; first Kyle is being bullied at school and now they’re in trouble at home. But don’t worry, things start looking up soon. 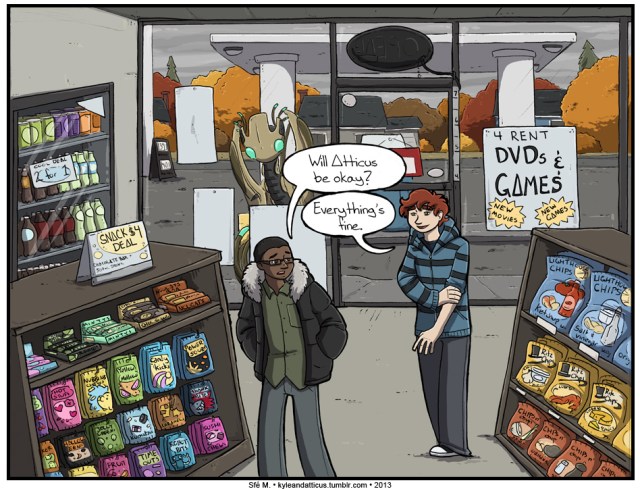 In the second chapter, we meet another one of Kyle’s friends, this one a human. Kyle’s conversations with their friend Lucas show how difficult it can be when you’re queer and your friends aren’t. Even though they’re trying their best to understand, they still mess up sometimes. We’re also introduced to Kyle’s Uncle Pat, another person in their life who supports them. This chapter helps us to get to know more of Kyle’s world and how they interact with people that they care about. It shows us that even though Kyle faces a lot of obstacles, they still have a great support system, and this is a really comforting direction for the comic. 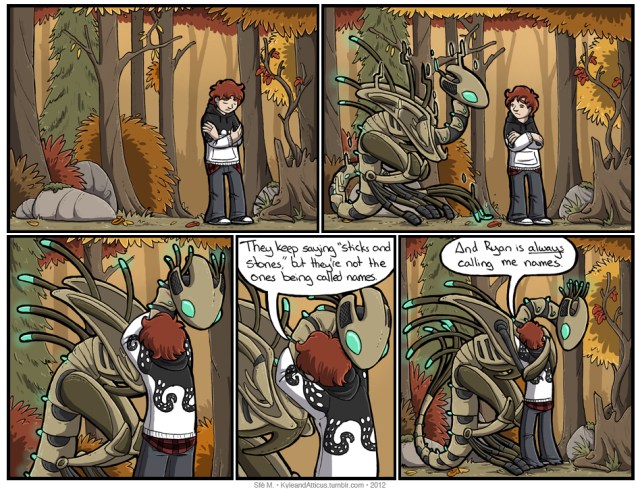 This comic touches on themes of not knowing exactly where you fit in while growing up and high school bullying that I’m sure a lot of us can relate to. Even though they have a friend/pet robot, Kyle is a very realistic character who is relatable both a a teenager and as a trans* or genderqueer person. Genderqueer characters are drastically underrepresented in media, and that’s one the things that makes Kyle & Atticus so great. Not only is it starring a genderqueer character, but it’s also written and drawn by a genderqueer artist. Because he is genderqueer, Sfé M. is able to create a wonderful character in Kyle who absolutely rings true as a young genderqueer person. Sfé has a great eye for design and detail, and the smooth, strong lines really help to give the comic a youthful feel.

Another one of Sfé’s comics, titled Seven Stories from the Sea is, as Sfé puts it, “a comic about growing up, coming out, and falling in love in Eastern Canada” and it is just as heartbreaking, heartwarming and absolutely real as you would imagine. Without using any words or color, Sfé is able to capture so many of the small, intimate and deeply personal moments and feelings that come when you’re trying to not only figure out who you are, but figure out how to tell those closest to you. This is a really special little comic that, if you’re like me, will definitely make you cry. 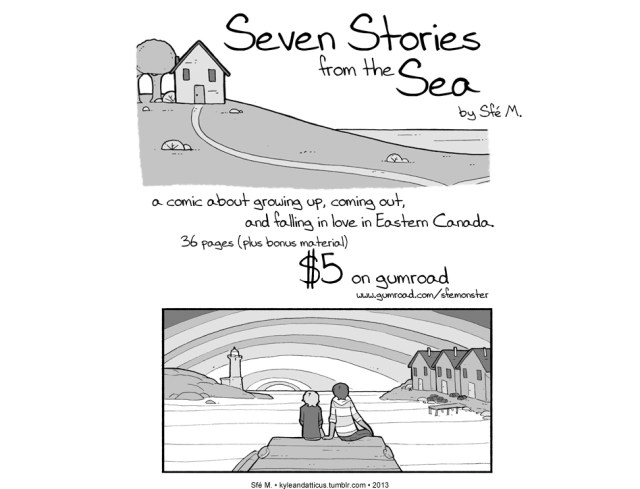 Sfé describes himself as “a genderqueer dude” who uses the pronouns “he and “eh.” He lives in Canada and writes a lot of comics that focus on “gender, queerness, genderqueerness, and a strong sense of all things Canadian.” When he’s not working on Kyle & Atticus or Beyond, Sfé has also done a comic for Boom! Studio’s Adventure Time comics and does the comics Weird Pets with Kory Bing which are stories about the lives of monsters. So, if any of that interests you (or if you’re just interested in reading well-written and beautifully drawn comics), you can check out Sfé’s new work or buy a pdf of his comic Seven Stories from the Sea.