I don’t own a TV, which means that when Jeff Bezos, CEO of Amazon, revealed the five-year plan to deliver packages via drone on 60 Minutes, I did not see it right away. But then the internet exploded and I watched in amazement and horror.

And here are the things my brain did, in relatively the order it did them.

1. The US government would never let this happen.

Domestic drones right now are definitely definitely not approved, though the FAA has got a plan in place to integrate them. But because of the reputation that drones have as military weapons, that might take a while – Bezos said himself that the 2015 timeline is a minimum and wildly optimistic. There are HUGE privacy concerns here, being that you will give Amazon your exact GPS coordinate location. And of course the ease with which one could use this as a weapon. If the FAA approves the Amazon drones ever, I predict heavy regulation with a side of probably never going to happen. Or at least I kind of hope it never happens? At least one other person thinks the FAA will never let this happen. Then again, Bezos has a lot of money and we all know that favor can be bought because we basically live in Orwell’s 1984/The Panem Capital now. So if it does –

2. How good are these drone pilots and how sharp are those octocopter rotors?

That’s what these drones are called, by the way. Octocopters. For the eight flight-granting but perhaps death-inducing blades that they possess. Now when I first heard about the drones, I was under the mistaken impression that someone would need to fly these from some kind of super-villain-esque layer underground or something. But no. The drones fly themselves using GPS coordinates, which I find horrifying on several different levels.

via This Appropriate Imgur Gallery

The first level is that computers aren’t super smart – they can’t really evaluate grey area. Computers are smart only as far as the humans behind them are smart. And guys, let’s be honest – those of you who work with computers, you’re smart and brilliant, etc, but how many times have you pushed code to a server as finished only to discover, like, 3 mistakes that make you headdesk? Except if someone makes a mistake with these, it’ll be a headchop instead of a headdesk. What if this lands on a human by accident and savages them? And that’s not even taking into account the countless dogs, cats, birds and other fuzzy critters that I’m thinking would be harmed while futzing around with these bad boys. Or hey, how about airplanes accidentally sucking these into their engines, should they get high enough. That’ll be terrible. Also obstacles. Can the drones navigate obstacles? Also also apparently delivery drones use batteries that are prone to explosion? So we’ll have a bunch of unmanned exploding robots flying about urban areas because the radius on these is only ten miles, and slamming into buildings, people and pets therein? Sounds like a plan, Jeff! And then of course there’s the other horrifying aspect of this – yes, you need a human to program the GPS coordinates into this, but what about the humans who deliver things right now? Which lead my brain to the next conclusion –

3. How long will it take technology to make my job obsolete via robots?

When will a robot be able to write Queer Your Tech and edit the Geekery section on Autostraddle? At what point will the computers make literature for us? Will we let that happen? Will we buy books written entirely by computers based on algorithms? I actually think people would, don’t you? We’ve been making jobs obsolete forever as technology advances, it’s just par for the course when it comes to advancement. And I of course don’t advocate for halting science. But covering any kind of nerd beat comes with a) a healthy knowledge of sci-fi novel tropes and b) a certain amount of the mindspace that’s convinced we’re only steps away from enacting them. Perhaps I’m overreacting, but when it comes to creating robots that work without people, I think we should be stepping lightly.

4. Is this the beginning of the uprising? Will we look back at this moment as the moment where it all went wrong?

This bullet point is actually lifted directly from a text message I received from my girlfriend this morning, who is perpetually convinced that the robot uprising is on the horizon and that me and my tech-savvy ways are contributing to it. She’s convinced, for instance, that my WeMo will plunge me into darkness before our computers take control. So naturally, I responded by saying that no, of course it’s not. Because that is how I always respond. But now I’m not so sure. 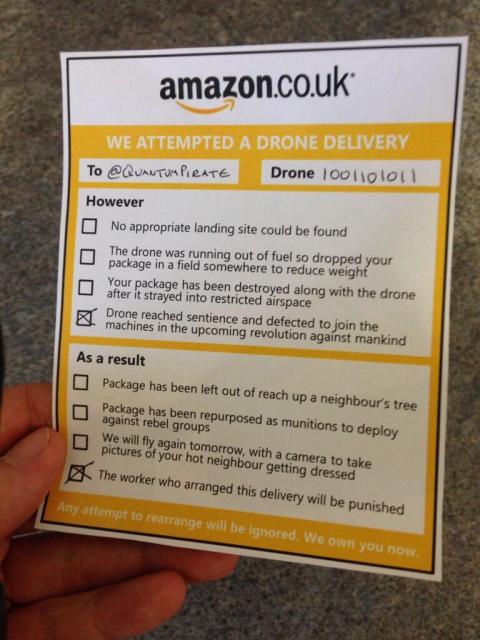 Okay, so there’s almost no way they can actually become sentient, but don’t pretend you didn’t think this too.

5. Can those with firearms licenses shoot these things down?

Should the robots all become sentient and vow to destroy us, could we defeat them? And if we could defeat them, does that mean a clever hunter can see one of these zipping by, take it out and get some free reading material and probably some toothpaste and a pair of headphones? So that raises some new theft questions, but ones I hope Amazon doesn’t answer by making these things bulletproof. I want these things to be fallible! But at the same time I don’t because then someone who orders their life-changing copy of Gender Outlaws won’t get it because their robot delivery unit is a pile of flames somewhere? There are just so many unanswered questions here!

6. Does anyone need anything from Amazon this badly?

Then again, does the person ordering their life-changing copy of Gender Outlaws really need it within 30 minutes via drone? What will happen to us as a people if everything is instant gratification? Then again, people have been worrying about the pace of life for a very long time as it gets faster and faster. Still, I can’t imagine needing anything from Amazon badly enough to require it within half an hour of it occurring to me. But then again I say that from my very specific position in life/this world/the universe. Prove me wrong? Anyone?

7. How terrifying is it that Amazon wants to be the supplier of everything?

Let’s step aside for a hot sec and analyze the fuck out of Amazon Vice President Dave Clark’s statement: “Anything you want on Earth, you’re gonna get from us.”

via this prescient imgur user

DO. NOT. WANT. I seriously don’t want to order everything from Amazon. I want to have the opportunity to support local business owners and local chains that are extremely good for my damn local economy. I want to walk into a book store! And you know what? I currently don’t have a local bookstore. Because they can’t compete. With Amazon.

8. …Amazon already is the supplier of everything.

This is both a good thing and a bad thing. Amazon ensures that independent businesses can do their thang, art can be self published – in many ways, it makes publishing and commerce accessible. Heck, we have an Amazon affiliate store and that’s hella cool! Shopping at Amazon can support your fave independently owned queer website. But at the same time the CIA is getting a private cloud on an Amazon server. The. C.I.A. Amazon controls a hefty portion of the internet, and thus a hefty portion of. Well. Everything. You can get lube on Amazon. You can get old DVDs of Boy Meets World on Amazon. You can auto-deliver paper towels via Amazon and that’s just really fucking convenient and who can argue with that? Ahhhh! THE TROUBLES OF LIVING IN A DIGITAL AGE! GREY AREA! THINGS ARE HARD! But anyways, back to this crazy drone thing –

9. Does anyone else think that these just look really creepy, even if nothing bad happens?

Likely, nothing terrible will happen. I mean, likely this is nothing more than a publicity stunt because likely it will either a) not happen b) take so long to happen that this is nowhere near what it’s going to look like. Or! Or it’s exactly what they said, and it’s a last-mile solution. That means a delivery human will drive a truck out into a rural area and release, like, five or six of these things to help with the last bit of delivery. That’s a thing that could happen too. Or! OR! Someone will realize that with all the product damage and accidents that are bound to happen with this, it is more cost effective to hire someone to drive around in a van with some Amazon packages. But even if nothing else… 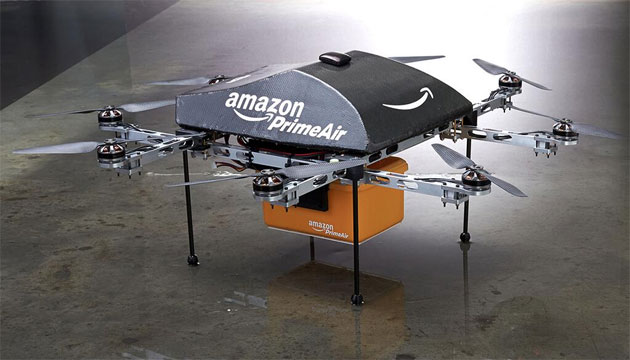 It’s smiling at me.

Like it’s ready to feast on the blood and dreams of the human race. 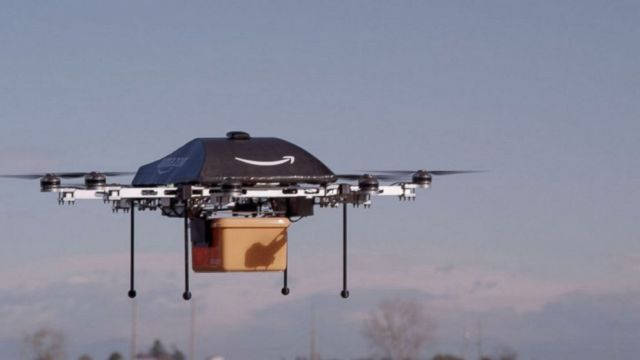 Is it coming for us?