I remember when I first heard about the upcoming Gamer Girl comics anthology Chainmail Bikini. It was on a tumblr post made by its editor Hazel Newlevant, who was one of the first people I covered in Drawn to Comics and still remains one of my favorite independent and online comic creators. Immediately I thought that in a lot of ways, Chainmail Bikini is a dream come to life for Drawn to Comics. There’s the obvious: it’s full of great comics by a bunch of incredibly talented women. But also it’s on the very timely topic of women in gaming, a lot of the comics talk about gender and sexuality and it’s just plain super geeky. 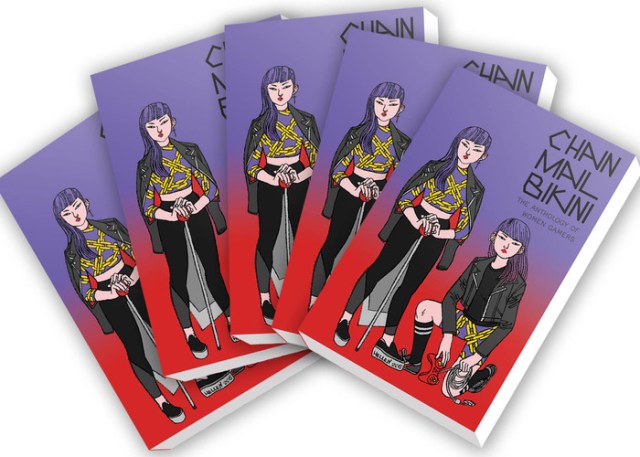 All throughout my life, RPGs have been one of my favorite past times. As kids, my brother and I weren’t allowed to play video games, so we invented our own games. We had a pen and paper version of the Pokémon video game and a pen and paper RPG that took place in the Star Wars universe. At different points in my life, I’ve also dabbled in Dungeons and Dragons and fully committed myself to games like Skyrim and Dragon Age. Basically, what I’m saying is that I love RPGs, and that this anthology tapped right into all the feelings and memories I have related to them. Reading it was a wonderful trip down gaming memory lane.

Chainmail Bikini comes at a time when there’s a very vocal, annoying and sometimes dangerous group of male gamers who think that women have no place in gaming culture and deserve no say or positive representation in the games that we love. In a lot of ways it’s a direct response to that. According to Newlevant’s introduction in the book, she had two specific goals when putting this anthology together.

One was to collect comics by an outstanding group of female artists about games and what they mean to us. The other was to celebrate the experience of women gamers, at a time when our presence in gaming culture is consistently marginalized. The term “gamer” encompasses players of all sorts of games, from video games to Dungeons & Dragons to LARPing. What ties all these games together, and separates them from games like checkers or football? In my view, the common element is that of taking on a character and entering another reality. The comics in Chainmail Bikini explore why we’re drawn to these fantasy worlds, and what roles they serve in our real lives. 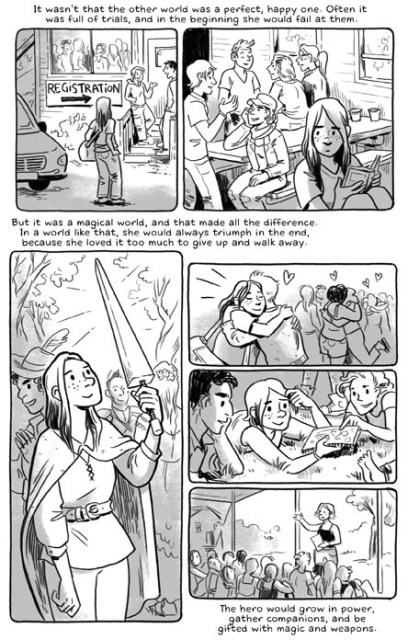 from “A Certain Kind of Story” by Molly Ostertag

Several people who have had their comics featured here on Drawn to Comics have comics included in Chainmail Bikini, including the previously mentioned Newlevant, Strong Female Protagonist artist Molly Ostertag (whose webcomic, by the way, has a super compelling storyline right now), Annie Mok and Sarah Goetter. Our very own Saturday Morning Cartoon artist Yao Xiao even contributes a comic about finding her passion in life through computer RPGs and online gaming in China.

That’s a fairly common theme in the comics, with stories of diverse women and girls hitting their stride or feeling like they finally found their place once they started playing tabletop, online or other role playing games. Some of these even discuss how the authors were able to discover or explore their gender identity or sexuality through the fully immersive and uniquely customizable worlds that RPGs allow you to inhabit. Others are just fun, interesting or exciting looks into the reasons we all love gaming. 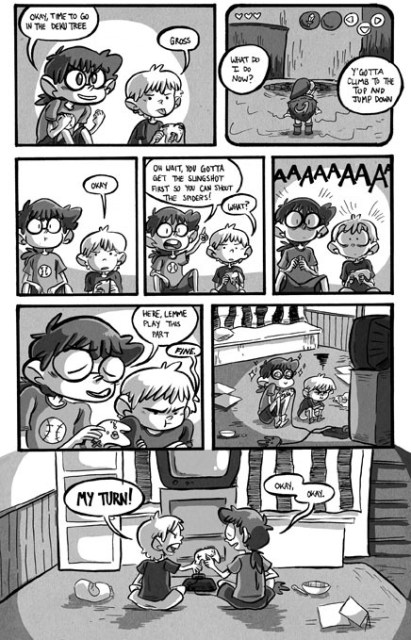 from “Let Me Do It” by Sara Goetter

The Kickstarter campaign launches today, March 3rd, and hopes to raise enough money to print the 220 page 6″x10″ book and pay the contributors. There are a lot of great rewards for contributing money to the campaign, from a DRM-free PDF for donating $10 to a paperback copy for $25 to much more unique rewards, like a unique drawing of one of your video game or RPG characters done by Ostertag or Meghan Lands or original art from Katie Longua or Kinoko Evans. On the Kickstarter page you can find out more details about where the money goes (the majority goes to printing costs and paying contributors) and see a full list of the artists and writers who have work featured in the anthology.

This anthology succeeds in so many ways. It shows that there is a huge number of diverse women who love gaming, in all of it’s iterations, and they all love it passionately. It shows that there are a ton of great women comic writers and artists that we should all check out. It shows that women have unique and valuable opinions on games and gaming culture (although I’m sure most of us already knew that). Perhaps most importantly, at least on a personal level, it shows me that i really want to start playing RPGs again. 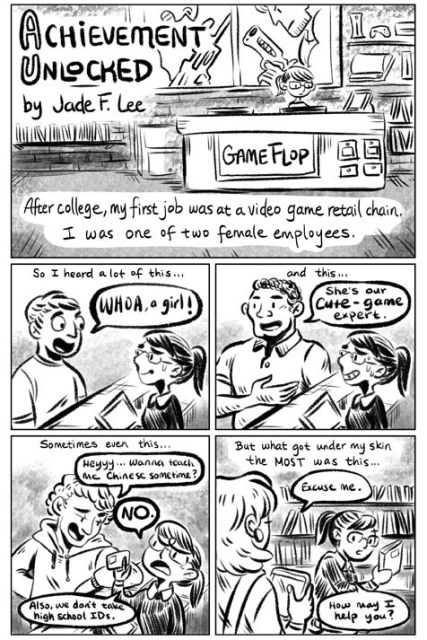