We spoke a while ago about the “hot new trend” of trans models being the “it girls” of the fashion industry, and how that entire discussion is fundamentally “transphobic and also stupid.” There was the hope that maybe at least the people who buy that would get bored and move on, but apparently not! The exotifying fascination with trans models, especially with Givenchy’s Lea T, lives on. Specifically, it lives on in a frenzy about the new cover of Love magazine, which features Lea T doing sexy makeouts with cis supermodel Kate Moss. Are you ready for this? No, me neither. 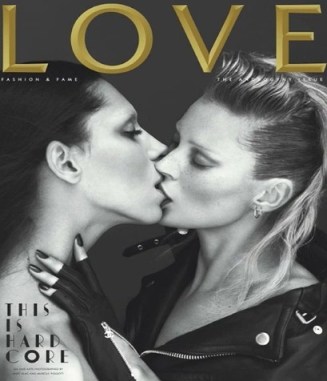 The first thing one notices about the media discussions of the cover are the rampant and unapologetic transphobia.

+ “Who is Lea T? If you don’t know her (or him) you will once you get a gander of the upcoming cover of Lovemagazine in February.“

+ “What was once seen as freakish, and even taboo, has gone mainstream.” (Good thing trans people are no longer perceived as freakish or taboo! That must have sucked.)

+ “The transgender trend is also making waves Down Under. Androgynous Australian Andrej Pejic has become a hit in the international modelling world for his pillowy lips and his ability to fool people into thinking he is female.” (Yes, “fooling people” w/r/t your gender is exactly what the “transgender trend” is about.)

Including two of our personal favorites: wondering why anyone would ever stoop to touching a trans person, and playing the “But I don’t even SEE [marginalized identity]” card to avoid talking about it.

+ “Enter Kate Moss, and you have many scratching their heads trying to make sense of why Moss delivered the timeless kiss in such a provocative, open-mouth manner. She’s not short on stardom, and should still have a lot of dead presidents in her bank account.”

+ “Love’s editor-in-chief, Katie Grand, confessed her adoration of Lea T to London’s Telegraph, gushing, “I was by the pool at the Copacabana Palace Hotel when I saw her. At first I didn’t notice her gender, just that she was wearing Givenchy couture and looked amazing!” 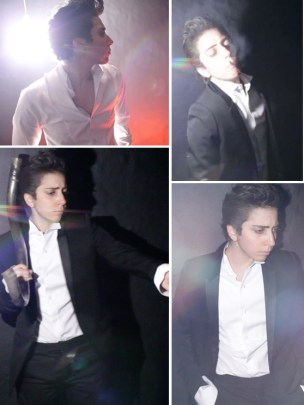 After the blind rage fades a little, though, one notices how little sense any of these press reports make?

+ “Hell, while we’re on boy, what about Beyonce’s song, If I Were a Boy? Remember the Madonna-Britney Spears kiss? Enough said!”

They do talk about Lady Gaga a lot for some reason though, which I appreciate.

+ “Perhaps the meat-dress with Lady Gaga and her photo-shoot as a boy for Vogue rings a bell.”

+ “There was Lady Gaga gracing the cover of a Japanese Vogue Homme magazine as her male alter ego Jo Calderone, while fashion designer Marc Jacobs also dressed in drag for the cover of the latest Industrie magazine.”

+ “[It’s about] ambiguity. Lady Gaga is someone who is at the forefront of this.”

The takeaway is this: if you remove the transphobic flailing, the snarky speculation about Kate Moss’s “reputation,” and the name-dropping of celebrities like Lady Gaga and James Franco likely included for SEO purposes, really all you have left of these articles is a headline. So why write them at all?

If you take the gender panic out of this scenario, the truth is this is not a newsworthy or even a gossipworthy story. This is a fashion model kissing another fashion model for a fashion photo shoot; they are both very attractive, it’s a beautiful shot, and an impressive magazine cover. That’s all.

Honestly, there is nothing to analyze here, and that’s coming from a publication obsessed with the analysis of gender in mainstream culture to an arguably unhealthy degree. Or if there is something to analyze, it isn’t why one beautiful woman is interacting with another beautiful woman in XYZ way on a magazine cover; it is their job. The end. The thing worth looking into is why at least a half dozen media sources (including this one, to be completely fair) have decided to spend their time and yours picking it apart. The AP Stylebook dictates that journalists should always use a trans person’s self-identified pronoun when reporting on them; maybe it should also state that if your story collapses without a central pillar of transphobia, then it shouldn’t be written at all.